[VoxSpace Selects] The Family Man : A New Feather To The Cap Of Changing Indian Entertainment Scene

Posted on October 1, 2019 by Vishnupriya Rajesh 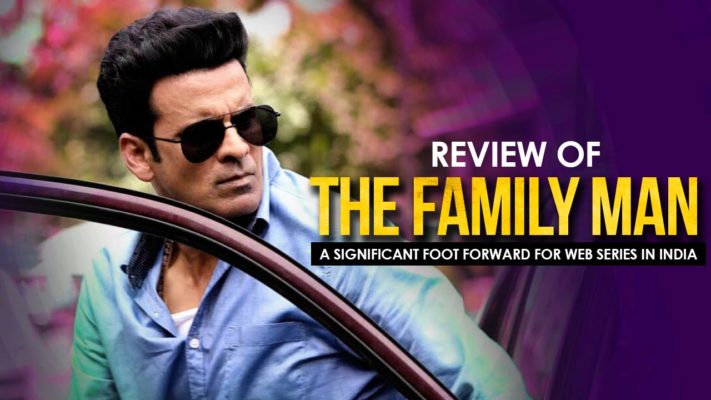 Okay I know it’s been over ten days since ‘The Family Man’ released and this is a really late review. But having heard and seen so many good things about this series, I had to watch (read binge watch) it at last. I wasn’t very impressed with the trailer and so I stalled watching it. But after watching the first episode, I realised what a blunder it was.

‘The Family Man’ is an Amazon prime original series directed by Raj Nidumoru and Krishna D K starring Manoj Bajpayee and has Sharib Hashmi, Priyamani, Neeraj Madhav, Pawan Chopra, Kishore Kumar, Gul Panag playing other significant roles. This is a story of a middle class man who works for an investigative agency without his wife’s knowledge. When I say ‘middle class man’, I am not talking about those who travel in cabs and chill in malls every weekend and claim themselves to be middle class because they don’t own an Audi. I am talking about an actual struggling middle class government employee who takes a local metro to work every day, has roadside vada pav and other street food and most important of all, dreams of having an ‘Apna Ghar’.

‘The Family Man’ shows the story of one such middle class man. The writers of this series made sure that the authenticity of a middle class family and the city of Mumbai is kept intact in literally every single frame.  There are no fancy shots of Shahrukh’s house or famous beaches. Instead, you’ll watch apartments with cement patches covering the cracks, a middle aged man meditating amidst the chaos of the hustling city. And that is extraordinary.

As the name suggests this show is not just about Srikanth (played by Manoj Bajpayee) and his family life. It has a much bigger plot hovering around smartly placed sub plots and connections. A whole track, which takes most part of the series, explains Srikanth’s work life and runs a commentary about various mild and major concerns of the country today. This element makes the show extremely relevant and contemporary.

Although I was very skeptical about the whole terrorism and Pakistan angle, I was soon convinced that this show doesn’t have the regular portrayal of Pakistan but has something more sensible to offer to the viewers. And I was not disappointed. The writers won’t make fun of your intelligence with baseless dialogues and polarisation. Instead, we find a bunch of sensible points of view and logics. The story picks up halfway through with interesting twists and the stakes get higher and higher keeping you at the edge of the seat with each episode.

Some of the biggest advantages to this show is its cinematography and perfectly suitable locations. There are several long tracking shots particularly during shoot outs and fight sequences and they’ll keep you glued to the screens. It feels like you are walking along with him (Srikath Tiwari) following the target and you’ll be startled when he is and move when he does. Almost all the locations and sets look and feel natural.

The music is fantastic and uses every possible way to get you hooked to the story. The background score is used at the right moments and increases the intensity of the scenes. Particularly the songs used during the end credits of every episode are remarkable.

Characters And Casting : Biggest Assets To The Show

My love for flawed characters is nourished in this series and how! Srikanth is not a hero or the saviour in this story. In fact there’s a point where he loses hope and calls himself a looser and you will believe him. The writers will make you do so. He struggles, fails, makes mistakes, acts stupid, shows his insecurities (love the scene where he talks about emojis and WhatsApp texts to JK Talpade) and that’s what makes his character and story extremely relatable.

Coming to the other characters, there’s no one single villain or main character in this series. Everybody gets to play a key role in some way or the other. Even the youngest actor, Vedant Sinha as Srikanth’s son Atharv adds so much to the plot and explains Srikanth’s character as a whole. It was such a delight to watch Priyamani play something so meaningful after forever. Another most impressive thing about this show is the inclusivity shown during the casting. People from various industries have played crucial roles. Sundeep Kishan shines in an extended cameo role. Neeraj Madhav does a tremendous job as Moosa. The actor’s language and accent has been cleverly used by the writers. There’s no polishing of the slang or bringing someone from Punjab and claiming them to be a south Indian. The casting is done very appropriately and it only acts as a strength to the series.

A Few Hiccups And An Immense Scope

Despite loving the show, there are a few (very few) things that didn’t work for me. There are some really silly exposition scenes trying to make the surprises or reveals too simple for the audience to understand. The story balances both the family and work life of Srikanth but during the second half of the series, the family part takes a back seat and the bigger plot is shown more. I wish the conflicts in his family life were explored more. Few of the tracks opened interestingly but got nowhere. There are so many strings that are left open which I am sure will be used pretty well in the seasons to come owing to the immense potential of this story.  A few scenes with Pakistani army or government discussing things seem too unnatural (and sometimes funny) for the plot and intensity it’s gaining with other scenes.

On the whole, ‘The Family Man’ is definitely my second favorite after Made In Heaven from Indian entertainment industry.  This series definitely stands as another example to show that the Indian Entertainment scene is changing for better. Looking forward to more such really authentic and smart writings from these writers and more seasons to this incredible story. Go binge it soon on Amazon Prime!