VoxTalks With Rahul Ramakrishna : “Acting Isn’t A Singular, Monolith Skill; It Is A Culmination Of Talents” 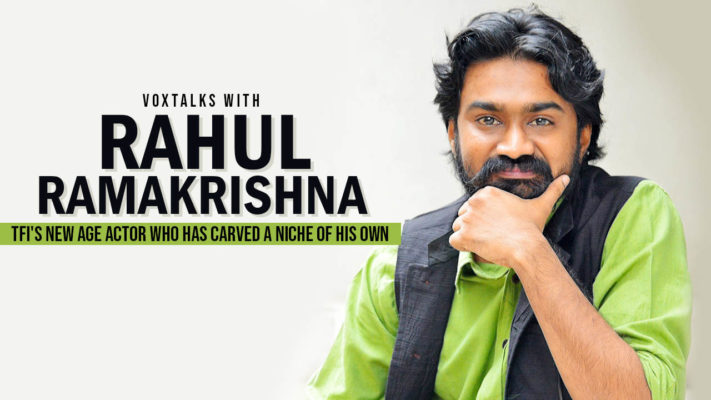 Rahul Ramakrishna, who is known widely for having played Shiva from Arjun Reddy, shares his experiences about how Tharun Bhasckar found him to be a perfect fit in Sainma, working with Vivek Athreya and Prashant Verma, importance of reading for an actor, greatness behind an actor’s performance and how to remain consistently inconsistent before accepting a role or character and how to avoid being typecast in this pressure-induced industry. We at Voxspace got to have a chat with the multi-faceted actor, film and music connoisseur and mainly, a humble human being. Here are a few excerpts from our candid interview:

This year has been pretty eventful for you so far. People have been praising your performances immensely. Was there anything unique about the feedback you got this year?

Well, this year saw two extraordinary films heading for release on the same day- Kalki and Brochevarevarura. The reviews that poured in came with a volley of appreciation with renewed demands to see me lead a film. All of this was certainly overwhelming.

You have delivered a couple of blockbusters this year – Brochevarevarura and Kalki. And your performance in these movies was loved by both the audience and the critics. How difficult is it to maintain this level of consistency and how has your experience been, working in these movies?

I count myself very privileged to have worked with immensely talented filmmakers like Prasanth Varma and Vivek Athreya, both of whom have a remarkable approach towards storytelling. The need to always be immaculate with performances leads to a creative burnout which is a common but inevitable part of an actor’s life. And in order to work my way around this difficulty, I am very, very, selective with the characters and films I am offered. Volume and consistent screen presence may sound great but it leads to a creative burnout or in worse scenarios, an audience bored with your work.

Let’s go back in time when you didn’t decide to get into acting. How did you see acting as a profession and what were your plans for life back then?

Rewinding my life back to the days when I was freelancing between reportage and cookery shows and writing film reviews while, also working on research projects for government think-tanks about the implementation of laws and rights, I had never ever thought I’d find a place in cinema and do well for myself there. I had immense respect for acting and filmmaking at large, owing to some really important people in my life being stalwart theatre gurus and filmmakers, but I never imagined being in this profession, not even in my wildest dreams. All I wanted to do back then, was find a steady, consistently paying job and make enough money to hang around the street corner with my friends pursuing the fine art of wasting time.

You started acting with Sainma, one of the best Telugu short films in this decade. How did it happen? And what are the major differences while working in a short film and a feature film?

Sainma happened because Tharun Bhascker decided I was a good fit for his film. He has a wonderful knack of convincing people to work with him and he used this charm to help me face the camera (when I had zero experience in it until that point of time). The rest of it was an organic process that helped me discover an unknown side of myself. I am indebted to Tharun for taking that chance and turning my life around in a strange and magical way. As for the difference between short films and feature-length films, there isn’t any stark kind, except perhaps the way in which one’s craft and skills are implemented.

What makes an actor great? And is there any process that you follow after accepting a role. And, what advice would you give an upcoming actor?

Ahhh, now this is a fun question. I measure an actor’s greatness in their approach towards their work. Acting isn’t a singular, monolith skill. It is a culmination of several varied and layered talents such as speech, diction, emoting, movement, memory retention, song, dance and rhetoric to name a few. A good actor maybe, one who can perform. But a great actor is someone who can communicate via a performance. I have always stressed upon the importance of reading, which sadly is a habit a lot of actors lack these days. Because films and characters and stories are always written, thereby reading is a compulsory habit for an actor.

And one cannot be an actor if one does not have the habit of reading voraciously. I say this to all my fans and upcoming actors – start reading. Invest in observing your own selves, observing the world. Watch films, anything and everything you come across, do not be restricted to one language. Learn a craft, be it singing, dancing, miming, mimicry, anything. And stick to a constant routine of practice. One must constantly practice their skill set in order to achieve finesse.

You have varied professions attached to your name. Journalist, songwriter, screenwriter, actor.

a. How did this foray into journalism and cinema begin?

I began as a journalist because I had to fend for myself using the only skill, I was good at back then- forming a couple of decent sentences and putting them on paper. Reporting in Hyderabad taught me a lot of things – that I was horrible at writing (at the start), that my observational skills needed honing and that I needed to put myself into a discipline considering the number of work hours involved. Years into this profession, I started writing reviews of films after constant prodding by my Chief Editor, Mr Dean Williams back then. This affinity towards film review writing brought me in close contact with filmmakers of all kinds. And that is how the story began.

b. Can we expect you to write and direct a feature film or web series sometime in the future?

Yes! I am currently writing a feature film that I hope to direct soon and it will star my very good friend Vishnu from Sainma.

You’re a really good singer and a songwriter as well. Are you planning to post any of your work online and sing more songs for films?

I have begun to take music classes to restart my solo singing efforts, which is something I’ve neglected for over a decade, thanks to my erratic professional schedules, and also, I’ve begun writing songs (again) for bands and musicians in Hyderabad.

You’ve been in the industry for almost 6 years now. How has the journey been like? And looking back, is there anything that you feel you could have done better or a situation you could have dealt differently?

I have had some immensely satisfying experiences with my stint in the film fraternity here in Hyderabad. And these experiences are part of a process of discovering new friends among the people here, unexplored areas of interests and challenges that I could never imagine. I do regret making some mistakes- some films that I had to associate myself with because of my foolhardy habit of placing unwarranted trust amongst strangers. I have realized that it’s a particularly visceral quality in a person to not accept responsibility of their lackluster work and instead lay blame on their actors through public defamation. I hope these people have now realized how petty and amateur they are, not just with work but at dealing with human relationships on a fundamental level. I wish them well with all my heart.

Talking about the future, what all projects do you have lined up? And can your fans expect any surprises from you?

The coming year is lined up with a lot of exciting work and some big releases of which I am a small and humble part of. As for surprises, you will see a few!

Currently, Agnes Varda and Bong Joon Ho. But give me a Mira Nair or a PTA (Paul Thomas Anderson) or a David Fincher or an RGV (Ram Gopal Verma) film any day and I’ll gladly drop everything to watch and praise their ingeniousness.

What would you be doing, if you were not in the film industry?

Like I said earlier, I’d be hanging out at an Irani tea cafe by a street corner, pursuing the noble and artistic pursuit of wasting time with my friends.

Three books you’d recommend to someone?

Oh, the list is endless but here is what I can think of, off the top of my head – Annihilation of Caste by Dr B R Ambedkar, The Armenian Champa Tree by Mahaswetha Devi, The Adivasi Will Not Dance by Hansda Sowvendra Shekhar.

Best performances you have ever seen on the screen?

Rahul Ramakrishna is an imaginary bass player, has a short temper (and is working on it) and can make decent sambar.

We wish Rahul Ramakrishna all the very best for his future endeavors and are excited to witness his various talents both on and off the screen.