VoxTalks With Mukul Chadda : An Actor Who Adds Layers And Depth To The Characters He Essays 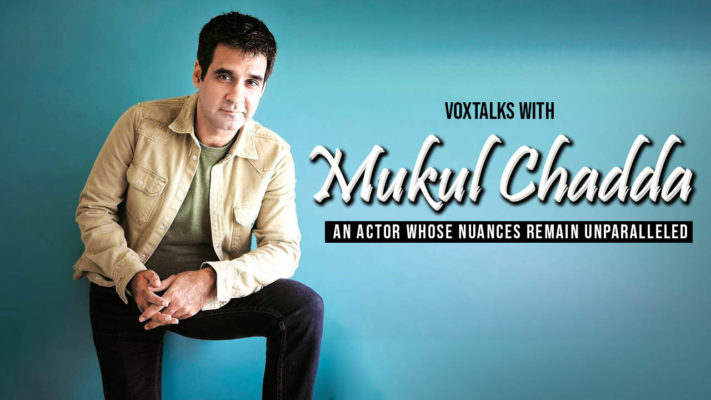 Mukul Chadda: A Very Funny And A Witty Person Whose Acting Is Convincing And Empathetic

There are some actors whose performances are very nuanced. They add these small details to the characters they portray, that you feel you might know these characters in real life. They are so good with their craft that you remember them as one of their characters. One of such Actors, Mukul Chadda, is currently riding high on the success of his latest web series, ‘The Office’. Essaying a challenging role of Jagdeep Chaddha in the show, Mukul has managed to stump the audience with his versatility and a convincing portrayal of a complicated character. We were fortunate enough to talk to Mukul who spoke about how he prepared to play Jagdeep Chaddha’s character, told us how he began his journey and shared some more interesting things about him. Below are the excerpts:

First of all, many congratulations for your latest show, ‘The Office’. Recently the show’s second season has come out. How do you feel after the release of the new season? And how has the response been? Is it something that you expected?

Thank you. The response to Season 2 has, quite honestly, exceeded our expectations. So many people seemed to have really loved the show and its characters. People message us, asking us eagerly for another season, and telling us they are rewatching the show, as they can’t wait to see more. It’s all been overwhelming.

The American version of ‘The Office’ is a huge hit across the globe. Despite its popularity in India, it was decided to adapt it and make it with the Indian context. So, how did it all began? Were you aware of the original series? And how did you land up the role of this ‘funjabi boss’?

I was aware of the original series. However, I hadn’t seen any of the versions – the US or the UK one.

Then in Dec 2017, Kavish Sinha reached out to me and said ‘The Office’ is being remade in India, and that he wanted to test me for the lead part. He told me to watch Season 2 of the US version for reference if I hadn’t seen it already. So I began watching that, which was very helpful in understanding the character of the boss, and also the humour and style of the show.

I had 3 rounds of auditions with Kavish, which stretched over a month. I must’ve done something right, as one fine day, I got a call to say I’d landed the part!

Following up on the previous question, one of the American version’s iconic characters, Michael Scott, is a household name for his uniqueness. And it is brilliantly portrayed, rather elevated by the talented Steve Carell. So when you got to know that you will be essaying this character, was there any additional pressure? And how did you prepare for this character? Could you take us through the process you follow to prepare for a role?

I did feel the pressure to play the character right. It’s a very difficult role, there’s a fine balancing act between playing an over-the-top character convincingly, and overdoing it. It’s also the central character in the show, and so much of the show’s success would hinge on getting this portrayal right. So yes, there was that pressure. But I didn’t feel any additional pressure because Steve Carell had essayed this role in the US version. I didn’t feel the pressure of comparison; frankly, it’s an honour to be compared to him.

Preparation for the role of Jagdeep Chaddha was along several aspects. One, I had to understand the basic persona of this character, and the things that would make him do and say what he does, convincingly. What struck me about Steve Carell’s performance was that he was absolutely convincing in all the nonsense he said. Then there was work to be done on creating the localized character of Jagdeep Chaddha and rooting him in the milieu that the writers had placed him in – a successful paper salesman and proud branch manager in Faridabad.

And putting all that together, I had fun coming up with eccentricities for Jagdeep, his way of walking, talking, mannerisms, and other traits that went into making this crazy guy.

‘The Office’ is made in a mockumentary style of film making, which is not that regular, especially in India. So how challenging was it to shoot the series. And since there are quite some characters involved in ‘The Office’ and hence an ensemble cast, how was it like on the sets of ‘The Office’?

The mockumentary style was definitely new in India, not just for the audience, but even for us while filming it. Initially, I found it hard to look into the camera while doing a scene, because as actors we are so used to ‘not’ looking into the camera. And here, you had to break your natural instinct and keep acknowledging the camera.

But that only happened initially. I found it easy to adapt to, and then, it was fun to play with the camera. Plus, we had a great equation with both the camerawomen, Dhawalika Singh, and Kavya Sharma. They would move around and respond to things we would do in a scene, and likewise, we would try to respond to them as well. It was a great way to work. In fact, I missed that style of shooting on the next project I did!

Let’s go back a bit in time. What plans did you have for your career when you were not into acting professionally? And what triggered you to choose this path?

Oh, I was a research analyst at an investment bank for quite some time, before I chose to return to India and try something else. Even then, I wasn’t clear that I wanted to be a professional actor – that seemed a leap too far, from where I had come from. But I had always enjoyed acting, and did theatre right through school, college, grad school, and even while working at a bank in New York. I’d even taken part-time acting classes at Lee Strasberg Theatre Institute while working – the interest was clearly there.

So when I returned to India, unclear of what to do next, I decided to take a sabbatical – write & do theatre – until I figured out the next steps. And then I guess I was enjoying my time in theatre, so I kept finding ways to extend my ‘sabbatical’ until it somehow morphed into a career at some point.

You have done many short films, Ads, feature films and now you are doing web series. How do you see all these different platforms? And how different is the work process, in all these platforms?

The platform of delivery of the product makes little difference to the filming of it. It’s all fairly similar. The difference often is in the time you get to do a scene (from TV serials at one extreme to ads at the other), and the time you have to tell your story to the audience (again from ads to web series on a continuum). The latter impacts the script and the performance a little, yes.

I think there was a period where I kept extending my acting sabbatical, without fully committing to it as a career. It was a period of self-doubt and hesitation for me, and I feel it would’ve been better and more productive to have fully plunged in – mentally, more than anything else.

We are in an age where people often express their opinions freely, thanks to various Social Media platforms. And prior to the release of the first season of ‘The Office’, there were few negative comments going around in regards to the show. How do you see it? And how do you handle criticism, if there is any? And does it bother you?

Good question 🙂 I haven’t been that active on social media earlier, so this was new for me. It’s hard not to get affected by everything one reads, even though you know you can’t take feedback on social media too seriously.

To be honest, the negativity before the show released didn’t bother me at all, because none of those people had watched the show and therefore it was in no way a comment on what we had done. It was more about people not wanting the US show to be remade at all – even though the US version was itself a remake!

However, once the show released and people watched it, naturally there was an eagerness to know what people thought of the show. And although there was some lingering negativity about the show on social media for a few days post-release (which also slowly turned positive), fortunately, a lot of people whose opinion I respect called to tell me they loved the show, and my performance. And frankly, that’s what matters more to me.

But to your specific question about criticism – had I received negative feedback from people whose opinion I regard, it would hurt. And it should.

Talking about the future, how many more seasons of ‘The Office’ can we expect? And going forward, what all different projects will we be able to see Mukul Chadda in? Any surprises for your admirers, maybe?

Well, I’d hope we could make all 9 seasons!

The next thing you’d see me in is a cameo in Season 2 of ‘Broken but Beautiful’. It’s another quirky character, but very different from Jagdeep Chaddha. And then there’s a film tentatively titled Fairy Folk that might release next year – it was extremely experimental and fun in the way it was shot.

And I’m hoping there’ll be more and very varied roles that I’ll get to play, across all genres!

Films: The Dark Knight, Shawshank Redemption, Back to the Future, The Empire Strikes Back, Lion King.

2. Which are the three filmmakers you would want to work with?

Raj & DK, Sujoy Ghosh, Neeraj Ghaywan, and many many more!

3. What are the three things which no one/ not many know about Mukul Chadda?

I used to play poker semi-professionally at one time, I talk to myself a lot, & I would love to get back to writing.

4. What is the first thing Jagdeep Chaddha would say when he meets Michael Scott?

The innocence and playfulness of Jagdeep Chaddha! Which is why it was so freeing and fun to play him.

Thus, Mukul Chadda very candidly shares his experiences and briefly takes us through his life. Do check out ‘The Office’ if you still haven’t. We wish Mukul all the very best for his future endeavors and hope to see him in more and more interesting and unique roles. Cheers!