Posted on October 2, 2019 by Siddharth Naidu 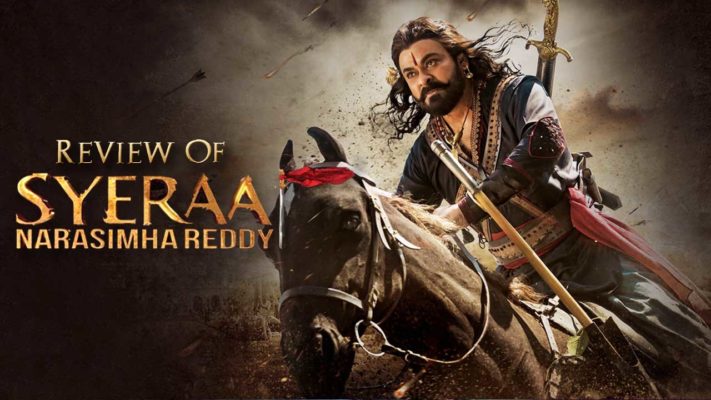 First thing off the bat. If you are a huge fan of MegaStar Chiranjeevi, this is a film made specifically to your tastes. Do make sure to catch it in the nearest cinema hall. There are no two things about it. However, if you are just a solid admirer of his work over the past three decades, then perhaps there are a few things you need to keep in mind before walking into ‘Sye Raa Narasimha Reddy’. The movie, which has been touted as one the costliest films to be made in South India, tells the story of the titular character, who is a Guardian & Administrative Patron of Uyyalawada and his armed protest against British Rule in the 18th century. This story of a forgotten hero, (which has never been explored previously), makes it it’s innate responsibility to squeeze every patriotic act and rebellious exposition to a proportion beyond imagination. In doing so, the story feels haphazard and disjointed despite best effort of making it coherent. Thus, if you are someone who is scrutinizing the movie for its logical screenplay points, then you might find it hard to be rewarded.

Having said that, the movie purposefully runs as a memorabilia mechanism for MegaStar Chiranjeevi. The camera wildly circles around him, soaking in the seasoned actor’s glorious personality coupled together with production sets and expertly crafted costumes. The film makes it a point to have Chiranjeevi fill the frame in every single scene, sometimes rather ominously to the point of blurring out any and all characters around him. Right from the moment go, Uyyalawada and adjoining kingdoms, join together to exchange pleasantries in gold plated vessels, and exchange information which is repeated over and over again. Director Surender Reddy and Writers Paruchuri Brothers, make it a point to make every scene overtly cohesive (even to a fifth grader) so much so that, they forget that they need to also stitch them together in a palatable fashion.

A Singular Driving Force In A Path Of Challenges…

Despite this, Chiranjeevi is the singular force which resonates across the scenes, fighting his way through, both literally and figuratively, all the hurdles placed before him. Producer Ram Charan leaves no stone unturned to gloriously exemplify his father’s comeback to movies after a sabbatical of three years. He pours money into bringing Actors of high repute from neighbouring Film Industries to lend solidarity to the story and Sye Raa Narasimha Reddy in his patriotic cause. In that context, Amitabh Bachchan (Guru Gosayi Venkanna), ‘Kicha’ Sudeep (Avuku Raju), Ravi Kishen (Basi Reddy), Jagapathi Babu (Veera Reddy), Mukesh Rishi (Papa Khan) and of course, Vijay Sethupathi (Raja Pandi), all lend endearing inputs to the overall story. However, they are entirely monochromatic as far as their utilization goes. Then there is Lady Superstar Nayanthara (Siddhamma), who is almost always drenched in gold, looking as if she stepped right out of a Sanjay Leela Bhansali movie, and Tamannaah (Lakshmi) who serves as a floating afterthought in the movie. I’ve seen curtain clothes having more texture and meaning than these characters. But they are there, because it is a fabulous marketing tool, and because Ram Charan can afford the paychecks.

Technically speaking, the movie never fails in its grandeur. The production designs, costumes and styling look brilliantly intricate. The cinematography by Rathnavelu painstakingly captures the colossal number of extras in semantic choreographies across vivid landscapes of Uyyalawada. The sheer crispness of the sets and a keen eye to detail when it comes to the color coordination, tonal appreciation and highlighting, is worth a shout of praise. On a side note, Tamannaah looks ethereally beautiful while executing her role with significant grace and poise which if you are a fan of hers, is a reward in itself.

The Story For The Ages & Of The Ages…

While doing the promotions, in an interview Chiranjeevi had spoken about how this script, by Paruchuri Brothers had been sent to him for consideration, Twelve years back. Well, I can gladly say that script looks exactly that. Twelve years back, people were using Nokia 1100 with BSNL SIM in them, Cyber Towers was a tourist attraction apart from Tank Bund, Hero Honda Splendor was the best bike to roam around the city, and India was a developing country. Perhaps in that time, this script, for a movie goer of a single screen theatre who would fight with hordes of people to get a Balcony ticket and buy popcorn out of stretchy polythene bags, would have been a great script. But sadly, we are in 2019. And twelve years is a long time for a script this wafer thin. With the subtlety of a sledgehammer, Surender Reddy throbs your eardrums with unnecessary elevation shots and uncomfortably high number of drone shots. It’s as if he was asked to just try out anything and everything and see what worked.

To describe the story of Sye Raa Narasimha Reddy, one could say that it is a cramped up mixture of fleeting thoughts (mind you, not ideas) percolating on the rim of the writer’s brain. What works thankfully for the movie, is the magnetic charm that had established Chiranjeevi from a successful actor to the pedestal of MegaStar back in the 90’s. He carries the film forward almost single handedly, despite its shortcomings, doing some insane swashbuckling fight sequences along the way.

The Music Is A Let Down…

What doesn’t work however, is the out of sync, fish out of water music of (never thought I’d say this) Amit Trivedi. The goosebumps inducing songs which we are so used to now, courtesy of MM Keeravani (Composer of ‘Bahubali Duology’) are just not Amit Trivedi’s forte. The songs seem lazily composed and uninventive in their instrumentation. The same or worse goes for Julius Packiam’s BGM for the movie. For the most part of the movie, the BGM made the grave mistake of overlapping with the dialogue which was hilarious and pitiful at the same time.

All in all, the movie, Sye Raa Narasimha Reddy, is a MegaStar memorabilia which works brilliantly if you know the competence and extraordinary caliber of Chiranjeevi and what makes him one of the most revered film personalities in India. Go just to enjoy the man. The movie is just a means to the end!