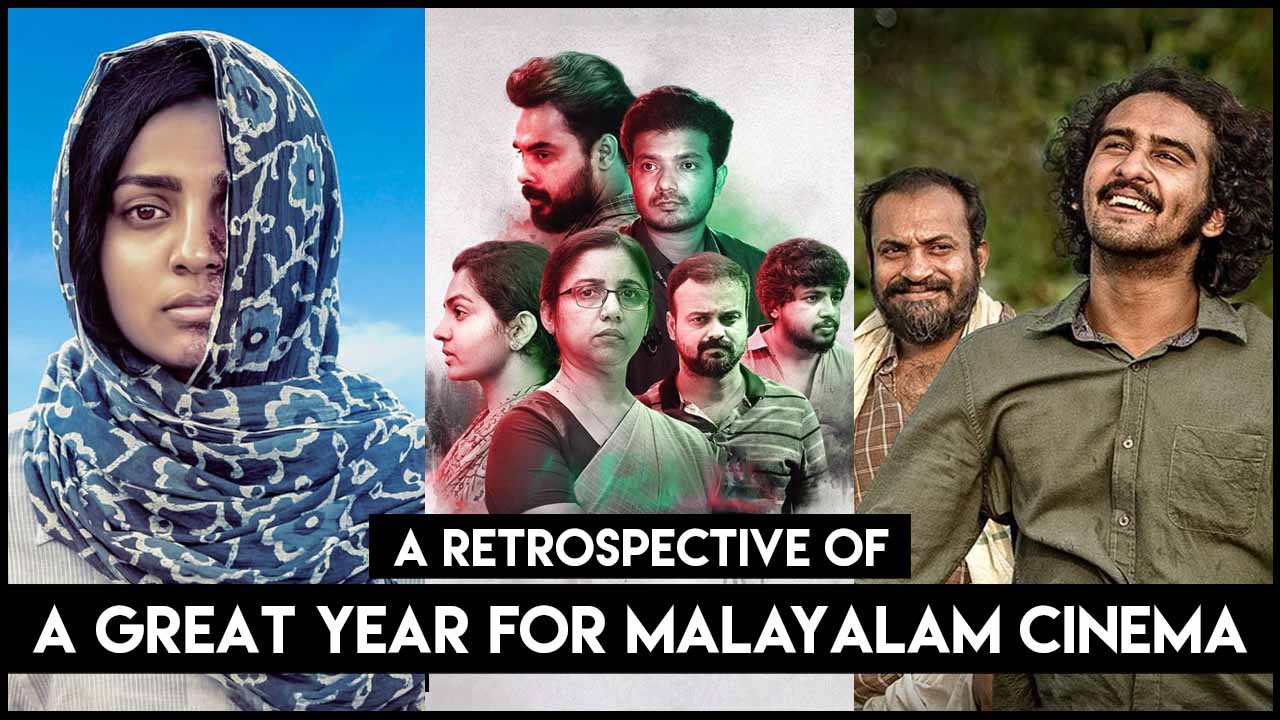 A Monumental Year For Malayalam Cinema

India is a unique country filled with people from vastly different cultures somehow living together harmoniously and our art reflects this beautiful reality. It differs from state to state not only in terms of language but also taste and sensibilities. But there is one thing that is common about every citizen of this country; we love cinema. So we watch movies from all regions of the country to appreciate our different cultures. This year is undoubtedly the year of the Malayalam cinema. They have had some of the best films not only of this year but I would say these films could compete for the best of the decade. So here is a list of films that you need to check out if you haven’t already:

Aashiq Abu’s Virus is an investigative medical thriller that is set in the backdrop of the 2018 Nipah virus outbreak in Kerala. The plot is set in Kozhikode and follows the various stages of the epidemic from identification to its total eradication. This film is a masterclass in giving exposition in the most organic way possible. As the film lays out the arduous process that it took to eradicate the virus in painstaking detail, we learn about the various strangers who had to come together to save their community. While there are very emotional stories to be told here, the film never becomes exploitative or melodramatic with its tragic parts. The film excels in all aspects from the precise cinematography by Rajeev Ravi to the minimal but hypnotic score by Sushin Shyam to the amazing performances by the huge ensemble cast with too many big names to list out.

The tone of Kumbalangi nights is not as serious as Virus, but it too deals with equally important and relevant issues plaguing our society. This is a languid introspective mood piece about the various forms of masculinity ranging from sensitive to toxic. This film is really easy on your eyes because each frame looks better than the last. The film is filled with truly empathetic performances that stay grounded and never seem showy. The first-time director Madhu C Narayan carefully takes you through a roller coaster of emotions just to reach that absolute stunner of an ending. You cannot miss this deceptively deep masterpiece.

What can I even say about this film that hasn’t already been said? The film tells the story of a village in which a raging bull runs amok causing havoc and the various methods the villagers have to use to stop it. With this extremely simple premise, the director Lijo Jose Pellissery creates a film that takes you on a frenzied non-stop thrill ride. While doing this, he also subtextually is showing us the true nature of man by slowly peeling off the layers of the façade that society puts on them. The true heroes of the film are really the sound designer and the cinematographer. They really put you in between the men and the bull and make you feel exhausted by the end of this nightmarish ride. It is a primal and urgent film about man vs wild, in a world where we cannot differentiate between the two anymore.

Uyare is also a film about toxic masculinity. This is a really big recurring theme this year, but this time the story is told from a female perspective. The film tells the story of Pallavi who aspires to be a pilot. She is in a long-term relationship with an extremely abusive man, but she does not realize it until its too late. We see her dreams get shattered irreparably, right in front of her eyes and then witness her journey of self-discovery as she tries to rebuild her life. The film needs to be commended for telling this extremely sad and melodramatic story with a lot of dignity in a manner that seems uplifting.  But the real selling point of the film is the extremely empathetic performance by Parvathy Thiruvothu.

Ishq is a very low key but poignant film about moral policing in India. The film tells the story of a couple, Sachi and Vasu, who go out on a drive to for a romantic night out. As they stop at a seemingly abandoned parking lot, they are accosted by two extremely creepy men who claim that they are cops. The structure of the film is interesting in that, the majority of the runtime of the film happens in two extremely long scenes stitched together with the larger narrative. The film excels at putting you in an extremely uncomfortable claustrophobic situation and holds you there for a long time. The film by the time it reaches its climax puts you in a moral conundrum that will leave you thinking for a long time after you have finished watching it. This is the second film after Kumbalangi Nights that Shane Nigam gives an outstanding performance in.

And the Oskar Goes To..

Now, this is a film that every filmmaker/aspirational filmmaker needs to watch. This is a semi-autobiographical film about the making and marketing of his first film. The film tells this sweet yet haunting story about the importance of cinema and what it stands for. In the process of telling us about his own story, the filmmaker shows us the various people and the ways his film touched them. The film is full of profoundly touching moments of realization and nostalgia presented in a way that I have never seen before. It has a certain amount of optimism that is almost infectious. Please do check this film out if you are at a point in your life where you are questioning your dreams and feel like it doesn’t mean anything. This film will give you hope.

This is a more light-hearted film compared to all the other films on this list. It is a coming of age story that heavily relies on nostalgia, which is not a bad thing when executed well. The film excels in making the proceedings of this high school story as realistic as possible but still keeps the mood upbeat rather than cheesy and sappy. This is the kind of crowd-pleaser that works at multiple levels, hence this spot on the list.

Unda is a black comedy film based on a true incident that took place in 2014.  The film dramatizes the events that occurred when a unit of policemen from Kerala reached the Naxalite prone areas in North India for election duty and the various cultural and bureaucratic issues they had to deal with. The filmmakers cleverly deal with multiple hard-hitting themes like human rights violations, moral crisis, ethnic discrimination and government’s indifference to its own people in a way that is never preachy.  The film also has a brilliant ensemble cast led by the legendary Mammootty who gives a very understated but memorable performance.

Last but definitely not least, the highest-grossing Malayalam film of the year. This is for the mass masala fans out there. The film is full of swag and style, with a huge dose heroism dropped in there. The film works in multiple levels from the thrilling action sequences to the amazing score to the formulaic but very entertaining script and finally the immeasurable swag of the uber-cool stalwart of the Malayalam industry, Mohan Lal. What else do you want? Go watch this film.