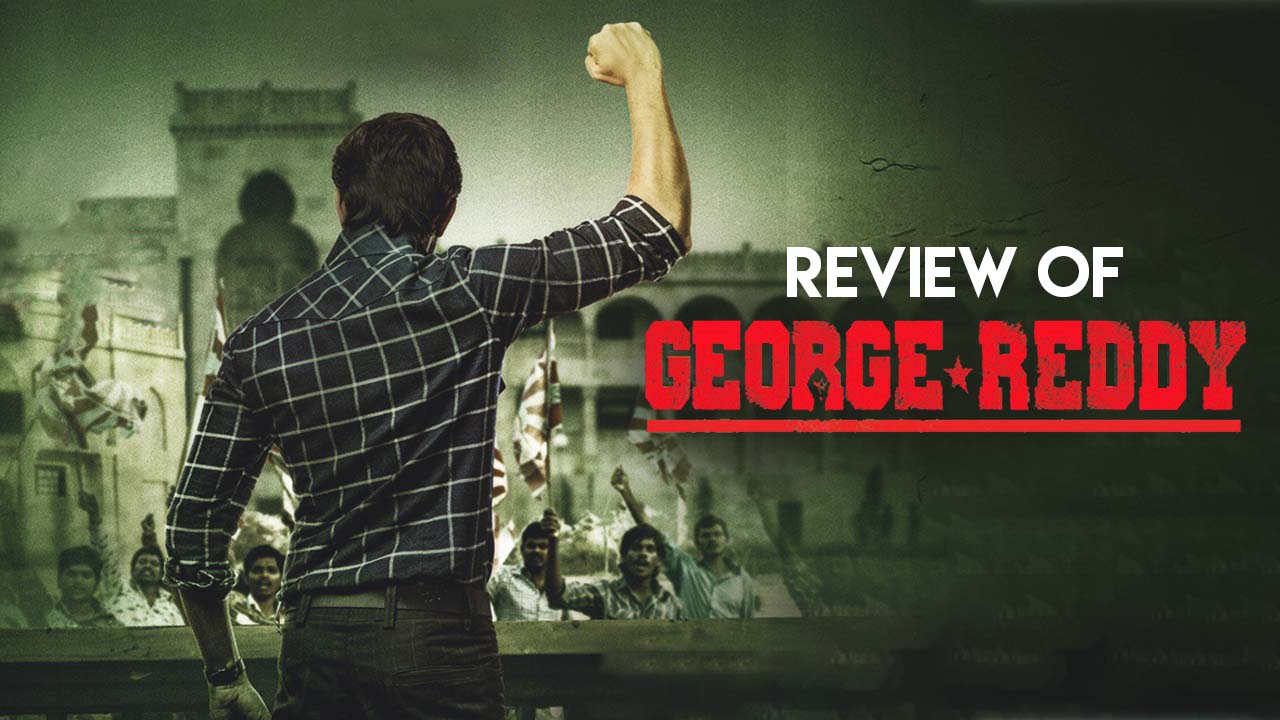 The Unspoken Tale Of George Reddy:

As a speck of universal irony, one could say that a film on the martyred student union leader George Reddy, couldn’t have come at a better time, now when the nation riles under the agitations taken up in JNU against fee hike. The issues at play over ages across different universities in India seem to have a common thread. A need for equal measure, means and representation. And this wrenching need for equality and say, at times in history has spurted out hot blooded revolutionaries who set out to change the status quo of establishment. George Reddy is one such revolutionary who set out to become a symbol for progressive change and against societal disparity. The movie in question, is about the prolific life and times of this oft forgotten revolutionary who remains immortal for his simple yet powerful slogan ‘Jeena hai toh marna seekho, kadam kadam pe ladna seekho’.

George Reddy, the movie helmed by debutant Jeevan Reddy, pans out through the active years of George Reddy (1967 to 1972) as we see him progress from being a new admit to Osmania University to becoming a singular force to reckon within the same campus. The titular role is played by Sandeep Madhav, who was last seen in RGV’s Vangaveeti. The movie with measured precision builds a structure of simmering anger and opposition to already established union bodies headed by Satya (Satyadev Kancharna) who is, as we are introduced, at loggerheads with the prime opposition headed by Kaushik (Chaitanya Krishna). As George Reddy arrives at the campus, amidst caste egos and class divides running amok, he brings with him communist ideals which tend to shape the future of Osmania University. A Che-Guevara figure to the local downtrodden students, George Reddy quickly goes up the ranks and becomes an unsaid political power center, not just for the university but also starts to breathe down state legislation’s as well. On a side note, there are some hard-handed references to the political makeup existing at the time, with a subtle nods to the constitutional philosophies of ABVP (Akhila Bharat Vidyarthi Parishad formulated by the then resurgent BJP) and SFI (Student Federation Of India supported in essence by All India Congress). The color palettes are used to define these two student-political outfits is at most occurrences cheeky. Look out for a scene between Kaushik who offers a ‘hand’ shake to which Lakshman (Lakshman Meesala) retorts with ‘Ram’ greeting. Smart satire that.

Jeevan Reddy chooses to use the detached narrative approach to tell his story through a documentary filmmaker who arrives at Hyderabad to dig out the story of the student union leader. This allows him to merely observe the proceedings with unnecessarily politicizing the occurrences. Through a narrative span of three to five years, Jeevan Reddy establishes the various atrocities impending on the local students and talks about the ideals of communism and spirit of fight back. As if a meta-narrative technique, the makers want to introduce George Reddy and his contribution to the societal upgradation to the ‘Netflix and Chill’ populace existing now, and the narrator becomes a vocal piece of such community.

The Cast Which Slips Smoothly Into The Story…

The major takeaway from the movie remains its use of well-known theatre actors to portray essential roles in and around George Reddy, each representing a unique perspective towards a common issue of differentiation. Sandeep Madhav maintains a calculated measure of composure which helps in portraying George Reddy as a man on a larger mission. His George Reddy is not just a proverbial fire-spitting revolutionary but someone who maintains a distant stance in the shadows of other’s achievements. With eerie precision he captures the likeness of George Reddy in real life, which is equal parts commendable and disturbing. One other assured role in the film is showcased by Muskaan Khubchandani, as Maya, George’s compatriot through the movie. Muskaan brings a sense of ‘familiarity in newness’ as she acts with a natural flair and impeccable timing. Watch out for her in one of the sequential songs, which she single-handedly makes hyper-enjoyable, using her eyes to communicate most of her intentions. One gets an inkling that she would shine brilliantly in more complexly written roles as well.

Abhay Bethiganti as the hot-headed motor mouthed accomplice to George Reddy, Rajanna, unleashes his dormant talent to glorious effect. His over the top antics and spin-turn anger plays the perfect yin to George Reddy’s yang, making the character essential and memorable. Pawon Ramesh as George Reddy’s hostel-mate becomes a point of moral pathos as the story progresses, and the actor delivers the conflicting thought process of the character with deep seated smartness about it. And one can’t get enough of Laksham Meesala, as the conniving theatrically blabbering nay-sayer to George’s prime nemesis. Years of theatrical experience and ozzing screen presence comes into play for Laksham who sets the screen of fire whenever he appears with a distinct dialect and mythical similes.

In a refreshing role as Maya’s snappy friend (Sreedevi) who later on takes up the mantle of movement, Mahati Bhikshu brings her practiced nuances to full effect here. We who are blessed to have an insight into the internal workings of Telugu Film Industry have always vouched that Mahati is a bundle of talent, who needs to find her footing with author backed roles. And something orbital happens here, where she sinks her teeth into as much is asked of her.

The movie belongs to the technical team as much as it does to the actors. With inventively choreographed fight sequences, George Reddy makes violence enjoyable and yet meaningful within the movie. Harshavardhan Rameshwar (of Arjun Reddy fame) delivers a rousing soundtrack theme to George Reddy, precisely grasping the essence of age-old revolution and mixing it with deep stringed string acoustics to give out a sense of freshness. A special shout out to the cinematographer, Sudhakar Reddy, who uses sprawling shots and dense framings to capture the time period set in the movie beautifully. He captures the laid back life of hostel students with as much care as he does the drop-splitting ultra slow fight sequences speckled through the movie.  On the technical front, George Reddy manages to push multiple envelopes across the table, and gladly produces a handful of cool-looking compositions along the way.

All in all, George Reddy is a genre film which relies heavily on its titular protagonist to tell a story which is timelessly relevant. One would better enjoy the film when one can attain an understanding of the life and times of George Reddy the student activist in reality, as multiple references might go unnoticed to the uninitiated. Thus, George Reddy is a brave attempt to tell an important story, and for major parts it remains successful.