Posh Poris Episode 2 – This Is A Huge Let Down From A Promising Start..! 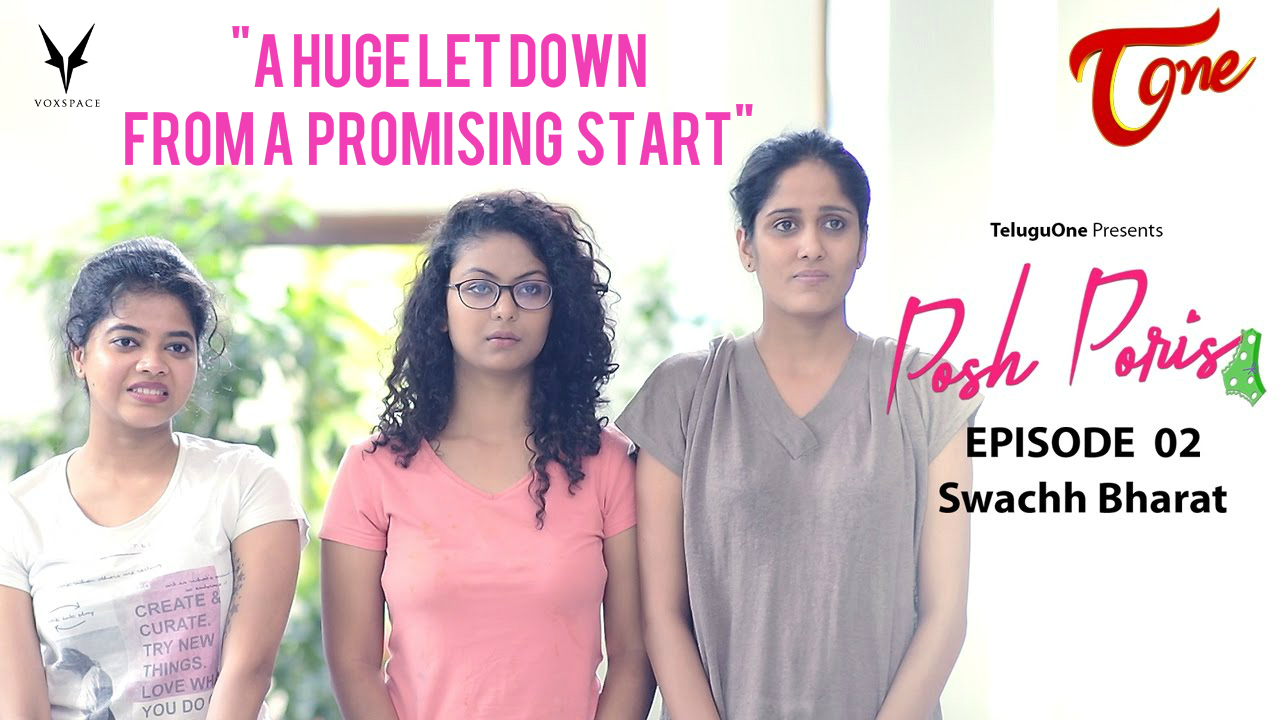 The new web series, “Posh Poris” which garnered much appreciation after it aired its first episode last week is back this week with a fresh episode titled, “Swachch Bharat”. This week the girls take up the herculean task, the nightmare of every “non-maided” apartment in the city – cleaning the apartment. There isn’t anything that hasn’t been said last week. The girls, their characters, the visuals, the acting; all have remained consistent with the previous episode. Two new characters were introduced this week; the landlord and his nephew. Both these characters had the accent of heartland Andhra and their dialogues were well written.

The girls seem much more confident with their characters and their efforts to keep it natural should be applauded. However, there didn’t seem to be any specific direction to the story and it looked like it was being made purely on screenplay. Little continuity issues and realism that should be looked into. I expected that this episode would throw more light on the girls’ jobs’, their backgrounds, their likes, dislikes etc. That would have helped the audience in bonding with the characters. From what I understood, all these girls come from rich families. Then, why don’t they have a maid? If they don’t, then do they clean their apartment only once a month? Sesh uses shampoo instead of “Harpic” to clean the bathroom. Maya keeps hitting something with a broomstick and ends up having cement flakes on the face and hair. Was it the roof? Was it a wall? What was she trying to clean? Which house owner has the permission to walk into a girl’s bedroom and open her closet? And what’s the big deal about using a washing machine? You don’t wash your clothes in the washing machine? You just use it. It does the remaining job pretty much on its own. What’s there to crib?

I can see that the intention of the director is good but we live in the time and age of “Pink”. It’s the 21st century. The age of women empowerment. Lazying around in your PJs, keeping your house dirty, acting irresponsibly is not cool anymore.This is not inspiring or empowering. Even guys have stopped living like that. Whoever said that a girl is independent or empowered when she acts like a sixteen year old rich spoilt boy? Just because the house owner is coming, you throw everything you have on the table into a waste bag and throw it out without even checking if there is anything important, and the important stuff wasn’t even bits of papers, they were two huge important files. If you don’t want the owner to come at that time, Say “No”. It’s OK. If you don’t want owner to go into the balcony because your clothes would be hanging out to dry, Say “No”. Even after all the apparent cleaning, none of the girls look even a bit tired or sweaty. Sesh looked really lively and cute in the previous episode but in this one, she looks and acts like a borderline retard. She should mellow down a little. That accent can get annoying after a while.

Social Media is a powerful platform to influence people. You can show the change that you want in the society. People who have the opportunity to use this platform should be more aware of the things that they show. Why not try showing some real problems that the girls face today? Three loaded girls, roaming around in their huge bungalow, having pseudo problems is not the kind of stories that people want to see. Especially the audience of YouTube and other digital platforms. This kind of life may be a reality but not in the larger middle class picture of India. It is a tragedy that there are very few women directors in our country today. It’s not because of the lack of creativity or passion. It is the lack of opportunity and awareness. But women who do get the opportunity should remember that this is the chance they get to show the world what women go through. To show the world how our fight for equality and respect is being misconstrued. To be our voice and our face. True, you are not being forced to show only that but at least you can make sure that whatever the story is, the woman are shown as people with flesh and blood rather than dumb caricatures or arm candies. Can’t we do that for ourselves? Don’t we owe our society that much?

Let’s break the stereotypes. No, a girl is not cool just because she sits with guys and gurgles down beers. She is cool when she can hold her head up and say No, even if she is the only one to say that. A girl is not carefree just because she keeps her home in a mess. She is carefree when she doesn’t mind cleaning up even if someone else makes a mess. Because, it is her home. A girl is not bold if she brings a guy home for a one-night stand. A girl is bold when she holds on to her love, no matter what. A girl is not independent if she goes to pubs and late night parties. She is independent when she isn’t ashamed of letting her loved ones know where she is. A girl is not only empowered when she has a career, a girl is empowered when she has respect, irrespective of her financial standing. Because, it is her choice. The problem with us is we have our facts right but our examples wrong. And Posh Poris Episode 2 does nothing to better the scenario. There will hopefully come a time in the future when we, women can also get away with making dumb comedies but this is not the time for that. This is the time to save our folk and assure them of their standing in the society.

We have been disgracefully let down. Yet Again. Time To Move On.