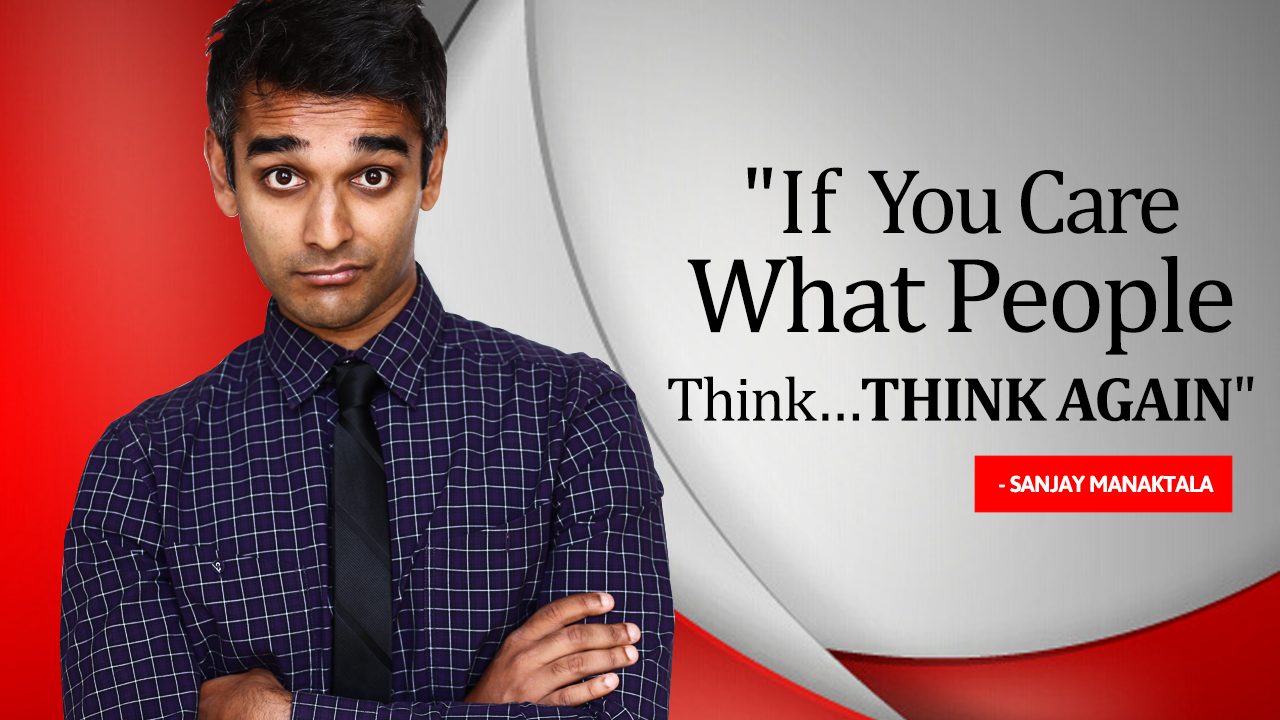 So first thing off the bat. We, as an organization of all things rising and interesting, just love the stand-up comics coming out today. You see, they are everywhere. Be it the chirpy little comic in Bengaluru, the Ramayana presenting Hyderabadi, or the man we will get to know here, an NRI who has redefined the whole culture. Ladies and Gentlemen, presenting Sanjay Manaktala. The man, the techie and all things suave and nice, Sanjay who shifted to India in 2010, a period of shuffling artists and pursuits, came out to bring a discipline to the art form of Comedy. From establishing a comedic talent club to chartering a way of presenting and exhibiting the art, Sanjay Manaktala, has done it all. Needless to say, Sanjay today is counted among the pioneers of structuring stand-up comedy scene in India. Logically so, we approached him to share his thoughts and aspirations with us, and Sanjay the class act that he is was welcome to entertaining us and our weird questions. Excerpts of which below..

So now, first things first. What makes a computer engineer take up Comedy as a pursuit. And what is it that drives most engineers, techies to be precise, step way into something entirely different. I’m fascinated by this phenomenon, what’s your say on this?
I think for many engineers around 25-27 there is a sense of “Is this it?” Also, many of us are not good at engineering; we’re passable. I didn’t hate my IT job – I just discovered comedy and realized I like this a lot more. And in fact, a lot of my comedy comes from my techie background. But in my specific case, I was traveling to two tier cities of the US staying in hotels alone with no friends around, so I started attending comedy nights at local pubs and then once I got a few laughs I was hooked.

Where does the journey of Sanjay, the stand-up comic start? Was it perhaps after you did your first Indian gig in Bangalore or was it way before that? From shifting to Bangalore for good, and practically establishing the stand-up comedy scene in the city, how did the entire thing happen?
First time on stage, March 2009. First time doing it for 5 to 15 times a month, Jan 2010. In May 2010 I moved here, and by the end of the year, I was working with many of the comics you now know today. From there it’s exploded. I normally say I started Jan 2010 give or take a few months.

Most of the times, we the people, somehow have this feeling that ‘Here’s an NRI, who has loads of resources to power his passion.’ Was it something of thought that you faced as well. What were the things that most troubled you as you drew your first steps into the non-existent comedy scene many years back?
The funny thing is, although I grew up in the US I grew up way, way poorer than the average middle class Indian here. We were raised in a 1BHK with my mom and my brother until I was 22 years old. (Although I was off to college at 18). So by the time I was in India I was earning a middle-class salary, but I’m far from rich or “full of resources.” And to be honest, looking back, we didn’t think of anything, we just did it. I feel like that’s the best determinant of success. If you want to open up a restaurant, be a comedian, start photography, build an app, whatever…you can sit, analyze, or whatever – or you can just start doing it and learn as you go. Some of the most crowded restaurants near my house aren’t the best – it’s just built over and over by some rich guy who knows how to get things done. Nothing is rocket science. The things that troubled me when I came here was just people being scared to try comedy until about 2013-2014 there were 20 comedians in the country. Now probably about 200+.

An Applauding Audience makes for successful performances. As we can see from the official website, You’ve been performing all over the world. Therefore, where do you think you achieve a seamless connect quickly with the audience. And why do you think that is. And on a practical front, do you perhaps take care of some steps to connect with the audience.
Bangalore I’m so comfortable with no cause the city knows me. Los Angeles after that. Delhi I’m scared of these days because although they get perfect English, I shy away when a show is majority Hindi. Something I have to work on, but getting there.

From the point of establishing a stand-up comedy platform with Sundeep Rao and Praveen Kumar, called The Polished Buttons ( later Bangalore Comedy Club) to now seeing the scene explode with new talents emerging almost every day, where do you think the evolution took a dramatic turn? What has changed in the audience and how are stand up comedians managing to get their due, now more than ever?
I think when TVF/AIB started hitting big numbers online, people recognized comedy. Plus when Kanan/Biswa’s channel blew up we had a lot of new participants come in. Once stand up clips started making the rounds, everybody started joining and changing their profile pics to one holding a mic lol. But the thing with comedy is it always comes in waves – people see some fame or attention, try it, and then disappear again for a year. We have so many guys in Bangalore and beyond who have done that. But now, an average show will have 50% or more people who have been to a show before, we have a lot of repeat fans, and man, on digital, everyone is making a LOT of money if they’re active. If you have more than 100K organic fans on say YT or FB, you are getting offers daily from brands that could honestly support your whole career. So it’s good to see. Plus corporate shows.

Now for something fun, since we are friends with some super talented comics in Hyderabad and Bangalore, we decided to give them a chance to shoot you a question each ( something that they’ve meant to ask for long). So here we go…,
When Are You Going To Make The Next Video On IT Guy And Why So Long? – (RSM)
I was tired of doing it, but I think I’m going to make IT Girl next, sometime this year. Probably second half.
What is That One Thing You See In Upcoming Comedians That You Wish You Had Perhaps, And What Advice Would You Give Them? (SS)
Energy. I no longer can hangout for 5 hours at an open mic just for 10 minutes, but I’m glad comedians are still doing it. The advice I would give them to stop “just hanging out” and either write, shoot, edit, watch a tutorial on any of those or just always maximize your time because things will fly by so fast in this. And start your comedy rooms.
What Do You Take Before You Step Up The Stage To Shake Off The Jitters, Weed/Vodka/Biryani?? And What Happens When People Don’t Get The Joke? (HR)
I take a piss, to be honest, and a glass of water or diet coke. I don’t like drinking before. And When (not if) people don’t get the joke, I just keep going and hope they ignore it. Most of the times they don’t even realize your joke missed and you’ll just draw attention to it if so. (Like when you have a stain on your shirt, and you think the whole world is looking, but then you realize nobody did).

Let’s talk inspirations. Who do you look up to in the field of comedy and are there certain aspects of your work that you derive from them? In the present crop of comedians, non-diplomatically then, who do you think has it in them to go to a global stage and perform? And where do you say we lack as performers in an international arena?
My favorite acts internationally are Gary Gulman (veteran but recent fame), Dave Chappelle, Aziz Ansari, Louis CK, Bill Burr and Fahim Anwar (one of my favorites that I know personally). For India and International, I think Vir Das is already doing that, Kenny or Kanan have the biggest chance to do it next since they have a very English style, maybe Sundeep if he can get his online numbers up, and I think Danny is making a decent push in that space. The thing about “global” for Indians is that if we’re just performing for Indians overseas, there is not much of a “global” reach, since we’ll still not likely get on Conan or Jimmy Fallon. Where we lack “internationally” is that most content will Desi specific, either with Hindi or about very Indian topics. That’s amazing for an Indian crowd since it’s all new territory, but the only guy I see this year getting non Desi eyeballs is probably Vir with his Netflix special coming up. Oh and Papa CJ.

We hear a lot of skeptical toned rumors when it comes to performing at Corporate Events. Being a senior comic, what’s your take on that. What are the Do’s and Don’ts you’d advise younger comedians to follow while taking up agreements to perform in corporate events?
Don’t curse, don’t do sex jokes. Don’t do more than 30 minutes. Corporate events are not the best, but they pay the bills, so it’s really up to the comics. Best advice is to shadow older comics and watch them for 10-20 shows before taking up one of your own.

Again for some super duper complex questions..,
Scenario 1: What would your opening line be, when performing in front of house full of Trump supporters?
“Hey guys, just remember I was born here…” OR “He guys, remember Trump likes Indians…”
Scenario 2: You are in a drowning ship full of comedians. There’s the last lifeboat available which is occupied by comedians you know. One of them is fighting for a place to save you and one other suggesting they leave without you. Who do you think these people are?
LOL…………. I have no clue, and I’m not going to answer that.
Scenario 3: Who would you date – A comedian who turned Techie or A techie who turned Comedian? Why?
I would never date a comic, it’s not a good idea. Ask any comic. Just too much to deal with. So probably if I had to, the first one.
Scenario 4: What is that one joke that always cracks up people no matter what.
I’ve got like five different jokes about my accent, so my current one is “As you can tell from how I’m speaking I go to Starbucks.” Works every time.

To wrap this up, the typical techie question we hear – Where do you see yourself say ten years from now, more specifically in respect of producing new videos and other media?
Ideally, I’d like to be spending a few months in India, a few in the US, a few in Singapore/Europe, etc… Having a house/family and earning just off of stand-up shows and content.

So that was Sanjay Manaktala, being crisp and fun with all that we fired at him. Isn’t he a great one out there. No frills attached comic, Simple and Clear in his thoughts. We’d be following him as we always do in his works and videos here. Hope you’d do the same on his official Facebook and Website (which has a treasure trove of his all his act). So until next time, Be Happy..Yo..!

5,359 thoughts on “VoxTalks With Sanjay Manaktala – The Global Desi Pioneer Of Stand Up Comedy In India”