[VoxSpace Selects] Movies To Look Forward To : Dread And Breeze Through This Year 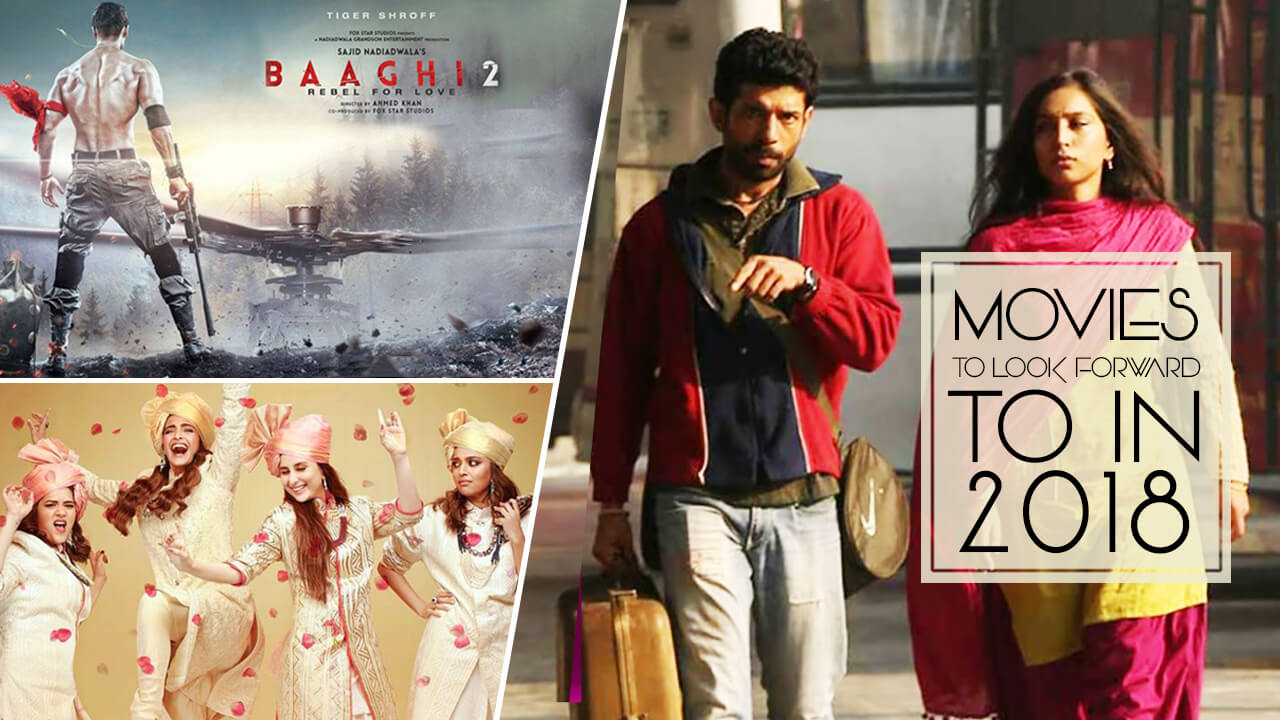 An Exciting Lore Of Movies To Look Forward To

You have heard movie critics say it; you have heard it in the interviews and also, more or less, in every Friday box-office results – 2017 was a nightmare for commercial Indian cinema. The audience simply didn’t come to the theatres except for a few hits here and there. Even, the so-called proverbial “Khans” had a flop each on their hands. For Salman Khan it was ‘Tubelight’, Shah Rukh Khan’s stardom took a beating in ‘When Harry Met Sejal’ and no matter how much Aamir Khan tried to promote Secret Super Star; it simply didn’t work at the box office.

On the other hand, 2017 was golden for content-rich cinema and some of them struck gold. The producers, directors, actors all took note that they couldn’t just put up a show with a flimsy script and expect it to work. With the lessons learned from the past year, the movie industry is set to put up quite an eclectic bunch of films for its audience this year, including the release of the highly controversial Padmavati (sorry now it’s Padmavat) from last year.

We are starting off the year with the much-hyped Anurag Kashyap’s Mukkabaaz. Everyone, who has seen this movie while it was doing its rounds in the international movie circuits, has nothing but praises for it. The buzz around the movie and the good reviews that it has acquired over the weeks will give it a good opening and if Kashyap is in his element, the movie will have a good run in the theatres.

We also have Kaalakaandi releasing in the same time frame as Mukkabaaz. The movie has been directed by Akshat Verma, who wrote Delhi Belly, which had become a hit among urban audiences back in 2011. Saif Ali Khan, who is desperately looking for a hit post-Rangoon and Chef, which failed to impress the audience, may finally manage to dry run with this urban black comedy. However, the movie has not generated any significant pre-release buzz. So, it will have to rely on word of mouth to carry it through.

The next big thing on the list is PadMan starring Akshay Kumar, Sonam Kapoor and Radhika Apte. The content is unique and the entire affair is being helmed by R. Balki of Cheeni Kum and Paa fame. The promos and songs are already generating a lot of buzz. So, it is possibly safe to say that we have a hit on our hands.

Neeraj Pandey is known for making movies that are rich in content and also perform well at the box office. This year the director, who is known for hits such as Special 26 and A Wednesday, is back with Aiyaary that has Sidharth Malhotra, who had a surprise hit on his hands with the Ittefaq, and is being backed by Manoj Bajpayee in this film.

Expect a fast-paced action drama that will keep the audience on tenterhooks. Actress-turned-producer Anushka Sharma has managed to create a separate identity for herself with movies such as NH10 and last year’s Phillauri. Her third outing scheduled for this year is Pari. The actress took to Twitter to share the first look for her film and it has set quite the buzz, with social media speculating what the movie has in store for the audience. Rani Mukherjee will try to make a comeback, yet again, with Hichki, which is being produced by Yash Raj Films. The verdict is out there, if the audience would like to watch it or not, but based on the trailer -- it had its moments and if released with the proper hype the film may manage to have a good run in the theatres.

Parmanu: The Story of Pokhran will have John Abraham doing the heavy lifting and according to the rumours, the makers are pulling all the stops to make sure that they put up a good show.

After Raabta being labelled as one of the worst movies ever made, the sheen of acting on the MS Dhoni biopic has worn off from Sushant Singh Rajput’s illustrious career. He is a man looking for a hit and he may find it in Drive, which is being produced by Dharma Productions and is being directed by Tarun Mansukhani, who had made his debut with Dostana.

Irrfan Khan had an excellent run in 2017 with Hindi Medium and Qarib Qarib Single. The winning streak is expected to continue this year as he will be back with Abhinay Deo’s black comedy, titled Blackmail. It also has Ali Fazal, who is riding high on the success of Fukrey Returns.

Tiger Shroff is known for his action thrillers and Baaghi 2, which is going to be out this year, is expected to topple the success of the previous instalment. The Deol family is going to be back in theatres with Yamla Pagla Deewana: Phir Se, which is already an established franchise and has managed to rake in the profit on its two previous outings and, fingers crossed; the third instalment shouldn’t have a different fate.

Varun Dhawan is not known for making hard-hitting films that are high on content; so, it’s going to be surprising to see what he manages to pull off in Shoojit Sircar’s October. Shoojit is known for movies, such as Piku, Madras Café and Vicky Donor. So, if there is anyone who can extract an enthralling performance from Varun Dhawan, it’s definitely him.

The hype around 2.0 is already so huge, that people are calling it one of the biggest movies of the year and that it’s too big to fail at the box office. It’s true, as it has all the right ingredients to make it a roaring success. No one expects a movie that has Shankar, as the director, and Rajnikanth and Akshay Kumar, as protagonists to fail.

Kangana Ranaut was in the news last year more for the controversies regarding his on-and-off relationship status with Hrithik Roshan than for her movies. Her previous two outings, i.e. Rangoon and Simran, were major flops and if anything can save her career now, it will be Manikarnika: The Queen of Jhansi, in which she plays the titular role.

Alia Bhatt has been making some very smart choices recently and all of them have paid off. So, when she gets back this year with Meghna Gulzar’s Raazi flanked by Vicky Kaushal of Masaan and Raman Raghav 2.0 fame, expect the audience to take note of it.

Kareena Kapoor, Sonam Kapoor, Swara Bhaskar, Shikha Talsania -- they all will come together for Veere Di Wedding and we really don’t know what to expect out of this one as of yet, however; we should keep in mind that it is being produced under Balaji Motion Pictures and Ekta Kapoor is known to make sure bets rather than risky gambles. Harshvardhan Kapoor’s debut in Mirzya was surprisingly lacklustre and many pegged the actor as one, who is yet to learn the ropes of the trade. Despite being directed by Rakeysh Omprakash Mehra and being written by Gulzar, the movie had fallen flat on its face. However, we can hope when Bhavesh Joshi releases this year, Vikramaditya Motwane would manage to turn this star-son’s career around.

We are going to have Salman Khan back, once again, this year with Race 3, which is already a well-established franchise and the third instalment is being directed by Remo D’Souza.

The Movies With Many Anticipations…

The audience will also be looking out for Rajkumar Hirani’s much-awaited biopic on Sanjay Dutt, which may also become the pivot that Ranbir Kapoor needs to get his career back on track.

Arjun Kapoor and Parineeti Chopra are teaming up once again for Sandeep Aur Pinky Faraar and it is going to be directed by Dibakar Banerjee, who has a lot of that indie vibe going on for him. Maybe, expect something different on the screen rather than the same old “boy meets girl” routine.

Movies that are also scheduled to release around the same time are Akshay Kumar’s Gold, Shahid Kapoor’s Batti Gul Meter Chalu and Varun Dhawan and Anushka Sharma’s Sui Dhaaga: Made in India.

Anand L. Rai along with Shah Rukh Khan, Katrina Kaif and Anushka Sharma (the Jab Tak Hai Jaan trio again) will come with Zero, where King Khan plays the role of a dwarf. This movie needs to be a hit; else SRK’s stardom will take a beating and push it so low, from where it will be tough to find solid ground.

The biggest draws at the end of 2018 will be Thugs of Hindostan, starring Amitabh Bachchan, Aamir Khan, Fatima Sana Shaikh, Katrina Kaif, and Super 30, which will have Hrithik Roshan, Bobby Deol, Aditi Rao Hydari and Mohammed Zeeshan Ayyub holding the fort.

The year will end with Ranveer Singh and Rohit Shetty, who are pairing up for Simba. This is going to be the first as-and-in movie for Singh.