[VoxSpace Selects] Filmmaking And The Art Of The Long Take 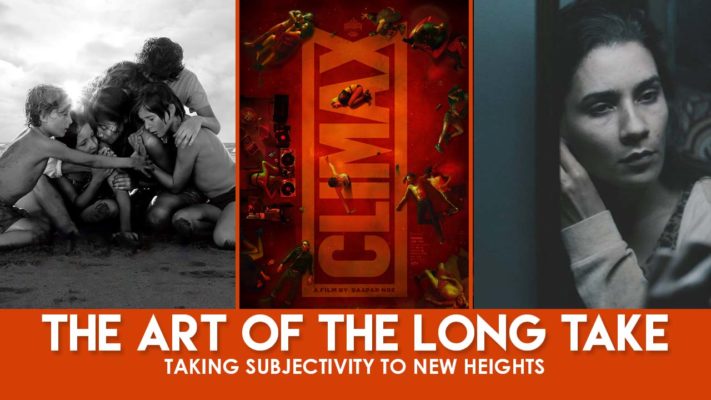 Montage Theory And The Long Take

Eisenstein’s montage theory states that editing together related or seemingly unrelated images or clips can convey complex ideas in a palatable way. This is definitely true if the intention of the film-maker is to only convey an idea. But, what if the filmmaker does not want you to even know that there is an idea being conveyed? What if he or she just wants you to experience the film in a very subjective way? Hence, the long take is born.

A lot of film-makers in history have successfully pulled this in the past, from Orson Welles (Touch of Evil) to Alfred Hitchcock (Rope). But with the rise of special effects and technical wizardry, film-makers have been trying to push the envelope with regards to the ‘long take’. Directors and DOPs like Alejandro Gonzales Iñárritu and Emmanuel Lubezki respectively have perfected this craft.

Out of the scores of films which have used this technique, I would like to talk about three films of 2018 that used it to vastly different effects.

Roma is a semi-autobiographical movie about Alfonso Cuaron’s childhood and his family’s relationship with their maid Cleo. When it comes to long takes, the assumption many a time is to show off how masterfully a shot has been orchestrated, or to leave a question in your mind- “How did they pull that off?” Here Cuaron never does that. He lets the composition of a shot inform the viewers how he felt, at that moment in his life, rather than move the camera in impossible ways, so that you are never taken out of the moment.

One of the best examples is the most talked about the riot scene in the film, where we witness a riot from the perspective of Cleo. The shot is actually very simple, it is just a 360-degree turn of the camera revealing the beginning of the riot and it overflowing into the shop. Cuaron has done something similar in Children of Men, where he puts you in the middle of the riot. But here the camera stays in the shop with her because the point is to make you empathize with her and not to show-off how brilliant the shot is.

Soni is the story of two female police officers in the Delhi police force. Here the director chooses to keep every scene in one long uncut shot. The shot never ends until the scene ends. As the characters feel that they are stuck in the patriarchal bureaucracy of the police system, the director wants you to feel the same.

There are many sequences in the film where you feel suffocated due to the unending nature of the obstacles they are faced with. It never feels like a gimmick because the intent coincides with the way the film wants you to feel.

Finally, the movie that literally broke me last year. Climax is a film about a group of dancers stuck in one place having a very long LSD trip. Gasper Noe is known for his films that have extremely visceral experiences. With this film he outdoes himself. I felt like I was stuck in this enclosed space with these dancers to such a level that it got hard for me to breathe at some points in the film.

The film is structured in a way where we are familiarised with the characters and their conflicts until the mid-point of the film. Then he takes it to this dark place where this unending bad trip starts and it feels like it is never going to end. The almost 40-minute-long take is so traumatic and disturbing to witness but never lets you even blink for a second.

So, what I gathered from these vastly different films are that the technicality of a shot should not precede the emotion of the shot. Each of these films uses the technique to vastly different effects but, there are two things that are common about them.

Firstly, how the uncut nature of the shots brings a kind of subjectivity that is irreplaceable. Secondly, by its nature the long take is a very noticeable thing when used, it needs to be used economically and for a well thought out reason. This technique should not be used because it looks cool, it should be planned from the conceptual level of the script so that it feels organic to the piece.