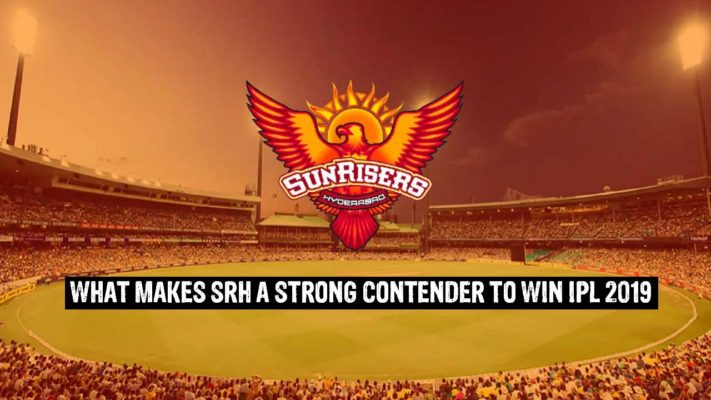 Sunrisers Hyderabad (SRH) has been one of the strongest contenders to feature in the IPL finals over the past three years. They have performed extremely well starting from 2016 to 2018 under the leadership of David Warner and Kane Williamson respectively. The team won the cup in 2016 and were runners up last year in 2018. They have strived to have a very balanced team, which has been their strength over the years. And because of that, they have a good chance to go on and win the cup in the upcoming season of IPL 2019.

But, a lot of you may ask the question- What makes SRH the most balanced team in IPL?

Strengths And Weaknesses And Getting The Basics Right

One thing which SRH’s management has understood is that you need good bowlers to win the matches for you, in the fast-paced version and the shortest format of the sport- T20. You can somehow manage with decent batsmen but bowlers are the ones who will win you matches. They are the ones who can change the match at any given point of time. For example, a bowler can be hit for five sixes in an over but he can always come back and get the batsman out on the sixth ball. So the bowler always has an upper hand.

Hence SRH has invested in building a pool of extraordinary and varied bowlers over the years like Dale Steyn, Mustafizur Rahman, Ashish Nehra, Karn Sharma, Amit Mishra etc. This has always been their priority and it has shown great results for them. They have been part of many low scoring matches and have come out victorious on most of the occasions.

For example, in 2018, SRH put up a low score of 118 in the first innings against Mumbai Indians, which is not a difficult score to chase. But, SRH managed to defend the second lowest total in IPL history and defeated Mumbai Indians by 31 runs, courtesy their bowlers Rashid Khan and Siddarth Kaul. The team has been in similar situations quite sometimes and have shown great commitment to change the course of the match.

It can be said that they have made it their strength and they build their plans accordingly, which is reflected in the team. For the new season, they have both retained as well as bought new bowlers like Bhuvneshwar Kumar, Rashid Khan, Siddarth Kaul, Shakib Al Hasan, Billy Stanlake and Shahbaz Nadeem to name few.

What Works And What Doesn’t

Another smart thing SRH has done is to get some quality all-rounders in the team. An all-rounder is always a major asset in any team because he can contribute with both bat and ball. And SRH has managed to get some effective and match-winning all-rounders in Shakib Al Hasan, Mohammad Nabi, Yusuf Pathan, Deepak Hooda, Vijay Shankar and Abhishek Sharma who covers the variance skill set needed for forming different team combinations. Add to this list, there are players who essentially have a strong primary skill but can contribute with their secondary skill as well like Rashid Khan, Kane Williamson and Bhuvneshwar Kumar.

The only area of concern for SRH has been their batting department, especially the middle order. SRH has struggled to find a good Indian batsman who can fit well in the middle order. That’s the one missing piece they have been trying to find but in vain. They have tried doing so with players like Yuvraj Singh, KL Rahul, Hanuma Vihari, Naman Ojha and Manish Pandey, the latest entrant.

Although Pandey didn’t perform as well as he was required to in the last season, the team is backing him after a series of consistent and match-winning performances in domestic and first-class cricket. SRH’s batting has been anchored and managed by their star player David Warner, and Kane Williamson in the former’s absence last year. This year, with both of them being available, along with some new and retained batsmen like Jonny Bairstow, Wriddhiman Saha and Martin Guptill, the batting department looks quite comfortable.

SRH is considered one of the most balanced team and a strong contender to win the cup as they have identified their strengths and weaknesses. Having good bowlers and all-rounders compensates for the lack of batting stability, hence making their team a well-balanced one.

Another important factor which has mattered for SRH is the captaincy and the individual performance of the captain. David Warner was a consistent performer for the team and was leading from the front. During his captaincy, he always tried to put pressure on the opposition and never shied away from taking bold decisions.

Although, just before IPL 2018 was to commence, it was a huge setback for SRH when their star player and captain, David Warner was banned from cricket after his sandpaper scandal. It didn’t affect the team much as Kane Williamson stepped into Warner’s shoes and filled both the roles of batsman and captain superbly. This helped him personally as well, as he was struggling to adapt as a batsman into the T20 format. And he maintained the tone of the captaincy set by Warner.

Also, the team management of SRH always believes in and backs their players, which in turn helps the players to perform well. In Tom Moody, VVS Laxman and Muttiah Muralitharan the SRH management have some cool heads as the leaders and consultants. They are the ones responsible to maintain the calmness and high spirits of the players in the dressing room, which in turn reflects on the field.

SRH strategizes well in auctions every time, so is the case this year. Not only did they buy players who fit the missing pieces, but they also ensured that they have good back up options like Basil Thampi, Ricky Bhui, Shreevats Goswami, etc, and foreign players like Jonny Bairstow and Martin Guptill.

This is so because some of the foreign players might have to leave the tournament midway owing to their national duties. Also, they used the ‘exchange of players’ option well by letting Shikhar Dhawan go and getting Vijay Shankar, Abhishek Sharma and Shahbaz Nadeem (from the Delhi Capitals team) in return, all who have a different skill set.

An Underdog Tag To A Formidable Force

SRH was always perceived as an underdog because of its lack of star players and being a ‘weak’ team on paper. But this very tag helped them grow as they could easily perform to their fullest and be fearless as they had nothing to lose. This made them a very intimidating and a formidable side which no opposition could afford to take lightly.

One more aspect which has helped the SRH team to be feared is- no matter what the situation is they don’t rule themselves out of the match easily. They keep fighting and won’t allow the opposing team to get away with an easy win.

Take the match between Sunrisers Hyderabad and Delhi Daredevils (DD) (now Delhi Capitals) in 2018 for instance. SRH won the match, which was a last-over thriller courtesy Yusuf Pathan, who helped the team score 28 runs in 12 balls. For a major part of the game, DD was in the driving seat but SRH remained calm and won the match, showing why they are a champion side.

Players To Look Out For

There are quite a few players in the team who can change the whole game alone when they are on song. But there are some players who have the ability to be a match-winner more often than not and consistently perform well. David Warner, Kane Williamson, Rashid Khan and Bhuvneshwar Kumar are definitely the players who have been consistent and are the players who rarely have bad days on the field. Although it will be interesting to see how the team will fit both Warner and Williamson in the playing eleven, with one of them being the captain (mostly Williamson).

Apart from these seasoned performers, another interesting prospect and pick is Abhishek Sharma, who looks like a good asset with his all-round abilities. He can pace the innings well when required and gets done with some quick overs with his slow left arm. Vijay Shankar also has the potential to be a game changer, but he needs to up his game and make the team believe that he can be trusted and be banked upon when needed.

These are some aspects which make SRH an unstoppable force and hence a strong contender to win the cup in IPL 12. I will be rooting for the Orange Army and will be hoping that the team makes it to the finals.