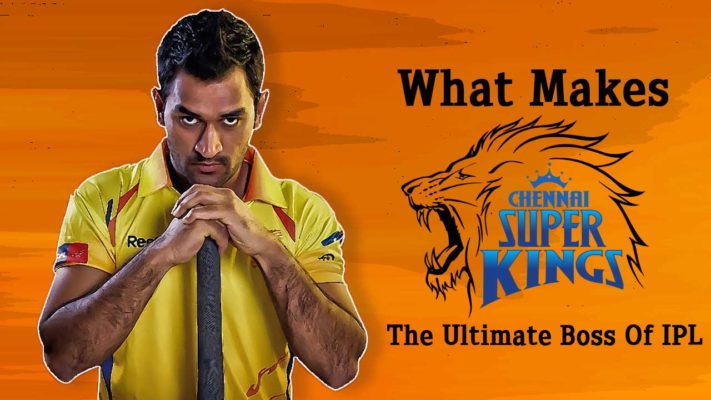 Chennai Super Kings (CSK) is like that guy from school who no matter what always comes first. In every season right from the start, everyone talks about who would be facing CSK in the finals. Such has been their dominance over the years in IPL. They have been a strong side and the fiercest competitor among all the teams. So what makes team CSK the ultimate boss of the IPL?

Strengths And Weaknesses And The Magical Factor

The biggest strength of CSK is that they have formed a strong core of team members, who have performed consistently for the team over the years. They have built the rest of the squad around that core. CSK’s core members include the likes of Mahendra Singh Dhoni (MSD), Suresh Raina, Ravindra Jadeja, Dwayne Bravo, Ravichandran Ashwin (until 2017), Faf Du Plessis and Murali Vijay. These players have been there with the team for a long time, some of them right from the start. This helps create a comfortable atmosphere in the team, which in-turn helps get better and desired results.

Apart from the core players, CSK has always had some incredible batsmen and match-winning all-rounders playing for them over the years; like Matthew Hayden, Stephen Fleming, Michael Hussey, Brendon McCullum, Dwayne Smith, Andrew Flintoff and Albie Morkel to name a few. Batting has always been their strength and even this year with the likes of Shane Watson, Ambati Rayudu and Sam Billings along with the senior batters MSD and Suresh Raina, they have an explosive and strong batting line up. They have a good list of all-rounders like Dwayne Bravo, Mitchell Santner and Kedar Jadhav along with Ravindra Jadeja. All these players combined would fit well in different team combinations, giving CSK an edge.

But the biggest strength of CSK and its magical factor is its captain, the phenomenonal MS Dhoni. One cannot talk about CSK without talking about MSD. MSD has been with and leading the team right from the start. The extraordinary leadership skill that MSD possess has been one of the biggest factors behind CSK being a champion team.

Captain cool MSD has led CSK to seven finals, of which the team won three. His mastery as a finisher, his fearful presence behind the stumps and the vast experience he has acquired over the years have helped him do so. There have been instances where it has been a one-man show from MSD. Not only does he contribute immensely with his own skills, but he also guides other players.

For instance, in a match last year (2018) against Royal Challengers Bangalore (RCB), CSK were in a spot of bother in the ninth over in the second innings with a score of 74-4, while chasing a target of 206. MSD along with Ambati Rayudu put CSK back in the game with some incredible display of power hitting, scoring a quick-fire unbeaten 70 off just 34 balls. MSD was at his aggressive best, smashing the ball everywhere and forming a match-winning century with Rayudu (who scored 82) and lead CSK to win the match with two balls to spare.

The only aspect which has concerned CSK to an extent is the bowling department, especially the death overs. They have always had good spinners like Muttiah Muralitharan and R Ashwin. The current lot consisting of Harbhajan Singh, Jadeja, Imran Tahir and Karn Sharma cover the spin department and manage those middle overs.

But, in spite of that, they have struggled to get some good pacers. In the past, they have had good pacers like Doug Bollinger, Ashish Nehra, Ben Hilfenhaus, Andrew Tye and Kyle Abbott but they weren’t able to utilize their skills effectively and to their full potential. Though this year they have got some skilled fast bowlers like Lungi Ngidi, David Willey, Shardul Thakur and Mohit Sharma in the squad, it will be interesting to see how well they will be able to contribute to the team’s requirement and control the power-hitting during the crucial death overs.

Just before the start of IPL in 2018, team CSK, which was coming back after a two-year suspension, stumped everyone during the mega-auction with their new and out of the box strategy. Most of the players they bought like Ambati Rayudu (32 years old), Kedar Jadhav (33), Murali Vijay (34), Shane Watson (36), Harbhajan Singh (37) and Imran Tahir (39) were on the older side. And because of this move, the team received a lot of criticism from the cricket pundits and fans.

However, the team management discarded the comments regarding the team’s average age. The team’s coach, Stephen Fleming even explained the importance of having experienced players and how his focus was winning the IPL for CSK and not developing young players.

“They’re 35-36, not 55-56. A massive amount has been made of it. I am not here to develop young players, I’m here to try and win the competition for the franchise. And that’s why we value experience because we think that gives us the best chance,” Fleming said in a press conference on Wednesday (April 24), quoted by Cricbuzz explaining why they preferred experience over youth.

And this move by the team management paid off well. CSK performed well throughout the tournament and ended up at the second position in the league stage and then went on to win the finals for the third time against Sunrisers Hyderabad. By having the same squad for the upcoming IPL 2019, they show how firmly they believe in their plans and how strongly they back their players. And this amalgamation of experience along with a set-winning culture in the dressing room and its consistent performance from core players makes CSK the strongest side in IPL.

Star Players And Players To Look Out For

CSK stands out from other teams and is an unstoppable force because of its senior players like Suresh Raina, Ravindra Jadeja, Dwayne Bravo and MSD, who have performed with consistency over the years. Suresh Raina is also the leading run scorer for CSK and until the start of IPL last year (2018) he didn’t even miss a single match for CSK.

Dwayne Bravo has to be their Most Valuable Player (MVP) as he makes a huge impact with his all-round skills. Be it anchoring the innings or finishing it with the bat, bowling those crucial death overs, for which he has been the purple cap holder a few times, or the agility in the field, he always contributes majorly in every game.

MSD always has a big impact on every game in various aspects. Jadeja chips in as well, with his batting and bowling skills, while always delivering with his fielding. The previous year, both Rayudu and Jadhav have shown how lethal they can be and even Sam Billings produced some match-winning performances.

Apart from these seasoned players, they have some interesting prospect in players like Deepak Chahar and Dhruv Shorey. Deepak Chahar has shown glimpses of being a match winner last year with not just his bowling, but also with his batting at times. And in Dhruv Shorey, they have a batsman who has been piling up runs in the domestic circuit and first-class games.

This is my analysis of team CSK and why I feel they are the strongest, the most destructive and lethal team in the IPL. I am looking forward to seeing what plans and strategies other teams will come up with to put a brake on this bullet train. My best wishes to Chennai Super Kings and MSD. Whistle podu!