[VoxSpace Selects] Tharun Bhascker : The Art Of Experimenting Within An Established Structure 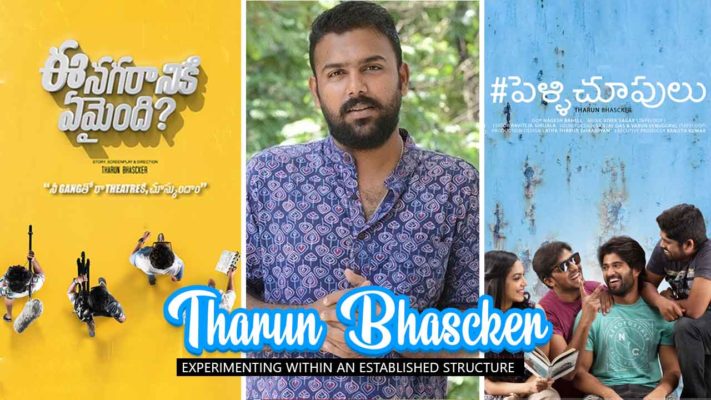 The famous academician Christopher Booker believes that there are only seven basic plot structures in all of the storytelling formats. These frameworks are recycled time and again in fiction, but populated by different settings, characters, and conflicts. So, every story someone wants to tell would fit into one of these categories. The thing that can make a story unique is the small details, the small quirks, the unexpected jolts and unique insights, that can only come from a writer’s personal experience. In recent times, there is one film-maker who is consistently putting out great work in the Telugu Film Industry-- Tharun Bhascker.

With his two short films and the two features, he has built a career for himself that is enviable to any aspirant film-maker at this point. So, I wanted to theorize upon why his films work so well and why is he able to consistently put out great work.

The Experiments Of Tharun Bhascker Within An Established Story Structure

In all his work to date, I see a pattern. He always chooses a very well-established story that people are familiar with. For example, Sainma (Rags to Riches), Pellichoopulu (Rom-Com), Ee Nagraniki Emaindi (Buddy Comedy). This, in my opinion, is not because he is incapable of coming up with some out-of-the-world story. It’s because his aim is for the audience to be in the moment and not really get lost in the plot.

His movies consist of incredible moment stitched together with a structure that is easy to follow. This allows him to put in incredibly minute and personal quirks into every scene in the film. Like the scene in Pellichoopulu where Prasanth talks about ketchup is that scene that stays with most of us, not the break-up which takes place in the third act. Because that moment makes the character a lot more personable and relatable, hence making me root for him no matter what.

Any form of art takes a political stand, irrespective what anyone says because art in itself is political. So, I believe a film-maker needs to be very socially aware and should, in my opinion, have a very progressive outlook towards the world. This does not mean that you should look down or shun away anyone who does not believe the same set of ideas. Tharun Bhascker, in his films, represents this beautiful mix of very progressive ideals while never looking down on anyone.

Take any of the female characters from his films. They have hopes and aspirations, and they work towards them. They are never passive observers to the story, they are active participants. Or the way he deals with the class divide and the need for dreams for any person in Ee Nagaraniki Emaindi. This not only shows his political awareness but also that there is a real voice behind his films, they are not products made solely for entertainment.

While I have been talking mainly about his story and structure, I would also like to touch the technical aspects of his film. While there are a lot of film-makers who excel at making really beautiful looking films, they lack a certain amount of character.  What I feel like they miss are the small imperfections that add to the film in an enormous way.

Mainly I am talking about sound. A lot of our film-makers choose to do all the SFX work in post. The problem is, however good your sound designer is, they won’t really be able to recreate the real thing. That’s the reason I love Tharun Bhascker’s choice to shoot all of his work with sync-sound. Sync-sound captures even the smallest things that an actor/actress says or does, keeping their performance intact and a lot more authentic.

That was my little appraisal of one of my favourite film-makers working right now. Hoping to see a lot more amazing work from you Mr Tharun Bhascker.