The butterfly effect is usually explained by a ridiculous philosophy that a butterfly flapping its wings in Brazil causes a hurricane in Texas. Although this is preposterous in its very premise, there is a lot more to the Butterfly Effect. Let us dig deeper.

Around half a century ago, during the 139th conference of the American Association for the Advancement of Science, Edward Lorenz put forth a question to the science community that became the essence of the Butterfly Effect: “Does the flap of a butterfly’s wings set off a Tornado in Texas?” This tiny question, that seems to have a larger impact on the scientific community, much like the phenomenon itself, has much more to it than the question it begs.

Just a few years after its first proposal, the world embraced its existence and it’s now widely used to emphasize on the significant outcomes that are a dire result of minute occurrences.

Is the Butterfly Effect Real?

What Is The Butterfly Effect

To lay it thick, the Butterfly Effect put forth this provocative question which was to illustrate the idea that complex dynamic systems, which exhibited unpredictable behaviour, with extremely small changes or variances in the initial conditions could have a significant and extremely diverse effect on the entire system’s behaviour. This rather shallow question by Lorenz became a large branch of mathematics and became the basis for what came to be known as the Chaos Theory, which has found many applications ever since its inception. 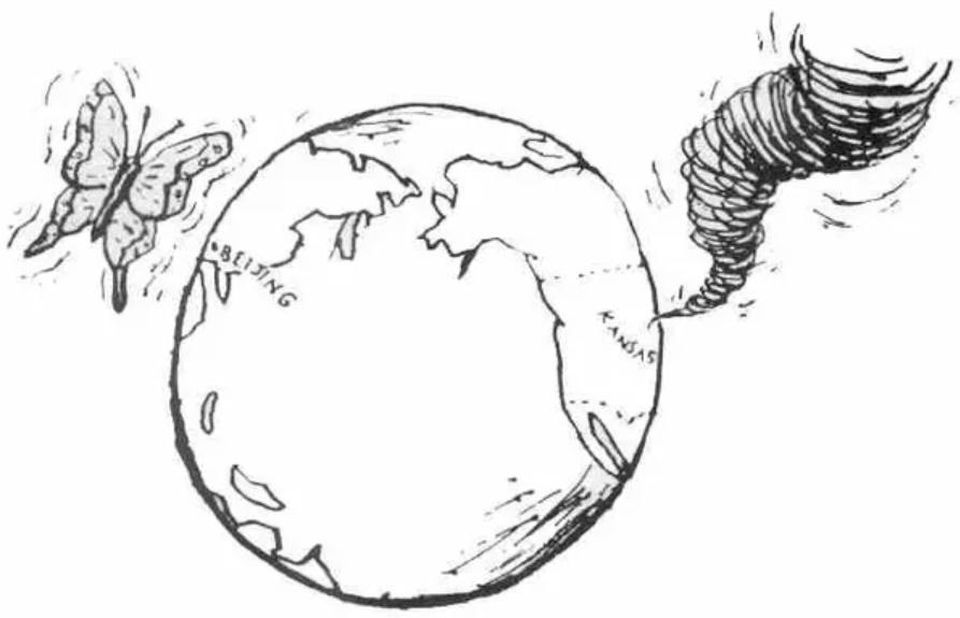 To put the Butterfly Effect rather simply, let us take a small example, one that illustrates it rather perfectly. Let us imagine a Tilt-a-whirl ride at a carnival. It is a circular system that has tiny shell-like cars attached at its boundary, each rotating in a small circle in which people can sit in. This ride has fixed rules. Each time, the platform rotates the same manner and the carts can rotate around specific points. The rotation of a seat with one person inside happens in a certain way. Now, if another person was to sit in it, the cart would be heavier and the ride would be completely different. Imagine there are different variations to each seat, with different sets of people occupying each of the tiny cars. These little variations affect the entire Tilt-a-whirl.

This is the Butterfly Effect.

The Birth Of The Chaos Theory

The Butterfly Effect has a scientific name to it: “Sensitive dependence on initial conditions”. When Edward Lorenz discovered it, he was using an old computer to calculate weather patterns. Initially, he ran a simulation with data up to six decimal places. The second time, he removed the tiny fractions and used only three decimal places. When he ran the simulation again, he was caught off guard with the results, which bore little resemblance to the first simulation, which was when the “crap hit the counter”.

At the time, Mathematicians thought that if they changed a little at the start, there would be a little change in the end, which seemed quite logical. But with this discovery, their previous assumptions proved to be quite futile. These systems now showed that with minor changes in the set of initial conditions, the result at the end would have paramount changes. This baffled scientists, but soon paved the way to a new branch of science called the Chaos Theory.

Chaos Theory deals with complex systems whose behaviour is greatly affected by tiny changes in the initial conditions of the system. It seems to be a very chaotic phenomenon, but it actually follows a set of laws, as almost all bodies in the universe do.

Practical Uses Of The Chaos Theory

This turned out to be quite scary for scientists, as it took scientists from understanding a large chunk of the universe using classical laws to putting us who-knows-where But, like everything else, the universe acts with a set of rules and scientists have been studying these rules for nigh over a few centuries.

Take nature for example, which is quite a large subsystem in itself. We see that the shape of every corn kernel comes with a unique shape, or the design patterns on the shell of a turtle are very similar to all of its ancestors. These little shapes that provide definition to an organism are known as Fractals. These fractals prove that in these dynamic, infinitely complex systems of apparent chaos lies order following a set of rules.

Chaos Theory is the bridge between the science of the world tilting toward chaos with the advent of the butterfly effect and the platform where we see that there exists order in chaos. It’s quite ironic that Chaos Theory moves us from chaos to order.

Chaos Theory has found itself a ton of practical applications. From understanding the way greenhouse gases affect the atmosphere, to how the brain reacts to certain emotions, to the way humans behave in a social gathering, and much more. A study conducted using Chaos Theory followed ninety-five couples who were to get divorced. The results proved staggering as they were right eighty-seven per cent of the time. Calculating the daily weather or the global climate using the math involved in Chaos Theory is proving to be quite effective.

So when you ponder on the Butterfly effect, what should you actually think of? What is the relation between the flap of a butterfly’s wings and the hurricane in Texas?

That there is order from the chaos of the Universe.

The graph of the Chaos Theory looks like a butterfly, which gives it its name, and not from an actual butterfly.

On a final note, consider the following question: Is Chaos just Order, is anything in the Universe truly random?