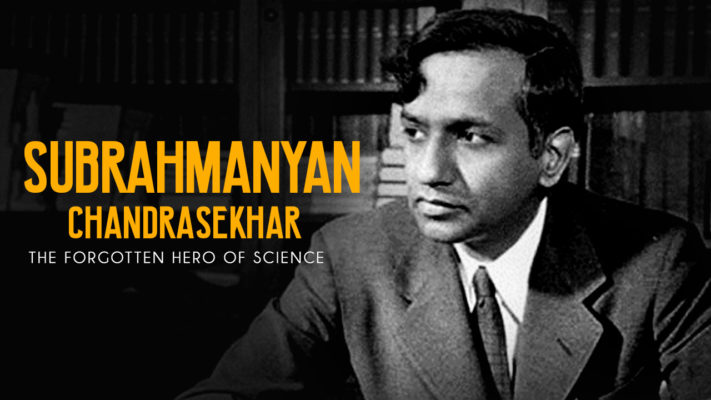 The Forgotten Astrophysicist Of India

In the year 1983, an Indian American physicist was awarded the Nobel Prize in Physics for his study on “the physical processes important to the structure and evolution of stars” with William A. Fowler. This scientist was none other than Subrahmanyan Chandrasekhar.

Chandrasekhar was born to a Tamil family on 19 October 1910. His family members were people with great intellectual attainments, which included his grandfather, who was a mathematics professor, his uncle C.V. Raman won the 1930 Nobel Prize for the Raman Effect. Chandrasekhar was a child prodigy, he started studying advanced mathematics at an early age and was home-schooled by his parents until he was 12. He developed a great interest in science and mathematics and did his B.Sc. (Honors) in Physics from the Presidency College, Madras. His father wanted him to join the government services but his actual interest always lied in Physics. It was his mother who encouraged him to attain further knowledge, and so he left for the University of Cambridge in 1930 to pursue his PhD.

Astrophysics And Other Research

Chandrasekhar at the age of just 20 gave his famous Chandrasekhar Limit. It described that the mass of a white dwarf, which is a dead star, can never exceed 1.44 times that of the Sun. This is due to electron degeneracy pressure. Once this limit is approached, the dwarf explodes to form a supernova.

He was a doctoral student of Sir Arthur Eddington in the University of Cambridge. When Chandrasekhar was invited to the Royal Astronomical Society to present his Limit Theory, Eddington ridiculed his concept in front of everyone describing it as a mere mathematical gameplay. Later in 1972 his theory was finally proven right and was of great use in the research of stellar stars and black holes.

In 1936, he went back to India to marry Lalitha, whose family was close to Chandrasekhar’s. His wife was a headmistress and her family was very keen on academics. Chandrasekhar described her as a very patient and supportive person. They shared common interests in academics, literature and music. There were no children out of the marriage and it lasted for nearly 59 years until his death in 1995. He identifies himself as an atheist when it comes to religious views.

His Remarkable Journey In America

Chandrasekhar came to the United States in 1937 and was working as an assistant professor in the University of Chicago, Illinois. There he worked at Yerkes Observatory for astronomical research. During the World War II, Robert Oppenheimer, head of the Manhattan Project for developing the first Atom bomb, invited him to join the project for his expertise in hydrodynamics. But delays in the processing of security clearance prevented him from contributing to the project.

At that time he was working at the Ballistic Research Laboratory in Maryland where he was working on ballistic problems which included flight launches. He had a unique style of mastering several fields; first, he studied the subjects exhaustively, then he published several papers on it and lastly he published books summarizing these concepts. He studied in various fields of astrophysics and applied mathematics. During his time as a professor, he taught several students. Two of his students, Tsung-Dao Lee and Chen-Ning Yang received a Nobel Prize before him.

During his entire life, Chandrasekhar won numerous honours and awards including National Medal of Science in 1966 and Padma Vibhushan in 1968. When he received the Nobel Prize he was not very satisfied, as it was awarded only for one piece of his work and so his lifetime of work got overshadowed. He donated some of that money to start a fellowship award, to be given to a PhD graduate for his/her outstanding performance in the field of Physics or Astronomy at the University of Chicago.

His legacy remains in the minds and hearts of his students and his fellow mates, who closely worked with him. Known for being an extraordinary scientist and mathematician, Subrahmanyan Chandrasekhar will forever be loved and cherished in India and all over the world for his great contribution.