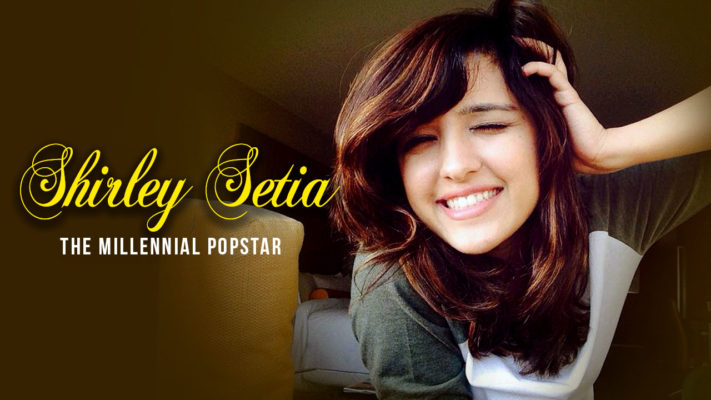 From covering songs on YouTube to making her major debut in the Bollywood music industry with ‘Disco Disco’ in ‘A Gentleman’, the 22-year-old ‘cover’ star has captured the hearts of the people with her mesmerizing voice and irresistible smile. Popularly known as the ‘Pyjama Popstar’, Shirley is a YouTube sensation and social media star with more than 6.5 lakh subscribers on YouTube, 2.2 million fans on Facebook and 689k followers on Instagram.

Her passion for music was discovered when she recorded a video for the song ‘Tum Hi Ho’ from Aashiqui 2, originally sung by Arijit Singh, in her pyjamas for a music contest organized by Indian music label T-series. Her angelic voice and charming aura not only won her the contest among the tens of thousands of entries but also opened a gateway for her to take her talent to thousands of people across the world.

Shirley Setia: The Road To Fame

Hailing from Auckland, New Zealand Shirley Setia is an Indo-Kiwi singer, performer and songwriter.  In a tweet, Setia said that her first live performance was the song – ‘Iktara’ from the Bollywood movie ‘Wake up Sid’ in 2011. Being a bright student, Shirley had no intentions of pursuing a career in music, but her voice and love for Bollywood music was a driving force, which ignited a flame inside her. After getting selected as one of the winners in the T-series music competition in 2013, she was determined to follow her heart and take up music as a career.

Inspired by legendary singers like Lata Mangeshkar and Asha Bhonsle from old times and Arijit Singh and KK from present times, Setia has made a lot of cover songs with her most popular one being the song “Sanam Re” from the Bollywood movie “Sanam Re” originally sung by Arijit Singh which was uploaded on 9th February 2016 and it currently has more than 25 Million views on YouTube.

Prior to her fame, she was an RJ on Radio Tarana with her regular show named ‘Showtime with Shirley’, airing every Sunday. Amidst the chaotic life of being a student and a part-time radio jockey, she started uploading her cover videos regularly on YouTube. Without having received any official training in music she started with performing popular Bollywood songs on stage in her hometown. She has now got into collaborations with various YouTube celebrities from US, UK, India and Canada. Few of them are Sanam Puri, Arjun Bhat, Kurt Hugo Schneider, Darrel Mascarenhas, Antareep Hazarika and The Gunsmith.

From Kiwi Land To Bollywood

With an aspiration to sing for AR Rahman, ‘the tiny girl with not so tiny dreams’ hustled her way into the limelight as she shifted her base to Mumbai and soon rose to fame with her fan following rising day by day.

She was featured in Hindustan Times and Forbes magazine as ‘Bollywood’s Next Big Singing Sensation’. Ranked among  the ‘Top 30 most subscribed channels’ on YouTube, Shirley has been acknowledged as one of New Zealand’s Biggest International Artist by the New Zealand TV Network TVNZ and has also been the recipient of the BIG Golden Voice Award for BIG Digital Sensation along with Outlook Social Media Award for OSM Musician of the year.

And The Journey Continues…

Shirley’s melodious voice has claimed her a massive fanbase of 2.2 million, which continues to grow as her popularity increases. The journey from Auckland to Mumbai has been a roller coaster ride for the ‘tiny kiwi’, but her persistence and passion has been a driving force and has turned her into a musical sensation, not just in New Zealand but in India as well. With the Bollywood growing on her, Shirley continues to shine as a music diva as her journey continues.