[VoxSpace Life] Andhra Pradesh Elections 2019 : A Cliffhanger In The Making 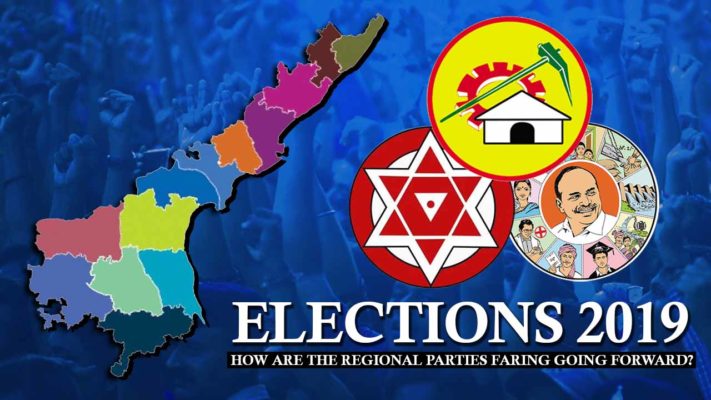 With elections around the corner, things seem to be heating up more for Andhra Pradesh residents this summer. With each day, the battle to gain supremacy among the parties is becoming more interesting. While there is hardly anything left for Congress and BJP in the state, the contest, as one would have imagined, is between the arch-rivals Telugu Desam Party (TDP) and YSR Congress Party (YSRCP). However, with Pawan Kalyan’s Janasena, parting ways with TDP, the battleground has become more open and interesting with increasing speculations on whose vote share it will effect.

The Curious Case Of Pawan Kalyan

The glitz and glamour surrounding elections is nothing new in southern politics. The star-actor-turned-politician Pawan Kalyan, who helped TDP get into power in 2014, split with the party, accusing the TDP to be corrupt and dishonest. Since then, he is actively working on his own. Often, he comes across as a rebel and his lack of clarity on certain issues was always pointed out by the critics. However, his alliance with BSP has taken many by surprise. Now, he is contesting from two places Bhimavaram and Gajuwaka, where the former has a predominant vote share of his own Kapu community. The latter has been targeted to woo urban youth.

Recently, JD Lakshminarayana, former CBI officer, who rose to fame for probing Jaganmohan Reddy on the disproportionate assets case joined Janasena. At this juncture, Pawan Kalyan seems to be making calculated moves. All these things may or may not translate into votes, but they have certainly made the other parties be more watchful and wary of him. Though many opine that he may end up like his brother Chiranjeevi during 2009, but he may still spring a surprise. He may not get the traditional voters of other parties but he will surely make a dent in some of their prospects.

There is a popular saying which goes, ‘Indians don’t cast their vote, they vote their caste.’ Although many of us cringe upon hearing it, it is still the ground reality. The elections are fought between the Kamma community supporters of TDP versus Reddy community of YSRCP. While some of the backward classes and forward communities have been favourable to Naidu, the Dalits and minorities, who were once loyalists to Congress, now support YSRCP.

A sizeable number of Kapu community, who earlier voted for Naidu because of Pawan Kalyan in 2014, may vote for Janasena now. While the traditional voters of TDP and YSRCP may remain the same, the votes of Kapu, minorities, Dalits, BC’s will be split which can be decisive in the end.

If there is one party which seem to be in total command at the moment, it is the Telangana Rashtra Samithi (TRS). After achieving a landslide victory in the assembly elections, the party is extremely confident to repeat its feat in the upcoming Loksabha elections. With KCR having already announced that he will start a national party after the results, one assumes, he already made his moves to establish himself firmly in the national politics and leave the interests of the state to his son, KTR.

Although senior Congress leaders like Madhu Yashki Goud, Uttam Kumar Reddy and Revanth Reddy are leaving no stone unturned, it won’t be easy against the TRS. With regard to Andhra Pradesh, KCR has already extended his supported to YSRCP, to dethrone Naidu. He is also in friendly terms with Pawan Kalyan. One would have to wait and see whether his jibe to Naidu, for giving him a ‘return gift’, would benefit Jagan or Pawan Kalyan.

A Mixed Bag Of Results

Overall, the Andhra Pradesh elections may well be a mixed bag of results. Admirers of Chandrababu Naidu wouldn’t want him to be defeated, as it may affect the good work he is doing post the bifurcation. Naidu was lauded for the relief measures he took during Hudhud cyclone, the establishment of KIA Motors and other welfare measures. However, off late, his contradictory statements on ‘Special Status’, blowing his own trumpet repeatedly over his past achievements as CM of united Andhra Pradesh, the recent alliance with Congress in TS Elections, which proved to be disastrous has not gone well among his own core group of supporters.

Only time will tell whether people will remember him for the good work he has done or his recent setbacks. Jagan, on the other hand, seems to be in a much better position than he was in 2014. He isn’t offering anything new to people but is still basking in the glory of his father, the late YSR, and his populist welfare schemes.

Pawan Kalyan’s charisma, star power, the desire for his community people to see him in leadership position may impact certain sections, but not the overall state. As far as Congress and BJP are concerned, the less we talk, the better. There are no credible leaders in either of the parties who can take on the regional parties and the people’s lack of trust in them is very evident. As the state gears up for the elections, it will be an interesting battle between the three regional parties and it surely will be a cliffhanger.