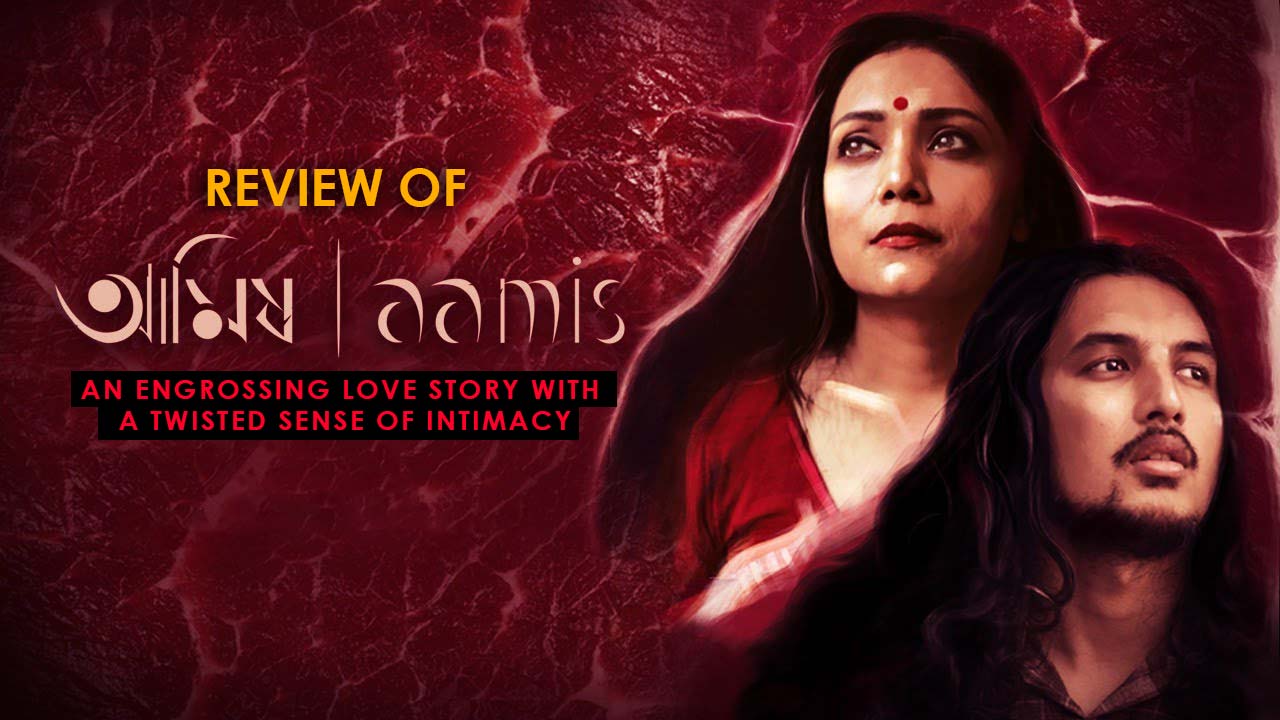 The Wait Is Over…

Ever since it made a huge splash with its premiere at the Tribeca Film Festival, Aamis has been one of my most anticipated films of the year. Added to that, Anurag Kashyap personally championed the film so much that I could not wait to see it. I missed it this year’s MAMI too, but alas with the help of MovieSaints I got my hands on this deliciously twisted love story that slowly deconstructs the various notions we have towards emotional and physical intimacy.

A Forbidden Love Story With A Deadly Twist

Aamis deceptively starts off as any other love story would. We are introduced to our protagonists getting ready for their daily activities. Sumon is an anthropology student who is doing his Ph.D. on meat-eating traditions in the northeast and is part of a meat-eating club that he started with his friends. Nirmali is a married woman who is a pediatrician and has a kid. Due to a chance encounter, Sumon meets Nirmali which leads to a sweet and tender friendship blossoming between them. The friendship gets deeper as they learn about each other which takes us on a journey of exploration with them, which they may never return from. Saying anything more would take away from that bizarre and haunting climax of the film.

An Exploration Of Sensuality Through Food

Bhaskar Hazarika with his elliptical and hypnotic narrative is questioning the various things that we think are taboos and their relevance in society. He does this by slowly immersing the audience into this moral quandary, rather than throwing us right into it. The film takes its time to make us understand why these two need each other. Sumon, who lives on his own is someone who loves to explore and wants to have new experiences in life, but he is in search of a sense of security which he finds in the motherly nature of Nirmali. On the other hand, Nirmali who is trapped in her loveless marriage is in dire need of some fresh air, away from her boring monotonous life.

They seem perfect for each other if only society could accept them. This is the point in the film when Sumon does something that changes the context and trajectory of the film. Just when we get comfortable with this co-dependent relationship, we learn how toxic it actually is. By taking this absurdist leap into horror, the filmmaker puts into perspective how easy it is to get lost in a feeling when you are in the throes of passion. The filmmaker uses various techniques to achieve this, but the most important being the use of food to depict the journey of their relationship. This makes the film feel a lot more experiential than a regular narrative. The film reminded me of the great coming of age French horror movie called Raw in that way.

Truly Exceptional Performances From The Leads

This is a very emotionally dense and authentic film with a lot of hidden layers. This kind of result can only be achieved only when you can get absolutely knockout performances from your cast. So, I was surprised when I learned that both the leads of the film were debutants. Arghadeep Baruah plays Sumon with a certain sense of innocence and childlike curiosity. His eyes are full of joy whenever he experiences something new, which tells us so much more about the kind of person he is. But the real star here is definitely Lima Das, who plays Nirmali. Niramli is a tough nut to crack, you never really know what she is thinking, and that is how Lima Das plays her. She is enigmatic and distant, but at the same time irresistible when she opens up. Just like Sumon you are waiting for the moment that her eyes light up with joy, just to witness it. The rest of the cast including Neetali Das who plays Nirmali’s promiscuous friend, Manash K Das who plays her self-absorbed husband and Sagar Saurabh who plays Sumon’s veterinarian friend play their parts well too.

Coming to the technicalities of the film, Riju Das’s cinematography is beautiful but never flashy. The camera becomes a very important tool for the filmmaker to visualize the unsaid things in a scene but never drawing attention to itself. For example, there is a scene when Sumon realizes that Nirmali’s husband is going to be back in town. The camera which had them in a two-shot till then, comes in between them framing them individually, showing the distance between them caused by this new development. There are brilliant moments like this sprinkled throughout the film, like the bizarre but hypnotic dream sequences, the various cooking montages, etc. These moments combine aesthetically pleasing images with brilliant music and sound design to accentuate the romanticism of the whole piece.

Finally, I would like to talk about the platform MovieSaints for making it possible for me to watch this film. A lot of the times I miss films at film festivals I attend and there is no way to revisit them as they never really get a theatrical release. Most of the time don’t even get a digital release. Now, because of platforms like MUBI and MovieSaints, there is a platform for these films. I hope they collect and curate a lot more films like these which have a bigger market than people realize. Keep up the good work MovieSaints and kudos to Anurag Kashyap for promoting these kinds of films with so much enthusiasm and passion.

On the whole, Aamis is a deliciously twisted morality tale about the dangers of forbidden passion. I can promise you that you have not seen anything like this in Indian cinema. Do check it out; it is out a limited release and available for streaming on MovieSaints.