Review of NetFlix’s The Irishman: A Quiet But Haunting Deconstruction of The Gangster Genre 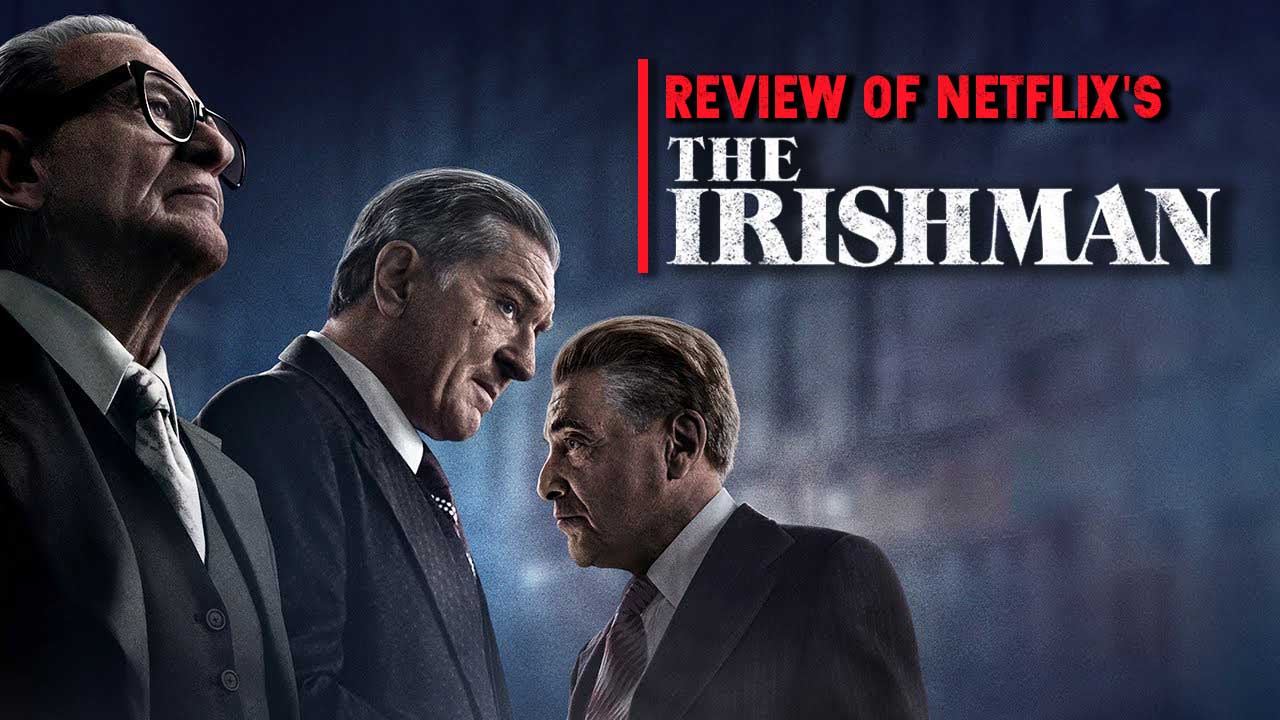 If you are a cinephile, there hasn’t been a movie that has been as anticipated as Martin Scorsese’s latest contemplative gangster magnum opus, The Irishman. The film has been in development for almost a decade and would mark his reunion with the most important collaborators in his career. While Martin Scorsese has made only five gangster films in his illustrious career, he is synonymous with the genre due to the impact those films had on the way we looked at the genre itself. He gave them a palpable and gritty aesthetic that is copied to this day but never matched. So, I was waiting with bated breath, refreshing my Netflix home page over and over again. Finally, I got my chance. The play button appeared, I clicked on it and I was transported into Scorsese’s world. By the time I got to the 15-minute mark, I knew this was different in tone and pacing. And by the end of the film, I knew that this was not just another Scorsese gangster film, it was something more than that.

The Irishman is an extremely well-observed and detailed story of Frank Sheeran (Robert De Niro) and his involvement with the disappearance of Jimmy Hoffa (Al Pacino). The film starts off with Frank Sheeran, now in an old age home narrating his life story to us. The story plays out with a structure where flashbacks are cocooned inside flashbacks. It almost feels like the stream of consciousness of an extremely old man or the fading memories trying to decipher themselves into a narrative. The two major elements of the flashbacks are the road trip that Frank takes with Russell Bufalino (Joe Pesci) and the other one being the rise of Frank Sheeran and his association with the famously enigmatic leader of the Teamsters union, Jimmy Hoffa. There are a lot of contextual flashbacks within these but these form the majority of the runtime. I do not want to divulge any more of the plot.

A More Languid and Mature Take on The Gangster Film

Scorsese returns to themes that he has been examining throughout his career like loyalty, faith, toxic masculinity, brotherhood, etc. The main departure here is the maturity with which he is re-examining them. This is also a by-product of the characters he is dealing with. These are not young and foolhardy characters like Henry Hill (Goodfellas) or Jordon Belfort (Wolf of Wall Street). By the time we meet them, they all have families and have a lot more life experience. They are not as irreverent or short-sighted. These characters are a lot more contemplative and thoughtful, which lends itself to a more mature and contemplative tone than his earlier work. While I was fascinated by this new Scorsese, I missed the energy and verve of his previous work.

The film feels a lot more ponderous and languid. The film feels like he is looking back on his own work but with a whole new perspective, one with a lot more depth and understanding of the character rather than the milieu. This especially shows with the amount of time he holds on to characters’ faces than the flashy cinematography regularly used in his films. Working again with his regular collaborator and editor Thelma Schoonmaker, together they reinvent what a gangster film should feel like all these years later again. This is amplified by the unobtrusive but quietly sublime cinematography by Rodrigo Prieto and the understated but poignant score by Robbie Richardson.

Reunion of The Century

Now coming to the biggest selling point of the film. The insane cast that has been assembled and the fucking brilliant performances Scorsese mines out of them. This marks his reunion between Joe Pesci and Robert De Niro after Casino and it is totally worth it. Both the actors totally subvert your expectations by playing characters who are not as explosive as we have seen them play before. In fact, they are quite the opposite, they are a lot quieter and more understated in their approach towards their characters. Joe Pesci absolutely surprised me because I was waiting throughout the film for the moment where he explodes, but it never comes. There are numerous scenes between the two where the unsaid things are a lot more important than what is said and they excel at this. One scene that comes to mind is the salad scene where Joe Pesci’s character gives Frank Sheeran an ultimatum in the most quietly menacing way possible.

The real show-stealer here is Al Pacino as Jimmy Hoffa. Al Pacino plays this character with all the energy he can muster, he is his classic Pacino self here. There are multiple scenes in which he chews up the scenery in a way only a master of his craft like him could. But where he really shines are the moments he has alone with De Niro. This is where we see his façade falls off and we are privy to his broken insecure self. He injects life into a film that can sometimes feel a little too ponderous. Two of the other standouts are Stephen Graham who plays a hot-headed gangster, and Anna Paquin, who plays Frank’s Icy and cold daughter who is the only person who can see him for who he is, a broken fragile insecure man.

My Two Gripes With The Film

By the time I got to the end of the film. I had two issues with the film. One is the pacing of the film, while I respect and love everyone involved in the film, I still felt like it could have been cut down by at least 20 minutes and still would have achieved the same effect. There are certain points in the film, where it feels very stagnant and I missed the old Scorsese. The other issue and this a big one is the CGI de-aging of the principal cast. I understand the reasoning behind it, but I feel like the technology is not there yet. There are points in the film where Robert De Niro’s face looks like its made of clay or plucked right out of a video game.

All in all, The Irishman is a staggering masterpiece that every fan of these great masters of the craft must watch. The only caveat being that, it is not like any of their previous collaborations. This film in tone is a lot closer to Scorsese’s Silence than it is to Goodfellas or Casino. So, do watch it, but just do not expect the frantic intense thrill ride that you are used to. Strap yourself for a poignant deconstruction of the gangster persona and a tale of a delusional man who cannot take responsibility for his careless actions.