VoxTalks With Amulya Malladi : The Indian International Writer On Celebrating The Culture Of A Nation Through Her Works 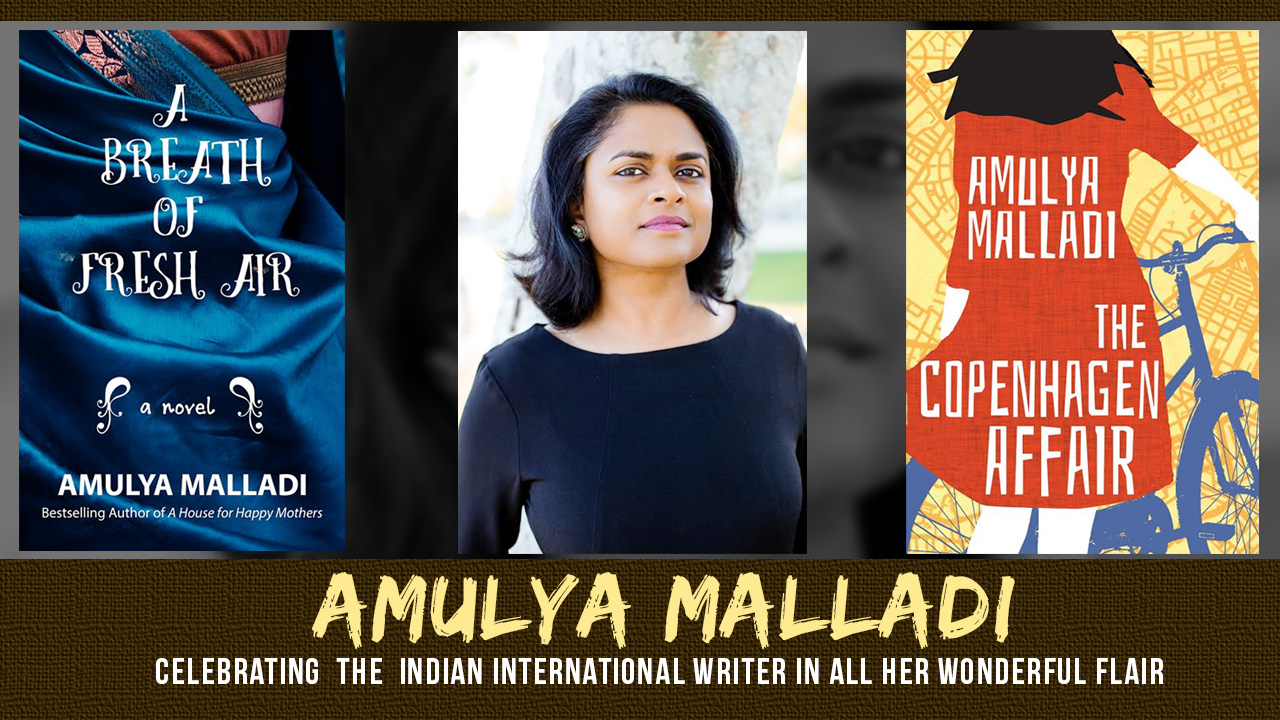 On this fine day, we go beyond the usual and converse with one of the most promising writing talents of Indian origin, Amulya Malladi. Amulya Malladi is the author of seven novels, including A House for Happy Mothers, The Sound of Language, and The Mango Season. Her books have been translated into several languages, including Dutch, French, German, Spanish, Danish, Romanian, Serbian, and Tamil. She has a bachelor’s degree in engineering and a master’s degree in journalism. When she’s not writing, she works as a marketing executive. After several years in Copenhagen, she now lives outside Los Angeles with her husband and two children. As we sit down to talk to her about modern literature, there were some wonderful things we had in place.

First things first, where does the story of Amulya Malladi start as a creative writer? Looking back would you say there was a particular point in time which triggered a passion for writing or was it a collective of events that led you to it? And how has being in the reception of two different cultures (Indian and Western) affected or rather influenced your writing styles?

My father was in the army and there was always a library in army camps. I got hooked on Enid Blyton books; it started there with The Magic Faraway Tree, The Adventures of the Wishing Chair, and the Malory Tower, Famous Five and Secret Seven series amongst others. When I ran out of books to read I began to write the books I wanted to read. I wrote my first book when I was 11 years old. It was fifty handwritten pages; a story about some Indian children who solve the mystery of stolen temple jewels in a village. After that it became an addiction of sorts; a way to escape the real world into a world I created. As I grew older, I began to read other books, the classics like Huckleberry Finn, the not-so-classics like Harold Robbins and Sidney Sheldon novels; Gone with the Wind, Catch-22, Binodini, Malgudi Days, Ruskin Bond novels … and many, many others. The more I read, the more I wrote.

It took a long while to find my voice. I can’t say what influenced me because my voice has changed since my first book was published nearly fifteen years ago—and now in my forties, I think I have a new voice. Also, I have never thought of my influences being western or eastern … just writers who have inspired. The world fell in love with your writing flair when “A Breath Of Fresh Air” happened. Could you in a brief way explain to our readers what the book was all about, and how does it become an important vehicle for propagating Indian culture worldwide?

I can’t say the world fell in love with my writing; rather I think the world doesn’t really know me—I have an audience, which is growing but no more. Also, I don’t think my book became a vehicle, important or otherwise in propagating Indian culture worldwide. I think there are many others who have done a far better job of this with their influential writing.

Regarding, A Breath of Fresh Air, it was conceived when I was 11 years old. The year was 1984 and we were living in Bhopal. That was the year that the Union Carbide plant leaked methyl isocyanate gas, killing scores of people. I wanted to find out how a major news event affects an individual and in A Breath of Fresh Air, I explored the impact of the gas leak, considered the world’s worst industrial disaster on one woman, Anjali.

Continuing with the above thought, your next project came out in the form of “The Mango Season” which spoke of a young woman and her struggle to break away from the well-established traditional societal norms. We are curious as to what are your thoughts when it comes to non-resident Indians, and in this present age of global oneness, how do you keep a concept of the unacceptability of cross-cultural marriages as relevant as ever?

The Mango Season has released fourteen years ago, so it’s been a while and I think a lot has changed in India and the world. There was a time when everyone wanted their children to go to the United States, but I hear that has changed as there are more and more opportunities in India.

However, cross-cultural marriages are not unusual; but still uncommon enough. My husband is Danish and we lived in Denmark for fourteen years and certainly, there were cross-cultural couples but mostly Danes married Danes. All my friends from India, but one, are married to other Indians, some they met in India and some they met in the United States where they came to study as I did.

Marriages are interesting topics to discuss in fiction—and a cross-cultural marriage just adds more masala to the conflict of marriage. We came across a thoughtful review which put across a valid description for your next work – “Serving Crazy With Curry”, which said, was A portrait of expatriate nostalgia, shaded heavily with immigrant identity angst. How true do think these lines reflect the novel. And in the three novels that we’ve talked about, what do you think is a common string of emotions and do you always maintain them even in your recent works?

I once asked an editor of mine what my books are about and she said I wrote about women trying to find their place in society.

Serving Crazy with Curry for me was a story about a family—about mothers and daughters; husbands and wives; and sisters. Geography was the background for the story and definitely, the expatriate nostalgia was part of it; as was the identity crisis immigrants can face.

When I write, I struggle with geography. Where do I set my story? Right now as I work on a new novel, I don’t know where to set it because I’m unfamiliar with Orange County where I live now so I can’t set a story here with authenticity; however, when I write about India, I worry that the India I know is many years ago.

My next novel is The Copenhagen Affair and for me, the geography was fabulous because I wrote about a city I know well and people I know intimately.

Moving beyond your novels, you have recently written for a web series, “Island”. Could you walk us through the project in the terms of what’s it about? And how easy or difficult was it for you to transition from Novel writing to web series writing?

Ø (Island) sort of fell into my lap because I think the director who was approached with the project didn’t know any other English writer. I find scripts far easier to write than books. A script is a blueprint for a final product—while the book is the final product. In a script, I can merely say they went to a restaurant; but in a book, I have to describe the restaurant. The hard part is the number of people who comment on your script and the way it evolves because of all this input. But we got through it and the director did a great job, and I was lucky enough to win an award for writing a script—my very first and I joked the last—but now I’m noodling with a new idea with the director and producer so who knows.

Coming to your story, you work with earthy and relevant concepts which resonate easily with readers in India. In this context, how important do you think it is, to understand the psyche of a reader in a given situation and location. Or do you think it is easier if you can transport to a fantastical world where anything can happen?

I don’t write for a reader so it doesn’t matter, really. I write for me, usually because I want to answer a question. “What happens when … ?” I’m a linear writer and I write in the real world; it’s a preference. But maybe there will come a time when I will be able to explore fantasy as well. From “A Breath Of Fresh Air” to your recent yet to be released work “The Copenhagen Affair” how would you describe your evolution as a writer as. And since not many of us know much about your latest work, could you tell us what it is and when can we expect it to hit the stands?

The Copenhagen Affair is a comedy about depression. It’s my love note to the city I love. I started to write the book because I was depressed and hadn’t been writing. I usually read what I write to my husband so I thought writing a comedy would give us both something to laugh about. It wasn’t supposed to ever get published. But here we are.

The book is the story of a woman who’s recovering from a nervous breakdown and moves with her husband to Copenhagen for a year as an expat from the United States. And as she recovers, she goes on an adventure. My agent came up with the coolest tagline for the book: How do you say “getting your groove back” in Danish?

Regarding my evolution as a writer in the past decade and a half? I am older and that influences what I write about—but it’s difficult to describe because what I wrote then was authentic for that Amulya; a younger Amulya as this is for an older one.

Lastly, we are in an age of Blogs and Kindle books, which open up more avenues for people to publish their stories. What would you suggest to the aspiring writers as to the use of these platforms and what do you think will be the future of publishing?

The medium of getting published is the business end of the deal and I recommend getting an agent who can help you navigate that.

I think the future of publishing is the hybrid model we have today—some eBook and some not. Who knows, we maybe shuttling towards the holo-novel concept that we know of from Star Trek, where you are virtually integrated within the story as a character and can choose to change direction as you see fit as the reader. I wouldn’t mind writing one of those— or even experiencing them.

So, my fellow bookworms, head to Amazon to find Amulya’s latest works and of course follow her Facebook page for further exciting work updates. Until next time Ciao..!