[Vox Selects] Lipstick Under My Burkha: A Triumphant Tale Of Identity And Celebration Of Womanhood 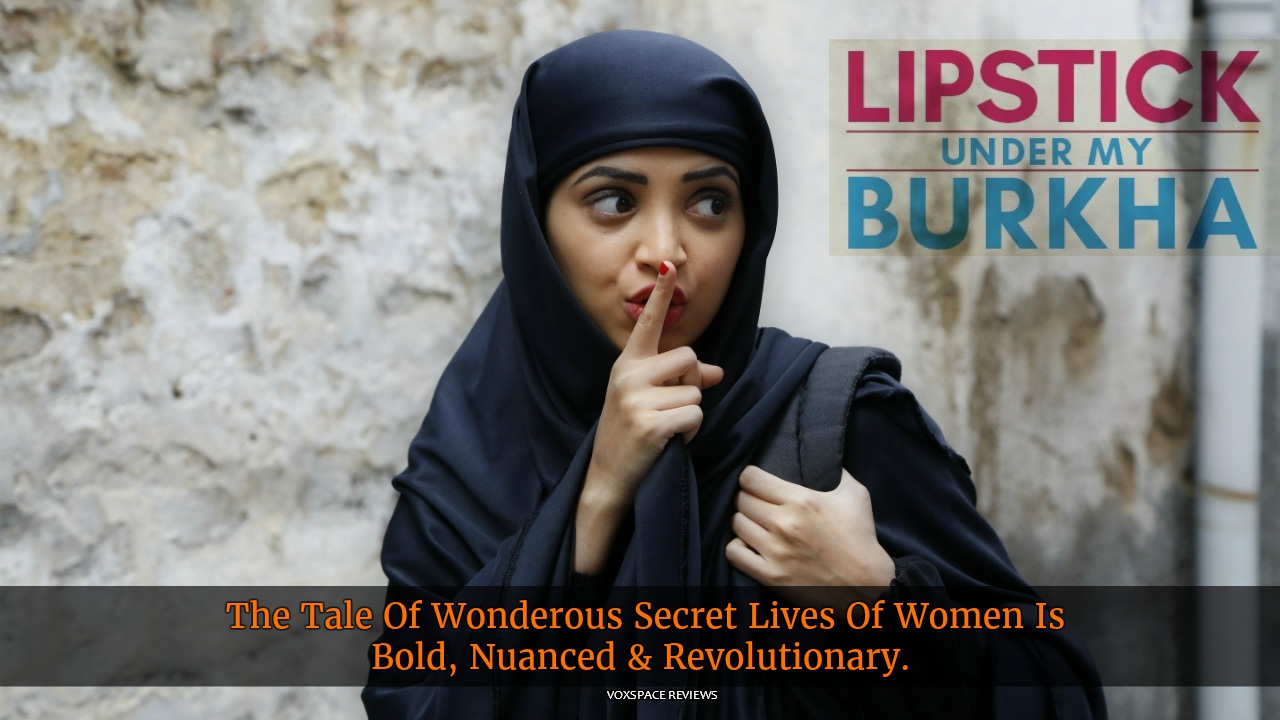 Women – All The Way Ever:

Women, more mysterious than the love-child of the Lochness and the Unicorn, hiding out in the Bermuda. What do we want? What do we need? And What does it mean when we say No? (No, honestly, it just means No) What do we do all day?

From behind the veil, four stories peak out; divided by Life’s randomness, united by patriarchy’s continued oppression of the Feminine. But wait, I’m not gonna make this sound academic and thus “boring” for a percentage of our population. This movie, Lipstick Under My Burkha, had me laughing from the beginning until the very end. There is never a dull moment, no slack in pacing or editing. The acting, well, I don’t believe Ratna Pathak Shah and Konkona Sen Sharma, need me to wax eloquently about them. And newcomers Aahana Kumra and Plabita Borthakur, had me hooked and (not so) silently cheering for their characters.

For a film whose release had been mired by the Censor board controversy, it is quite fun to watch the movie mirror it thematically over and over again. Set in Bhopal, Lipstick Under My Burkha gives you a sneak peek inside the lives of four women living in the same building, moving in and out of each other lives, existing in the fringes, fighting their own battles and secret desires.  The protagonists are forced to censor themselves over and over again. Their voices, their clothes, their sexuality. Behind the guise of honour and the supposed chaar deewari (four walls) that keeps them “protected”.

The Secret Lives And Their Significance:

Old, young, married, sexually active, these women are desperate to find a version of the life they can excise control over, no matter how small or insignificant. From the elderly widow forced to hide her sexual fantasies behind ledgers, religious devotedness and fake identities, to the college-going teenager who doesn’t mind stealing a life she rightfully believes is hers, the film does not shy from showing how entirely fallible, complicated and utterly human these women are.

Work is where they find meaning, a sense of self-greater than the sum of their lives, a refuge, but not always. Sex is a means of control, always in the hands of the men to use and abuse. Whenever these women try and seek their liberation, sexual or otherwise, they are promptly punished for it.

Written by Alankrita Shrivastava, Lipstick Under My Burkha is entirely and refreshingly devoid of the male gaze. There are no gratuitous shots of women fixing their cleavages, no shots of women walking past men and their “appreciative” looks or cat calls. They are desired, but never reduced to their body parts. To say these women only dress for themselves is a lie; clothing is a cultural construct designed to show them their place in society, married, widowed, Muslim. Secretly they try and break away from their moulds, not always successfully though.

Beautifully shot, thought out, framed and constructed, Lipstick Under My Burkha, takes you on a roller coaster ride, women have been on for centuries. I saw and heard all the women express similar sentiments after walking out from the theatre. They all saw themselves or someone they knew in the women on screen. We laughed and gasped together. Black comedy and sharp wit. I found myself chuckling even in places I believe the men were slightly horrified. But that’s what this movie does, it makes you confront the absurdity of the lives women lead, jumping through a million honour/compromise/placation hoops to survive.

Our Recommendation For Lipstick Under My Burkha:

The film offers no solution, no clear cut answers, except for one. The moments where women help each other out are where the revolution will always nurture itself. From helping an old lady navigate an escalator for the first time to aiding a teenager sneaking out to her first party. These moments may never seem like much, but as women know, they are enough to give us a taste of freedom. And once we’ve had a taste, we aren’t ever giving it up.