[VoxSpace Selects] Vijay Nishanth : Conversations With Bengaluru’s ‘Tree Doctor’ About Saving The World One Tree At A Time 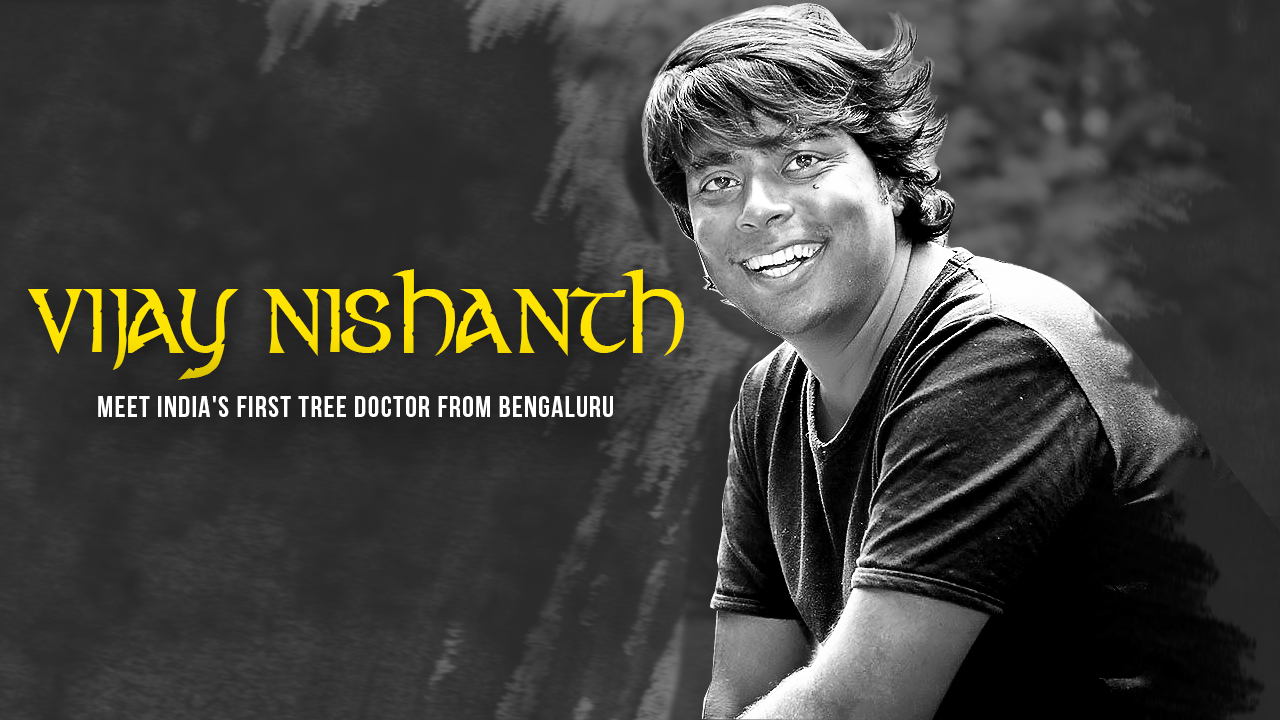 Introduction To The Tree Doctor

Last year, when we at VoxSpace set out to bring out stories which are relevant to the present living and society, we came across an interesting name. That of the Tree Doctor. Or more specifically, the Tree Doctor of Bengaluru. This immediately caught our attention. In time, we came in contact with the man behind this moniker, Vijay Nishanth. Vijay through his reverence towards nature has in the past few years brought about a sustainable change in Bengaluru’s dwindling forestation. He has, through physical and technological means, ensured that the density of Trees within the city remain unperturbed. In bringing forward his initiative, Vijay, the Tree Doctor, has come up with a web portal called Vruksha.com, which exists as a solution hub for identification, protection and preservation of Trees across the city. The technological tools that Tree Doctor has brought out also make tagging of trees a valid option. A concept which is called Tree Mapping. Thus, with so many interesting things to learn about from Vijay Nishanth, here are our conversations with the Tree Doctor.

First of all, what’s the story behind the interesting name, Tree Doctor, by which you are famous in Bengaluru? And how did you end up getting that name?

When in MEG (Indian army) recently I had presented myself as they introduced me as the Tree Doctor. As they did, everyone had the same question on their mind. Who is a Tree Doctor? Where ever I go that’s a question I am posed majorly. Additionally, people refer to me as the one and only tree doctor in India.

From a young age, I used to volunteer for BBMP forest cell and used to see a that people had very less concern towards the existence of trees. Be it chopping, diseased or causing mortal damage to trees from poisoning. Since I was a kid, as all of us, I could understand the meaning of a tree’s life, the pain it goes it goes through in a lot many ways. As an Intern at A TREE (NGO), I went onto learning about urban forestry, including aspects of the health of trees and their existence.

Later on, with my own interest, I started learning about identifying and treating specific diseases which are affecting the trees today. Now, I have worked for BBMP forest cell, forest department and MEG (Indian army) to name a few reputed ones. Eventually, it’s the people who gave me the name, The Tree Doctor, as I grew successful in saving trees which are in the public domain. It feels great when even the children call me Tree Doctor, as well. However, the most I do is that I go through a lot of references, interact with natural scientists and a few traditional methods to save the trees. Most of the times we talk about Deforestation on a lighter note, but not many of us actually go to the root cause and try to change the situation. Why do you think this is? In that context what drove you to the current movement of saving and healing trees?

As we are getting greater urbanization, people are in the mood of earning and settling for a better life. Of course, there is nothing wrong with it. But, today, now when you see how most of the urban life is like in Mumbai, Bengaluru, Most of North India, even Houston, where normal living is being challenged due to unpredictable flooding. We all have come across theories and articles, which clearly say that you just cannot kill the ecological system in the name of urban development.

As a teenager, I had sensed that this day would come. So, I just decided to address this issue, by becoming a part of it and deriving a solution in time. It is alarming that global warming, drought, water problem today is an unshakeable reality. Therefore, it’s very important that we keep the urban populace aware of their actions, and the repercussions of uncontrolled urban development. That’s where I come in and do my bit in creating awareness. In one of the articles about you, you mentioned accountability of trees via a Digital Mapping system. To us who do not know about this, could you briefly explain how you go about ascertaining the accountability?

With a clear working model with vruksha.com, as are now maintaining all the documentation on Trees in three wards. Now we literally know what is happening with each tree per se. For example, we can see that a neem tree is being reassessed, or when a 40-year old Tree is cut down. It is all accountable now.

Because of this, we can take immediate action, and perhaps replant trees in place of the felled ones and thus maintain the same green canopy. Bengaluru’s Ex-Deputy Mayor referred “Project Vruksha” as a mapping solution which provides clear accountability for a tree. We believe that until and unless, we don’t know what we have, we wouldn’t know what to do in preserving it. A movement like an environmental preservation is successful only when people are with you. Under Project Vruksha, do you take up any steps in educating people about saving trees? And what are the main reasons that people cite as their excuse for cutting the trees? Also, which areas in the city have you identified with the least dense forestation?

We have been consulted by almost all Resident welfare associations within the city. We also take time to educate them from time to time. Recently, within HAL stretch, we conducted Tree census, and guided Vinayak Nagar Welfare Association, in stopping cutting down of older Tress within that stretch. Additionally, we guided the Sarjapura Welfare Association, in carrying out ‘India’s first crowd-funded tree transplantation’. Thus, we have been successful in saving four trees within the area. Also, Project Vruksha collaborating with Azim Premji University, brought out the Ecological report on steel bridge flyover and showed its importance in maintaining ecological balance. This for us was a huge accomplishment.

In addition to these causes, we are always in touch with the local government to conduct Tree census for the entire city of Bengaluru, and from the past few years, we have been enhancing the technical aspects of Vruksha. In some time soon, we will be coming with a new advanced version, which has never been used for the tree conservation in the urban city, and which will be a pan India campaign.

It’s almost been 7 years since you established Project Vruksha. Looking back, where do you think you faced the greatest difficulty? Also, till this point, where have you received help and support from, specifically from NGO’s, Karnataka State Govt, and others?

It has been a long journey, but our team has looked out for a sustainable solution. It gives me immense happiness that Project Vruksha, pioneered the concept of tree mapping in India. A few cities in the country, have come forward to implement this idea which will be announced soon. Our team further is looking at a real working prototype, which we believe can be achieved with the small data from the past two years. The Support is very good with every corner of the community. Healing Trees is an alien concept to many of us. As you are the Tree Doctor, could you explain how one can identify ailments in trees and is there something we can do to rejuvenate them with simple means?

It’s a bit tough job, as it needs years of experience in identifying species and in turn define what is truly happening to a tree. As I am camp-ailing regarding tree health, the diseases and remedial measures now, I plan to update the website Vruksha, soon with all these details. Additionally, I will be training a few tree doctors too in the future. For a few cases that we have done previously, please visit the Vruksha page.

So that was Vijay Nishanth explaining to us all we need to know to do our part in saving trees. Let’s join hands and do what we can in making the world a better place to live in.

Related posts:
[VoxSpace Life] WhatsApp Recreates Polling Style With A Difference Amongst The Masses
[VoxSpace Life] Mumbai’s BEST Bus Conductor : A Day Inside The City's Transport Lifeline As Told By ...
[VoxSpace Life] Death Of Innocence : An Overview Of Syria And Its Ongoing Conflict