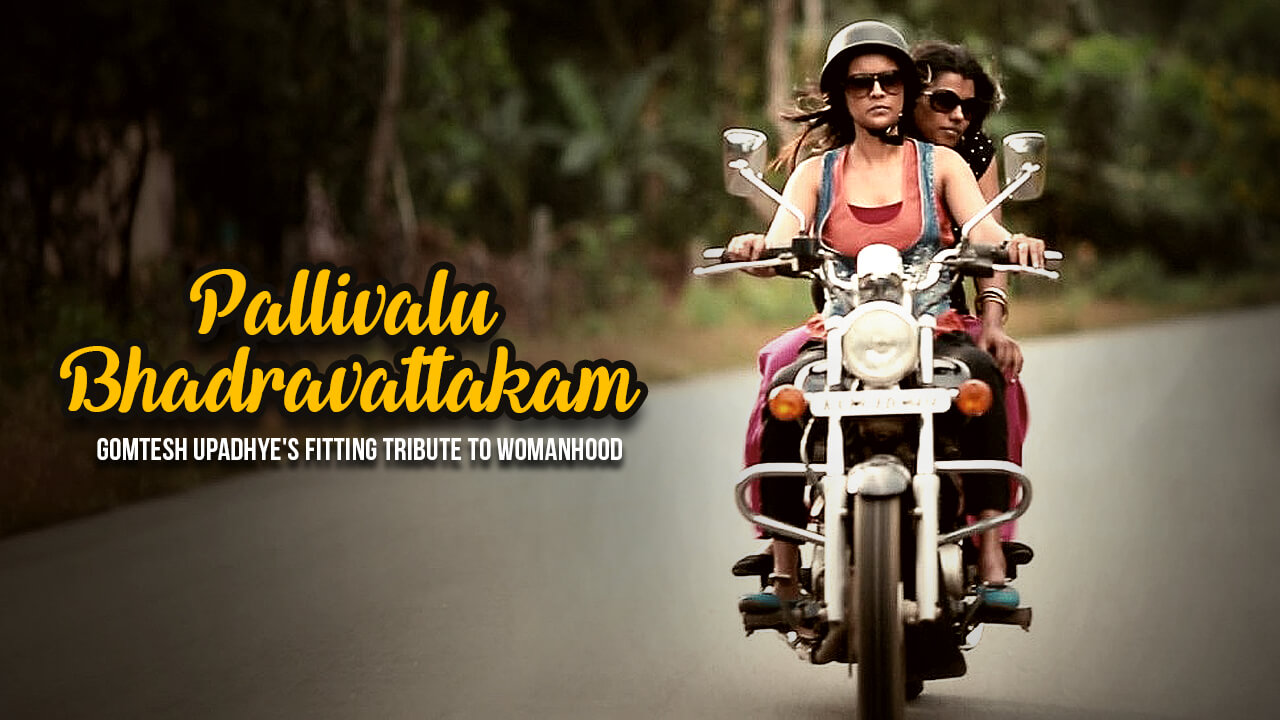 This song is a breath of fresh air and an unintentional satisfaction to a feminist’s ego. Caught up in the monotony of life and in a struggle to keep relationships alive, we miss out on small pleasures in life. The age-old tradition of women being responsible for playing a role of being homemakers is slowly shifting as most of them have even equalled or gone beyond this stigma and proved themselves. And Gomtesh Upadhye delivers something that is so rare and tangible to see in today’s video presentations. Gomtesh previously had managed to bring the world to notice his visual sense and musical awareness, whilst at the same time bringing out a stunning portrayal of soulful binding, through his first feature “Neeye or Neeve“. And he proves his mastery over skill here in Pallivalu Bhadravattakam as well.

A Musical drama that breaks barriers by portraying women (Sowmya Jaganmurthy and Divya Shetty Shridhar) who are beautiful in their own right. One with a tinge of masculinity and the other character bound by feminism runs melodiously in the background leading the viewers to focus on the act created by the cast as they travel. Its casually gives us the current story of a woman seeking the love of her husband. His needless priorities and commitment towards work corner her little pleasures, whereas her companionship, reflects parallelly and opens up an avenue to pursue things she had been missing.

We at times get caught up in the monotony of life and in a struggle to keep relationships alive, resulting in leaving behind small pleasures in life.  It is an endearing song picturing a day of escape to find oneself, about friends who understand and stand beside each other in times of need, is liberal to emotions and emotional desires. It emerges successful in portraying the independent women of today and draws credit to the actors’ performance.

On a side note, this lyrical piece reminds me of the movie “Parched” (starring Tannishtha Chatterjee, Radhika Apte, Surveen Chawla, Adil Hussain Sumeet Vyas and Lehar Khan), woven rightly into a simple song. They and this song share a common storyline and vouch for the power of women, against the atrocities they face.

Pallivalu Bhadravattakam – The Lore And The Meaning Of The Song

The meaning of this Malayalam folk song, performed at a temple dance ritual called Mudiyettu, during Goddess Bhagavathy’s festival, comes across in the form of a tale of victory and vanquish.

Summary: Darikan, the demon, was given a boon from Lord Brahma, the creator, that he would not be killed by any “man“. This prompted him to be power hungry and hence, he grew to be a threat to the Gods themselves. After several failed attempts by the Gods to slay Darikan, Lord Shiva, the destroyer, invoked Goddess Bhagavathy, the warrior in her fiercest form, to kill him. As she, being a woman, was not bound by the boon’s rules,  she establishes her victory over him. This story forms the crux of this video presentation by Gomtesh Upadhye’s true portrayal of feminism in a form which is purely glorious and uplifting.

Additionally, you may check out other presentations basing out of the same songs here,

The musical duo of Amrutha Suresh and Abhirami Suresh perform this enthralling piece on Pallivalu Bhadravattakam through their band “Amrutam Gamaya“.

The same folk song was also made famous by Vidya Iyer (Vidya Vox) in her mashup presentation,

Let there be Victory..!!