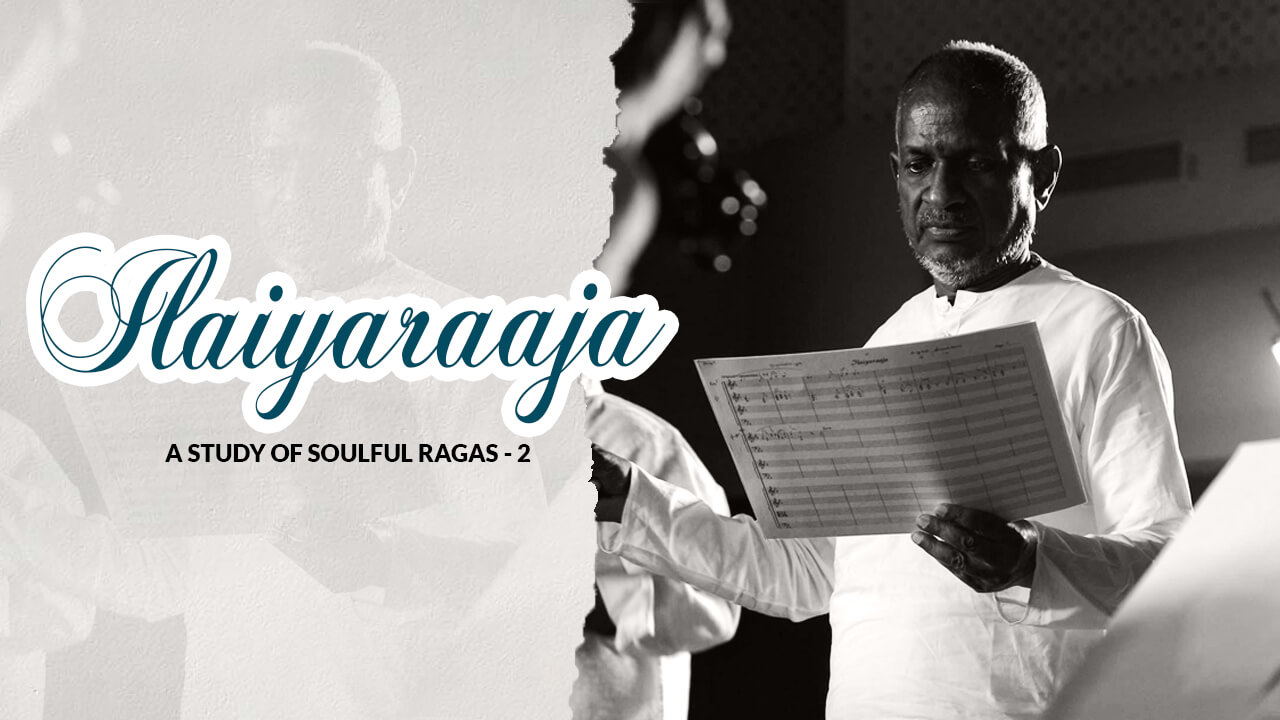 With Maestro Ilaiyaraaja’s concert around the corner in Hyderabad for the first time ever, there is no better time to dwell in those raagas which he has not just redefined but also excelled in. In part 1 of my article, I gave a peek into minor scales, Nata Bhairavi and the cheerful raga Pahaadi for which the Maestro always had a special liking. Here are some more shades of the Maestro’s raga usage, which continues to intrigue the curious listener!

The Quest For Philosophy With Sindhu Bhairavi

Sindhu Bhairavi is an appealing raga which is greatly known for its philosophical overtones. This raga has been predominantly performed by Hindustani artists and one of the most popular anthems “Mile Sur Mera Tumhara” by Doordarshan is also based on the same raga. Many of the composers from black and white era have explored the melancholic and estrangement side of this raga but as the Maestro is unique- he has got into various shades of Sindhu Bhairavi with such expertise that it would amaze even a master musician! Here are some of the picks in Sindhu Bhairavi which evoked emotions “apart” from the usual.

The routine norm of a hero introduction song being too preachy or heavy sounded was broken time and again with this amazing composition. While the hero speaks of deep yet easy to understand philosophy (from the golden words of lyricist Veturi) of the so-called youth, the Maestro plays around with Sindhu Bhairavi with rock and roll, Pop and what not? This song can be termed as timeless because even today it sounds as trendy and appealing as a modern-day number.

Sindhu Bhairavi could be the last in the mind of a composer when a scenario like a laid-back duet is given. But obviously, the Maestro is known for not only breaking rules but also creating new ones. A late night romantic duet is composed in a deeply philosophical raga such as Sindhu Bhairavi with such precision that it becomes quite hummable even for a layman! The 10-second prelude aalap (alapam in Carnatic) of Chitra is enough to say how brilliantly Sindhu Bhairavi is unleashed in this number. While staying completely in the realms of Indian Melody for the pallavi and charanam, Maestro freaks out in a calm way by introducing various hues of Sindhu Bhairavi in different genres of music!

Sindhu Bhairavi by at large is not an obvious pathos raga as per the classical norms. However, the raga when tweaked with Western Minor Scale effect would bring out amazing possibilities. Maestro did exactly the same for this composition, which is also the last penned song by Acharya Athreya. While SPB balances out the Indian melody and emotion during the pallavi and charanam, the interludes are Western Classical Connoisseur’s delight!

Two strangers in trouble meet in dramatic circumstances while on the way to the exotic location of Goa. The hero understands the sad past of the female lead and tries to soothe her about a better tomorrow! What a wonderful scenario this is! Instead of choosing heavy orchestration or too powerful and inspiring lines, the Maestro uses the philosophical side of Sindhu Bhairavi for this number. While speaking about the inevitability of life, the raga perfectly emotes the possibilities of optimism and vigour which everyone should look forward to!

Within the boundaries of Carnatic Music, Suddha Dhanyasi is a purist raga. It evokes strong devotional fervour with peace, balance and of course – great pristine feel. But the Maestro doesn’t stop there! While remaining grounded to the original qualities of the raga, the composer touched those magnificent limits and even went beyond it. He added western based genres such as Pop, Rock, Disco, Jazz, Rock and Roll. That is the reason why I’d call Maestro’s perception of Suddha Dhanyasi as “Spunky!”.

An all-time favourite of every Telugu film music lover, there is more than which meets the ears in this composition. While the prelude is like an ode to Ennio Morricone’s Cowboy themes from the golden Hollywood era, the song magically transforms into multiple genres like a chameleon. The first interlude is a dancer’s delight with the best of 80s Jazz drums, the prolific display of Jazz keys is a highlight in the second interlude. This song remains to be one of the best ever composed Suddha Dhanyasi numbers forever!

A breezy duet with nuances of romance is breathtakingly unleashed in this song. There is an aura of dreaminess throughout the song- let it be the faint chorus, brilliant bass guitar, or the magical combination of SPB and Lata Mangeshkar. Despite going to other alien notes, the song remains faithful to Suddha Dhanyasi throughout!

Here, the Maestro fuses the best of Carnatic Music with the racy surge of emotions of the female lead. Maestro’s riveting humming blends effortlessly with the high pitched vocals of Vani Jayaram. The varying tempo, the exhilaration felt by the lead characters – literally, everything can be “heard” in this song!

A beautiful dialogue between an independent female lead and a persistent male lead is brilliantly unleashed in this magical composition. While both the opinions are stark opposites, there is something which brings them together eventually. This fact is amazingly explained by Ilaiyaraaja through his timeless interpretation of Raaga Suddha Dhanyasi!

A relatively newer album of Ilayaraaja, this song is an outright celebration of the return of Lord Rama and Sita back to Ayodhya. The grandeur, tradition along with some beautiful charanams are a delight to hear. The song has become so widely admired and popular that- many of the performances featuring Telugu Songs are beginning with this number!

The Grandeur Of The Maestro Achieved With Mystical Mayamalavagowla

Mayamalavagowla is very intriguing, it is even said to have mystical capabilities thanks to the name. It is also heavily used in Arabic and Middle Eastern music for the delight of those mystics and gipsy folks. But our dear Maestro brings out the feelings of romance, funkiness and even craziness to this raga through his compositions! This particular raga has been comparatively less explored by composers before the Raaja-era. But Ilaiyaraaja’s quest towards Mayamalavagowla opened new doors for many next-gen composers to experiment on it even more!

Speaking of the friendship between Vamshi and Ilaiyaraaja would take up a new article altogether but this song is one example to showcase their amazing working chemistry. A song which is a deep dialogue between the two lead actors debating over classical dance is amazingly shown in the mystical Mayamalavagowla!

A song which needs absolutely no introduction at all. By fusing western scales with Indian melody and tinge of the folk element in it – there is nothing to stop Maestro in this regard! The biggest asset of the song is it gets right into the field from the word go! SPB- Janaki’s mesmerizing singing chemistry, Veturi’s tantalizing lyrics and breathtaking interludes make it a Mayamalavagowla masterpiece!

Until the late 80s, it was Ninu Veedani Needanu Nene – which was termed as the all-time ghost song. But Ilaiyaraaja redefines the feelings of a ghost with this amazing number. He shows that the Ghost can also have a sense of music and even great knowledge of Mayamalavagowla! It is Horror in beautified emotion- if I am asked to explain!

A lesser known song which is made under the after-effects of Yamaho – but still retains the brilliance of Mayamalagowla. The rhythm has an essential folk element to it making it even more enjoyable to hear. This song makes anyone realize that beyond romance- there is philosophy!

The defeatist mentality of the hero is greatly depicted through Mayamalavagowla in this song. No matter how much you put an effort in something, the ways of the world go on in one way- the charanam entirely speaks of this exact fact throughout.