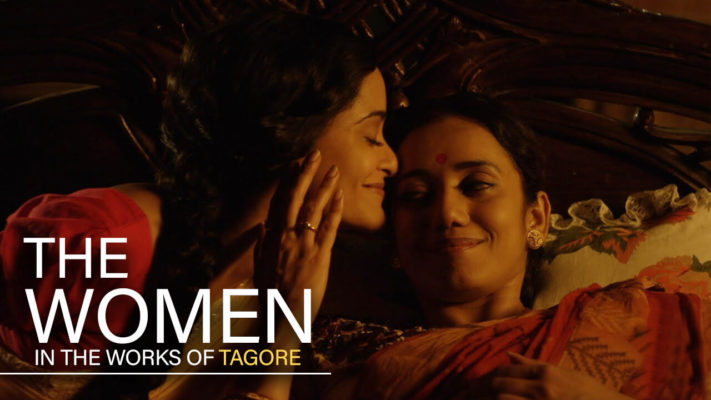 “Men can only think. Women have a way of understanding without thinking. Woman was created out of God’s own fancy. Man, He had to be hammered into shape.” Rabindranath Tagore, the first Indian Nobel Laureate, was a literary gem, a creative genius and an accomplished polymath. His writing had a sublime freshness to it. He had magic in his words; while reading his works one could imagine the characters coming to life in front of their eyes. His writings were based on the traditional values of India with the touch of western thoughts. He was a modern, forward thinker.

Special mention should be given to the women characters of his work.  Rabindranath Tagore portrays different traits of women in his writings. From a mischievous child to a wise old woman, his work covered many shades of women personalities. The women in his writings mirrored the women of the real society. The circumstances, emotions, and decisions of the women can correspond to the real life. Few of such women are –

A Wife’s Letter is a story which brings out the deep anguish of a woman who has been ignored by her husband only because she is intelligent.

The story is a letter which Mrinal writes to her husband. In the letter, she mentions the standards of society, the way they have labelled every woman in different categories. They perceive a strong-willed and intellectual woman as someone to be aware of. She also observes how the world wants the wife to be always submissive to her husband and to not hold any opinion of her own. She also shares her insight of the poor and cruel treatment of an orphan girl who is ignored by her own sibling. Throughout her life, she felt bound by the shackles of preconceived rules of society until the day she took the step of liberating herself from her husband.

The most powerful line Mrinal writes to her husband is “Removed from the Shelter of Your Feet”.

The shade of woman portrayed here by Tagore is that of patience, freedom and self-discovery. The suffering of her for 15 years shows her patience.  It shows how enlightened Mrinal felt after leaving her husband and following her own path, without being bound by any rules. It also shows how strong a character was Mrinal, to be able to free herself from the shackles of lifelong suffering.

Subha is the story of Subhashini, a mute child. The story reflects how a disabled child is seen as the world’s biggest burden by her own parents. She is depicted as a silent weight upon the hearts of her parents; and how the entire world seemed to think that. Because she did not speak, therefore she did not feel, they discussed her future and its own anxiety freely in her presence. Though hurt she understood her parent’s predicament and let go of all the grief in her heart.

The story also reflects another angle of a speechless girl’s life, i.e. of her deep lifelong connection with other speechless beings, her friends, the animals. They share a very strong bond where the expression through their eyes was enough to understand each other. This bond gave her the will to move on.

From the words of  Gurudev “those who from birth have had no other speech than the trembling of their lips learn a language of the eyes, endless in expression, deep as the sea, clear as the heavens, wherein play dawn and dusk, light and shadow. The dumb have a lonely grandeur like Nature’s own”.

Rabindranath Tagore here portrays the woman as one who has perseverance, understanding and friendship. Subha persevered and endured all the suffering which comes from being disabled. She understood the predicament of her parents and tried to be of less of a burden to them. Her deep friendship with her dumb friends would remain as a lasting experience. Through all her life Subha only faced suffering, but she still persevered and found solace in life.

Monihara is a story where the obsession of a wife leads to the insanity of her husband. In this story, Manimalika, the wife, is passionately obsessed with jewels and shows a dime worth of love for her husband. The situation is vice versa in the case of the husband. She leaves her husband because of distrust towards him, which ultimately leads to the husband becoming insane.

Rabindranath Tagore portrays the character of Manimalika as an obsessive, greedy and distrustful woman. She could not even trust her own husband who bought the jewels for her, who loved her so much.

Kamala, The Story of a Muslim Woman –

This story focuses on the life of an orphan Brahman girl, Kamala, who is very shy, timid and beautiful; she is cared by her uncle but is resented by everyone else in the family. After her marriage, on the way to her in-laws house she is attacked by bandits and her in-laws abandon her. The house where she grew up refuses to take her back stating that she has turned casteless. Then she is given shelter by a Muslim stranger where her life changes forever. After few years when she meets her family she is shown as a protector of people.

The shade of woman portrayed here shows the breaking of chrysalis and emergence of a new form. In this Kamala breaks the chrysalis of her old timid self to emerge as a brave protector of people. This story shows that women can achieve greatness when encouraged and supported. They grow stronger than men with time and experience.

Other female characters from Rabindranath Tagore’s works that portray different emotions are  Ratan from The Postmaster, Charulata from A broken nest, Mrinmoyee from Sampati,  Binodin from, Chokher Bali, Suman from Tyaag to name a few. In many works of Rabindranath Tagore the women are portrayed with strong emotions, they may be positive or negative, active or passive, but the impact they create on readers mind is great. Tagore created his characters based on the contemporary situation. The women are portrayed as traditional, forward-thinking, strong-willed and self-dependent. The women in his stories can be seen questioning the contemporary issues of that time.  From child marriage to gender inequality, all such issues are dealt in his works.

Through these stories Rabindranath Tagore brings out different shades of a woman’s personality, in some, she plays the hero, in some, she plays the victim, in some she plays the antagonist.  On the whole, he brings out the idea of understanding and empowering women. Human nature is ever changing and these shades not only apply to women but also men. All the qualities of life are brought out in Gurudev’s writings. In many of his writings, he subtly or loudly gives out strong messages to the society. The treasure trove of Rabindranath Tagore’s writings is huge; reading at least few of his works would give a person the vivid shades of his Imagination.