[VoxSpace Life] The Paintings Of Ganesh Pyne: The Surrealistic Amalgam Of The Sublime And The Grotesque 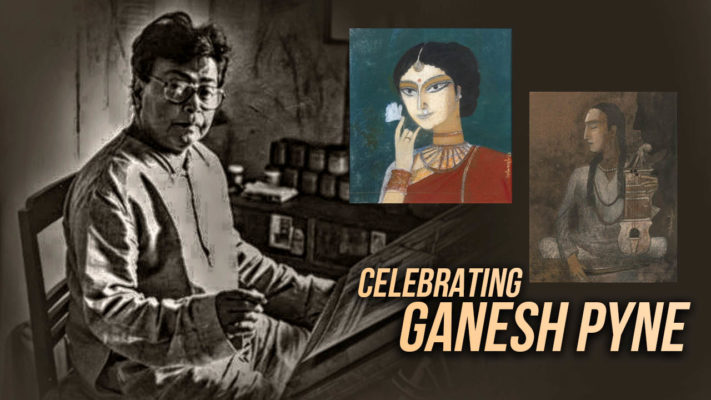 From Tragedy To Art

At a time when Tyeb Mehta, Francis Souza and SH Raza were ruling the world of art in India and beyond, famous painter M.F. Hussain described a certain 37-year-old Ganesh Pyne as the foremost painter of India. Regarded as a “master fantasist” by art enthusiasts across the globe, Ganesh Pyne’s style of art revolved around the macabre, taking inspirations from real-life tragedies to the intrinsic pathos of human lives. A graduate from the prestigious Government College of Art and Craft, Pyne is one of the most notable contemporary artists of the much revered Bengal School of Art, whose eminent proponents were the likes of Abanindranath Tagore, Gaganendranath Tagore, Jamini Roy and the likes. 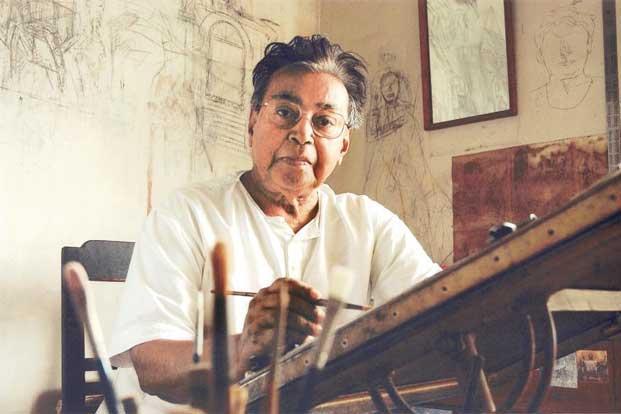 Like most of the graduates of the Government Art College and Craft, Pyne commenced his tryst in the world of art as a book illustrator and went on to become an illustrator for animation films at Kolkata’s Mandan Mullick’s studio. And, thus was born a great artist who is still regarded as one of the major masters of Indian art.

While reading into the art of Ganesh Pyne, one may envisage in him the same sensitivity that Vincent, the title character in Tim Burton’s short film ‘Vincent’ (1982), had. Just like the five-year-old Vincent, Ganesh Pyne was also drawn towards the macabre and the darker territories of human life from an early age. Of course, Pyne had had his share of dark days that transpired in his works as an incessant imagery of his art.

Pyne, as a child, would spend a lot of time with his grandmother, listening to the Bengali folklore. Those tales from his grandmother became a world of its own, to the imaginative child that Pyne was. The kings in all their armours, the mystical world bordered in the casual violence of Suorani and Duorani, and the delicious macabre of byangoma and byangomi entwined around the imaginative power of Pyne, making him fall in love with the fantasies and mysticism for all his life.

However, the imagery of fantasy is not the sole one to be perceived in his art. At the tender age of nine, a year after his father’s death, Pyne experienced one of the darkest periods in the history of Bengal – the partition. His repeated affinity towards death in his art can be accredited to this dreadful period, which haunted the young boy throughout his life. From being bred in a comfortable central Kolkata family mansion to spending days at refugee camps during the riots, the fantasies of his childhood stories suddenly spilled out of all their realism. Then there was the Bengal famine of 1943, which also shaped the thoughts of this young lad once and forever.

A little after his death, Prakash Kejriwal, who is one of the earliest collector’s of Pyne’s art and the owner of Kolkata’s Chitrakoot Art Gallery, described his work as “something between life and death…the twilight zone.” And perhaps this is the perfect way one can describe Pyne’s art – one that amalgamates the fantastic with the grotesque, and the sublime and the macabre.

Ganesh Pyne And His Repeated Imagery Of Death

As a person, who witnessed corpses, gore and apathy at a tender age of his life, Pyne could never detach himself from the trope of death throughout his life. One may find an inversion of symbols throughout his works – a temple transforming itself into a tomb, while kirtaniyas’ sarinda gets transformed into a skull. There is also an intrinsic fascination with skeletons of different life forms that can be visualized in his art, even as they protrude their incisors and canine deviously. In his art, everyone is a fighter and a survivor, trying hard to cope with the worldly woes.

If one goes through the art of Pyne in their entirety, s/he will be able to sense life as a mere illusion – for death is always the overpowering idea. In one of his paintings, The Night of the Merchant, a lone merchant finds his own shadow to be of death, while in his ‘The Fisherman’, he portrays a fisherman who is caught in the web of his own net. The symbols are frightening and nihilistic – it reminds us of the imminent truth of life – death.

As an inheritor of the Bengal School legacy and a student of the Government College of Arts, Pyne started out using watercolour. He produced some fine works using the medium’s limpid quality. He was one of the first artists of that time to have experimented with all types of prevalent mediums – watercolour, pastel, gouache, and oil painting – before settling with tempera on canvas. To disseminate the underlying pathos and sadness in his art, Pyne generally used a light and subdued palette that was majorly overpowered by beige and inflicted browns, with startling use of deep bloody hues and dense blues that precariously insinuated the sinister and predicted the imminent doom.

In Construing The Reality, He Drew Inspiration From Literature And Films From Across The World

Pyne’s obsession with dark subjects, which deals with the deep recesses of the human mind, have been inspired by not just the stark reality of the war that he had experienced in his childhood but also the literature and films of the day. He drew immense inspiration from the themes of classic films of Ingmar Bergman and Fellini. He was particularly moved by the dark imagery steeped in Bergman’s ‘The Seventh Seal’ and Fellini’s ‘La Dolce Vita’ – the imagery of death lurking even in the fullness of one’s life.

Looking at Pyne’s body of work, it won’t be too obscure to say that the master painter was also inspired by Baudelaire’s ‘Les Fleurs Du Mal’ or ‘The Flowers of Evil’, a collection of symbolist poems that dealt with the paralysis of modern lives and, for the first time, showcased the drudgery and seamier aspects of Paris in spite of hailing Paris as the abode of love and beauty.

Then there was Rabindranath Tagore, whose shadowy, fantastic creation with a hint of macabre immersed in an all-pervasive mystery and inexplicable melancholy inspired the young Pyne immensely. A hint of the same can be sensed in the twilight images of Pyne.

Pyne has been termed as the master of “poetic surrealism” in Wikipedia. True enough, his art of nurturing a poem in his mind for years before materializing them through colours has indeed been an intrinsic capability of Pyne. As a result of this, one may find many of his art to have been inspired by the poems of Jibananda Das, a wordsmith who painted vivid images through his poems. And it is the same way that Shakti Chattopadhyay’s ‘Ami Swecchachari’ inspired one of Pyne’s most credible works, ‘Harbour’.

Ganesh Pyne was a recluse in the world of modern Indian artist. His obsession with the haunting dirge and nihilism never quite attuned itself to the main theme of contemporary Indian art. He has always been an embodiment of adversaries – a dreamer who never chucked out the existential realities of life, and a minstrel who juxtaposed the grotesque and the sublime in his fables.