Kalki Koechlin – Why She Remains To Be My Biggest Crush #Always 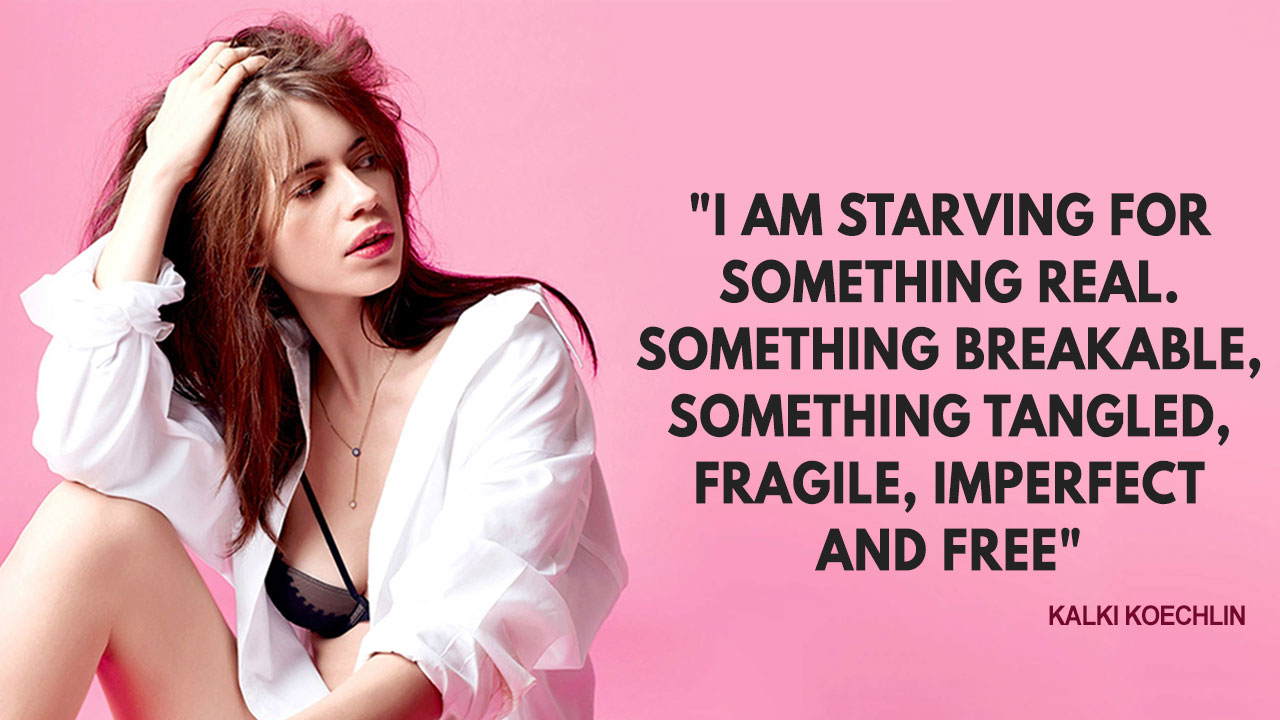 Bhai voh foreigner ladki Dev D vali?  Is what many of my friends would say as soon as I take the name of Kalki Koechlin.  Of course, they are partly right taking a drop at their memory anchor of Kalki’s vulnerable, rebellious and earthly portrayal of Chandramukhi in DevD. As for myself, my harmless virtual stalking of Kalki would traverse through her other unforgettable projects as well. Be it the dazed troubled girl in Shaitan, or the spunky and strong daughter on a mission in A Girl In The Yellow Boots, to the recent suave yet imploding role of a doting wife in The Waiting, Kalki grew from strength to strength. And perhaps, that’s why at a career span of about 7 to 8 years, and at the age of just 32, she has become one of the greatest assets to the Indian cinema. As someone somewhere said, “Kalki is a thinking man’s Deepika.” Hence, it was imperative that I write about her and list out things that I absolutely and unequivocally love about her. And of course why she remains to be my greatest crush:

Kalki And Her Unconventional Aura:

The foreigner ladki, so to speak, is actually of a French decent. Fun fact: She is a descendant of Maurice Koechlin, a French structural engineer, who played a major role in the design and construction of the Eiffel Tower. Yup. Carrying on, she is a multilinguist who can speak about five languages. Also, did you know Kalki is more proficient in Tamil than Hindi? And of course, when you are someone who can practically converse with people from any part of the country, you surge miles ahead in your desirability factor. That apart, there’s a beguiling Aura about her which is very hard to escape from. Perhaps, some literary student will do a 1000 page thesis on ‘Kalki and her Why About’ and throw some light on why she has that strange, captivating  presence about her. It’s unnervingly poetic. From what I can understand, the self-made woman, (who gives not a single damn to what the world thinks about her and never affirms to any stereotype at all), that she is, there is an undertone of melancholy about her which perhaps defines her. Much like Da Vinci’s Monalisa. But that’s just the poet in me trying to weave an alluring tale about Kalki. To the brainiac in me, she’s a whole lot more.

Kalki Koechlin And Her Dark Roles:

One looks at her repertoire of work, and you know why she is considered one of the biggest talents we have. Perhaps, it was her unconventional looks that restricted her from going the commercial way. But then, who the heck is complaining. That’s how destiny plays out right? It would have been an upending disaster if she took the mainstream route. Thankfully for us, she chose to do movies like Shanghai, Margarita With A Straw, Ek Thi Daayan, Waiting and the upcoming A Death In The Gunj, which redefined the fabric of Indian cinema. Her accolades, of course, don’t just lay pretty in the movie circuit. She’s an assertive force at the Indian theater scene, as well. Her highly acclaimed plays include – Skeleton Woman, Color Blind ( based on Rabindranath Tagore’s material ), What’s Done Is Done, which have been lauded by the critics and audience over the years.

Kalki And Her Acclamation:

If you aren’t in love with her yet? Let us help you with the following facts about Kalki which will melt your heart instantly:

Seriously man, if you aren’t in awe of Kalki right now, there’s something seriously wrong with you. I could go on and do a book on her, but then hey, we do what we can.

Here’s wishing her a more fantastic journey ahead. Kalki Koechlin, you rock..!!