[VoxSpace Life] Kalki Subramaniam : The Powerful Story Of A Superwoman 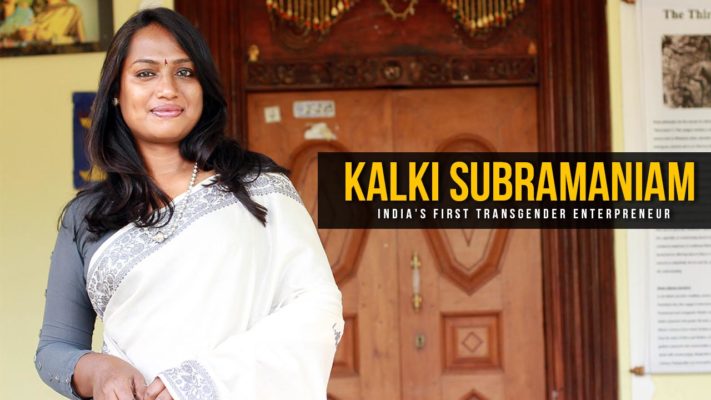 The Social Place Of The Transgender Community

Marginalization is a behavioural part of our society that it simply does not seem to be able to do away with. In the societal context, marginalization demonstrates the systematic exclusion of communities or individuals from their rights, opportunities and resources. The transgender community is one such community that has been the victim of incessant marginalization since history can remember. Following the law of nature, in the face of such desperate times of extreme violence, intolerance and discrimination against the transgender community, many have emerged and risen up to the occasion in support of the transgender community. Gloria Steinem once said, “I believe that transgender people…are living out real, authentic lives. Those lives should be celebrated, not questioned.” One such life into which Steinem’s statement perfectly fits into is Kalki Subramaniam, a transgender activist, entrepreneur, actor and artist. Born into a middle-class Indian family in the small town of Pollachi of Tamil Nadu, Kalki has broken all her barriers limited not just within the nation, but worldwide.

Moving Against The Current, Kalki Subramaniam Stands Out Undaunted

Kalki says, “I am not a woman, I am a superwoman…A woman to me should be powerful and strong, mentally and physically. Right from my childhood, that is how I perceived femininity. That is how I longed to be.”

Success and recognition do not come easily, especially if one belongs to the marginalized community of the society. Beginning in her childhood, Kalki Subramaniam has fought her way to the top. Her life, her childhood was never easy –certainly not as easy as the child who is perceived as “normal” or “natural” by the society. It has always been a fight –a fight with herself, a fight with her family, a fight with the society. As a child, Kalki had always wished to be a girl. Wearing dresses and skirts brought her joy. While playing with her sisters, she would pretend to be a woman.

Kalki’s staggering struggle with the society and the world began at the age of 13 when her mother discovered her through the poems she had written conveying her feminine feelings. She was sent to a boys’ school for higher school education where she was constantly ridiculed and mocked, not just by her fellow schoolmates, but by the teachers as well. During this period, she found her solace and mother-figure in Apsara, a victim of transgender intolerance and discrimination. It was through Apsara, that Kalki got accepted into and among the transgender family at a very young age. Unlike the unfortunate lives of most transgender people in India, Kalki’s fate never left her side. After years of patience and hard work, Kalki was gradually accepted back into her biological family. During the years of her higher education, she went through a quiet transition. After the completion of her education, a decent job in a multinational company as media specialist earned her the financial support for her final transition step –laser treatment for hair removal and Gender Reassignment Surgery.

A Head Held High Against All Odds

Kalki Subramaniam’s war with herself, her family and the world regarding her sexual identity have not been in vain. She has stood up to the social stigma and intolerance for her people through her poetry, her activism and her other influential works. She has taken up and is still fighting an incessant battle for the rights and equality of the transgender people. During her Master’s education in the Madurai Kamaraj University, she started her monthly Tamil magazine, Sahodari (meaning “sister”), that voiced the interests, needs and rights of the transgender community to the world. A few years later, Kalki quit her job at the multinational company to start her organization by the same name of her magazine –Sahodari. Sahodari, the organization advocates for the social, economic and judicial rights of not just the transgenders, but the whole LGBTQ community.

The members of the organization fight against every kind of injustice, oppression and violence. The members had even engaged in a non-violent protest against the genocide and war in Sri Lanka in 2008. As Kalki states, “I always believe that transwomen are powerful and should protest against injustice wherever it exists.” Kalki’s struggle and sacrifices have brought fruitful results for her people in her state. The Tamil Nadu state government has introduced the Transgender Welfare Board, the first initiative in India of its type. The government has ensured that there remains a special category for transgender women in educational institutions. The transgender community in Tamil Nadu has been given access to the free housing, along with a special board of doctors for Sex Reassignment Surgery.

What You Think, Is What You Are

Kalki Subramaniam once said, “If you dream and if you believe in yourself, anything is possible.” Born as a boy, when Kalki would dream of becoming a woman and of turning the world towards her, little did she know that the whole world would be at her feet one day. Riding against the current, Kalki has broken societal and gender barriers in every possible field. She is now a renowned inspirational speaker worldwide. Known to emerge against the tide, Kalki is often invited to speak at various prestigious institutions over the world including the United Church of Christ located at Simi Valley, University of California LGBT Education Resource Centre and Satrang, an LGBT organization in South Asia. True to her dreams, the bold Kalki has been able to give a voice to her aspirations for her people before the entire world.

She has brought upfront the interests and the needs of the transgender community to be accepted into every walk of life as normal human beings. Recently, in 2017, she was invited to speak at the Harvard Business School alongside many other eminent personalities. Kalki’s standing ovation winning speech at Harvard advocated her desires to see a world that is free of discrimination and intolerance at every level, a world that celebrates womanhood, a world that is free from “homophobia” and “transphobia”. Kalki’s dream of the transgender community enjoying an “inclusive” position in the society is yet to be completely realized, but she has come a long way and still has miles to go.

Related posts:
[VoxSpace Life] Sonagachi : Inside The Lanes Of Asia’s Biggest Red Light Area
[VoxSpace Life] Earth Overshoot Day : Today We Have Consumed More Resources Than Earth Can Produce
Why The IPL Trophy Has Always Been Elusive To A Star Powered Team Like Royal Challengers Bangalore (...