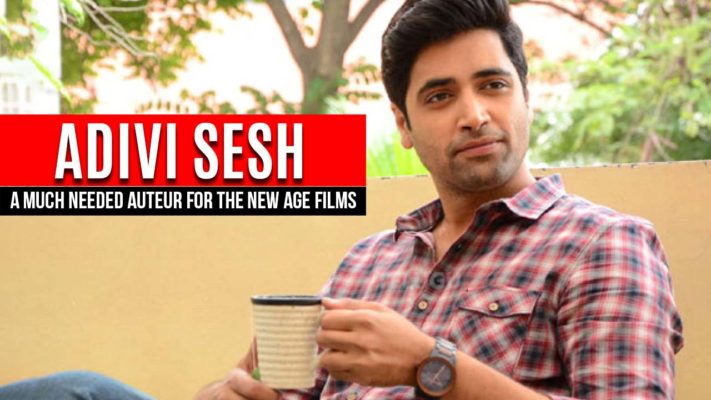 Yeah you got it. We waited till ‘Evaru’ became a certified industry hit, and then decided to write a testimony for Adivi Sesh, or Sesh as he is called by the poster of films he is associated with. When we say testimony, more often than not, it is assumed that we are referring to a career which is at a fading end. Like the proverbial life time achievement award. Let me assure you that this testimony is not at all about a memory of good times, but of good and rewarding times right here, right now. It is for all intents and purposes, about a creative force – Adivi Sesh – who is ushering the Telugu film industry, presently, into unexplored and yet highly satisfying grounds of creative satiation.

‘Evaru’ marks Adivi Sesh’s third consecutive success at the box office, following his highly acclaimed ‘Kshanam’ and his spy thriller ‘Goodachari’. The trium of these movies, establish beyond discussion the acumen of Sesh in authoring comprehensively thawed roles for himself while at the same time ensuring a qualitative product to be build which centrifugally revolves around an exciting premise in itself. One could be tempted to say that his roles prior to this trium of movies, have been meagerly thought out in terms of commercial appeal and as critical appeasement. Perhaps it all takes a ‘Kshanam’ (second) to change everything.

The Tryst With A Talent -- The Kalki Comes…

Adivi Sesh, as I remember him from his first movie, ‘Karma’ was this chic looking NRI guy, who literally played a God in his first film. ‘Karma’ a well-made socio-fantasy, had Sesh playing Lord Vishnu’s modern age avatar ‘Kalki’, out to save the female lead who is symbolic of Durga. In a shot which comes during the climax (an ambitious in thought, restricted in budget, fare) Sesh depicts ‘Kalki’ true to the word, as he rides a white horse and wields a sword banishing evil of all forms. It seemed that the quintessential NRI, was trying strongly to survive the Indian mythos in a western landscape. The effort as it seemed, was both strong willed and yet sympathetic in all aspects. It was curious to see what this NRI could do, as his promise of writing the story, and enacting it out showed immense potential. And no, I’m not citizen-shaming him in any manner whatsoever. I vividly remember that he was tagged and referred to as ‘The NRI’ Hero by filmmakers and general audience as well at that time. It is a testimony to Sesh’s grit, that he turned the very tag which categorized him, into something that made him stand apart from his peers and meet success because of his worldly view of things.

All things apart, I’ve never seen an actor who has turned his brand around with such grace and elan, as Sesh has. For any other actor, what followed ‘Karma’ would have ended his career, then and there. But not Sesh. On the topic, ‘Karma’ was succeeded by another of his auteur venture by name, Kiss. A forgetful venture like that, didn’t contribute much in pushing Sesh’s career forward. In the meantime, he appeared in multiple movies, like Panjaa ( an excellent role of hot headed brat) and Balupu (not even the makers remember that one), which ensured that he was getting ample screen time and more importantly first hand experience with film making aspects, specifically acting.

Kshanam and Goodachari -- The Thriller Miller Is Here…

Although Sesh Adivi landed his career’s biggest project till date, ‘Bahubali : The Beginning’, it just seemed like a resume building exercise at best. Watching him, in Bahubali, five years after ‘Karma’ gave me a satisfactory smile. The raw jawed NRI, was still hanging around, you see.! I was left wondering -- as I often do when I see exciting and progressive talent on the cusp of exciting projects -- whether they could really make the cut. Would they step forward into the light and re-tweak the sensibilities of an already established mechanism of films in the country? Adivi Sesh did arrive with an answer, as if a tight slap to all those who tagged and branded him to be a flash in the pan. He thumped his chest and showed up with ‘Kshanam’, both as a formidable writer and as a versatile actor as well. ‘Kshanam’ was Sesh’s ‘Bahubali’. He was not presenting the resume anymore. He was the resume now!

‘Kshanam’ became one of the biggest success stories of 2016. It did what every great movie should do. It ushered an essential re-engineering of thought processes, marked towards slick and sensibly made thrillers. Often times, the industry closes its doors on genre films, simply because there are not enough sensible minds actually doing it. And this phenomenon is usually blamed upon the audience, quoted to be non-accepting for certain genre films. Sesh proved with a Godzilla roar, that audience are intelligent enough to grasp your stories. Sesh respected the audience, while others talked down to them. And to me, that is the biggest contribution, Sesh’s trium – Kshanam followed by Goodachari and now Evaru – managed to do. The NRI of ‘Non-Resident Indian’ came around to stand for ‘Never Reject Intelligence’.

The Writer-Actor Life And Career…

The ‘Karma’ boy has indeed come a long way. Today, Sesh enjoys the luxury of bringing his own stories to screen with, one would hope, minimal friction. When is the last time that we’ve seen, such perfect culmination of talents, of writing and acting, beaming through a single creative personality in our industry? Yes, there’s the odd Kamal Hassan (an auteur who makes films majorly for himself) or Phoebe Waller-Bridge (for Fleabag, watch it or forever remain ignorant), Seth Rogen (for SuperBad), Ben Affleck (ergo Argo), Jason Bateman (for Ozark) or the iconic Sylvester Stallone (for Rocky and Rambo franchises). But then, in TFI, we now have Sesh Adivi, and we should be fucking grateful for that.

You see, it takes immense talent to act, but it is a whole new dimension when you have to both write and act, whilst keeping the sensibilities to be as progressive and impacting as him. And thus, driving a culmination of art forms into a singular seamlessly undeniable force to effectively tell a story, with minimum corruption, if at all. The future looks super exciting, with Sesh signed up to play Major Sandeep Unnikrishnan in ‘Major’ which he is bearing the scripting responsibilities for as well. He is the future of filmmaking, and therefore it is high time we accept that. With OTT’s and streaming apps now encouraging singular creative forces, we can’t wait to see what Sesh brings to these platforms. With a brimming knowledge of worldwide fictions, an awareness of multinational sensibilities, and an acute understanding of community acceptance, Adivi Sesh now stands at a precipice of the modern age of storytelling. Here’s hoping all good things from his talents!!