[VoxSpace Life] Devadasis System : How Marriages To God Lead To A Culture Of Courtesans In South India 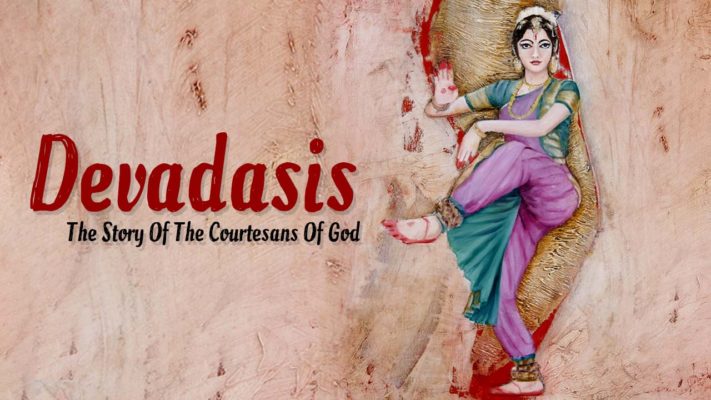 In a survey conducted by the Karnataka Women and Child Development department back in 1993-94, it was discovered that there were 22,873 Devaradiyar or “Servant of Gods” or “Prostitute of Gods” or Devadasis in southern India. The numbers swelled in 2007 when a re-survey of the same was ordered, now it stood at 30,000. As per an article by TOI, a census report by the Karnataka State Women Development showed that the state now housed 9,733 devadasis. Why is this important? Well, as per the “law,” the practice of devadasis had been made illegal via The Karnataka Devadasis (Prohibition Of Dedication) Act, 1982.  Oddly enough, a practice that’s illegal seems to be more or less unfazed over the years. There is an underlying problem, a deep-rooted malice that needs to be talked about because this evil has festered too long under the veiled protection of religion and needs to be uprooted with force and perhaps with a little bit of tact.

From Being Patronages Of Art To Becoming Prostitutes

Well, although there have been several controversies, documentaries, discussions, debates over the subject and a universal agreement that the practice of devdasis is condemnable; it is, perhaps, not so simple, as the problem lies in history and also in the socio-economic structure of India. When you look at the very pure traditional context of Devaradiyar, they are not labelled as “prostitutes” but are treated as conduits of art. They were recipients of patronage, munificent favours by kings and were highly venerated. Even now, efforts are being made to preserve a categorised dance form called Vilasini Natyam, a dance that is performed by devdasis in front of the royal court. There several names for what the devadasis brought to the world when it came to dance forms – Kootu, Cinna Melam, Sadir, Dasi-attam and yes, the wider known Bharatanatyam.

From there, we now jump to the part, where, as recent as, last year the NHRC had to reprimand local authorities and call them to action when it came to light that at the Goddess Mathamma temple in Tiruvallur district of Tamil Nadu, girls were being paraded as brides and were then stripped naked by boys, and the future for these girls was to stay in the temple and become public property. From venerated to debased, how is this entire journey mapped through?

Misuse Of Practices By The Corrupt

Well, for starters it begins with the root of all troubles, religion in the hands of the corrupt. As time passed by, the kings ceased to exist and in the colonial rule the practice of devdasis, although banned as amoral, was backed by local miscreants, who saw this as an attack on their religion. Almost as a middle finger to the colonial masters, who tried to meddle in the ways of the people, an act of defiance, if you will, to the status quo established by the “firangs”. However, without the patronage and lack of culture, this became a method of exploitation, a ritual that lost its sanctity and became a mode of oppression and sexual exploitation. Over the years post independence; this became a circle that is not ebbing away no matter how much pressure is given to abolishing it by the authorities.

As crude as it may sound, religion has always been a method of oppressing those that are vulnerable. Now, women get picked from the distant regions, predominantly belonging from Dalit families whose financial conditions are in disarray. The families know that they are giving their young daughters to prostitution, but they are taking solace in holding on to the higher sheen of it that their daughters are becoming “devdasis,” a hold on to the past glory and ignoring the present. Also for those exploiting it, it becomes a smoother way to rationalise prostitution if you bring religion into it. Religion, as they say, has been the opiate of the masses and here it is no different. It thrives and preys on those, who are socially and financially challenged because they have no means of retaliating or refusing the advances made by the so-called “superior” priests or pimps that come with the promises that this is for a higher cause.

Exploitation In The Name Of God

The names given are varied Mathangi in Maharashtra, Jogini or Mathamma in Andhra Pradesh and Telangana region, and finally, Devadasi in Karnataka. But they all point to the same old problem, Dalit exploitation. The exploitation of the downtrodden by those who are superior to them and them being silenced through oppression in the name of religion, in the name of God they become playthings of people.

The law is there, however, the implementation of it is flimsy, because people who live in the rural regions do not look at it as a heinous practice, they are still stuck to the old ways of religion and their economic status coerces them to let it go on as most of the times, it means one less mouth to feed and sometimes some material gain. The moral element is immediately stifled because their daughters are offerings to Goddess Yellamma also known as Renuka, Jogamma and Holiyamma.

In the Gender-based Violence on Scheduled Caste Girls: A Rapid Assessment of the Devadasi Practice In India by Sampark, a girl that was forced into becoming a Devdasi recounts, “When I was 12 years old my mother along with a Jogini and other neighbours visited Saundati Yellamma temple. I was given a set of new clothes and the women who had come with me were performing rituals around me. The police arrived at the temple. The people around me quickly covered all the things used in the rituals. They all sat in a group and started singing songs and bhajans loudly. The police approached the group and inquired about the occasion. Everyone pretended as if it was a routine pooja. The police went around the temple and stayed put at the temple, observing the group closely for an hour. After the police left the ladies called me back. I had run away from the scene when the police arrived. The women caught hold of me and forcefully sat me down on the kabala (blanket). The pujari of the temple came and tied the Pearl necklace (Mutthinahara) around my neck. I knew I was dedicated to being a devadasi”.

Most of them get raped, or otherwise sexually exploited at an age of as early as twelve. They face the risk of getting HIV/AIDs from having to sleep with multiple partners, they don’t have assets, the government doesn’t take an active interest in their welfare and at the end, they get engulfed into a society that carries on this feudal exercise over and over again.