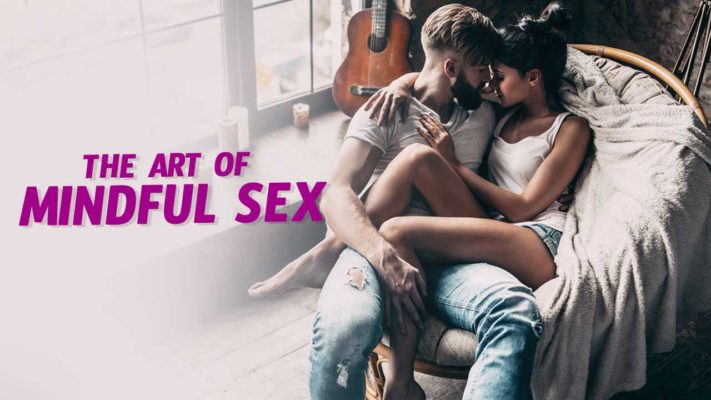 The regenerative powers associated with sex predate to the ancient times, where scriptures and sacred texts have often shed light on this area. India, especially, has been benevolent enough to provide an aesthetic and erotic depiction of sex through art and literature, an altogether different angle to it. It has been around 15 years that Paulo Coelho has written “Love is not to be found in someone else but in ourselves; we simply awaken it. But in order to do that, we need the other person…” well, these are more than just fancy words taken out from a book that focuses on sex and its meditative powers.  Mindful sex, as has been found in studies, is the key to achieve a deep sense of unity of the mind and body.

A recent study has claimed that sex has abundant healing properties, provided one is investing their utmost concentration and calm into it, even in the minor acts that can be crucial in enhancing your spiritual connection. You see, the feeling of disorientation or a sense of dissociation that arises in many people who are participating in the act does not help in the restoration of the mind and the body. It is almost primitive in modern times, where immediate gratification of urges has bestowed upon the generation a sense of urgency and haste.

In case one is trying for quite some time to surrender to the euphoric sensations associated with sex, it is unattainable unless one is investing the self in its entirety, into the act. Mindful sex is all about registering every stroke of touch and feeling it ardently, the zenith of being alive to every sensation instead of stressing about work, brooding over one issue or the other or watching that phone blinking in dark. Since orgasm is the collective involvement of the soul, body and mind, one should be acutely conscious of the sensations or experiences the body is going through. So before questioning how many times one is having sex, the question should be whether it is been done right!

Sensate Focus, For Your Nerves

As per the report, two American researchers, William Masters and Virginia Johnson, one should adhere to the tenets of sensate focus, which dictate that each partner should be more keen on feeling the touches. Instead of getting trapped inside the body, as the mind meanders off to other things, the couple should bring mutual responsibility into the equation to ensure that reaching the climax is not given colossal importance and in the process turning sex into a more mechanical activity.

In 2004, The Telegraph published quite a daunting piece of the article regarding sexual gratification and as far as reports are concerned women can achieve the highest level of satisfaction due to their brain stimulation.  The brain is now considered an indispensable agent in securing pleasure out of sex, and utmost concentration would implore one into a tranquil state of mind, thereby improving relationships, health and the sex life. It is almost like meditation, where attaining nirvana is impossible without setting your mind free from leftovers of every day’s drudgeries. The spiritual connection and metaphorical transportation of your mind beyond the immediate physical surroundings or pondering how the partner is perceiving your body, harnessing sexual energy in a meditative manner is considered our remedy for the 21st-century spiritual crisis.

The Curious Wonders Of Mindful Sex In Your Daily Life

Diana Richardson, the Europe based famous author of Tantric Sex for Men, is a firm believer of mindful sex and in case you are still baffled regarding the intricacies or necessities of the same, her talks are available on YouTube. It is relevant to mention this context, Japan has ranked the lowest in sexual satisfaction rate. This is partially due to issues in receiving sexual satisfaction as the partner(s) is/are hardly receptive to the touches and caresses. Researchers have opined that this feeling of disjointedness has further aggravated barrenness within individuals, where increased virtual communication has ironically damaged the possibilities of strengthening a bond with own bodies. It is apparent in adults and teens alike, perhaps more prevalent at an abnormal rate in a century where multi-tasking is a pre-requisite almost in every sphere.

Kate Moyle, a renowned therapist, opines that mindful sex should be considered nothing short of therapy. Similarly, like therapy itself, this needs dedication and a degree of impurity. One cannot rush to it overnight. It might seem like a tough job, or to some extent rigid, but over time one should be able to smooth out the creases.