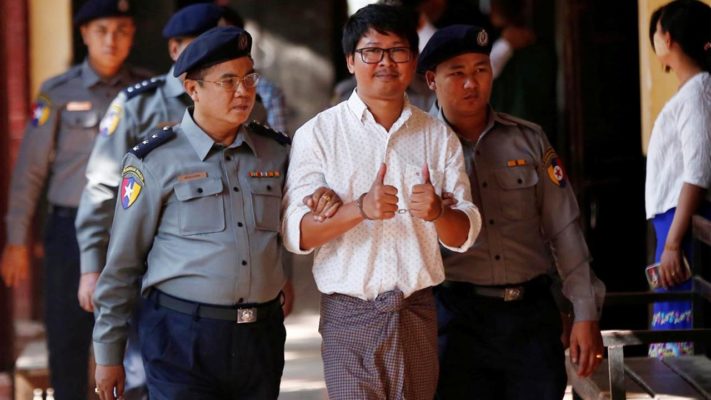 Myanmar is in news and not for the right reasons, again. Two Reuters journalists, namely Wa Lone and Kyaw Soe Oo have been sentenced to seven years in prison, for breaching the Official Secrets Act in regard to covering the Rohingya issue in the country. The world has been looking on to the verdict of this landmark case, which gives out many implications on how conscious the government is about the test of democracy in Myanmar.  The journalist pair were originally arrested in last December under this act introduced by the British in 1923 and has been in custody for the last nine months without even a chance to see their family.

Myanmar government and their de facto leader Aung San Suu Kyi were not holding up a good image for the last many months because of the ongoing Rohingya issues there. More than 700,000 Rohingya Muslims, an ethnical minority in Myanmar, were forced to flee the country and Suu Kyi had been trying to defend this “ethnical cleansing”, as described by the UN. Both Lone and Soe Oo had been working on this issue, collecting evidence about the murder of 10 Rohingya men by the army in Rakhine village. Stories about the army violence in this village have been condemned by international media and human rights organizations. Many have been reported to be murdered, assaulted, raped, enslaved and persecuted.

Both the journalists were kept in Yangon’s Insein Prison, the colonial-era architecture to lock up political prisoners where ironically Aung San Suu Kyi herself was jailed for a brief period.

Judge Ye Lwin, while reading out the verdict, said the pair “did not behave like ‘normal’ journalists.” They have been charged with intentionally giving out information to the enemies of the nation. The journalists have been reported saying that the documents were handed over to them by a policeman and were arrested by a different set of police officials at the same spot. A police witness has testified this restaurant meeting was a set-up trap to arrest them.

The two journalists pleaded not guilty and commented that they are not surprised by the verdict. “What I want to say to the government is: you can put us in jail, but do not close the eyes and ears of the people,” said Kyaw.

Reuters editor-in-chief clarified that they stand by the reporters and the investigation. Commenting on the court verdict, he termed it as a “major step backwards” for the country.

The UN Human Rights Chief Michelle Bachelet called for the immediate and unconditional release of the two men. The court ruling has drawn condemn from many other human rights organizations, international media, governments, civil societies in Myanmar and social media. Myanmar government spokesperson or any other officials have refused to comment upon the incident.