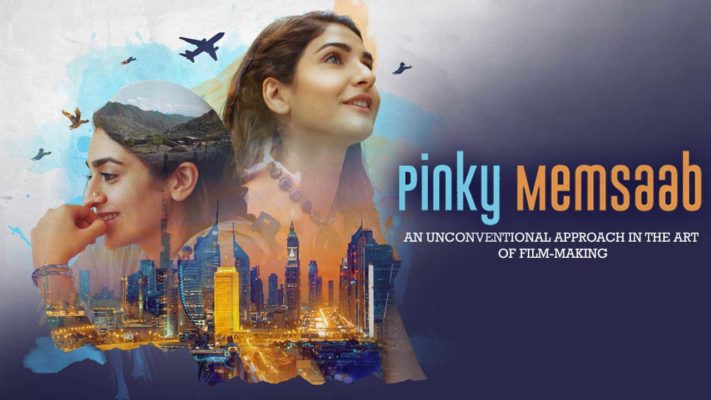 The Quest For The Self Is Adequately Represented In Pinky Memsaab

Shazia Ali Khan’s Pinky Memsaab marks the cultural transition of Pakistani cinema that had its Golden Era from late 1950 to 1970 before it declined in the 80s during the terror regime of General Zia ul Haq. Recently, some of the coming-of-age films in Pakistan, that fetched mixed reaction from the audience, made apparent the ostensible influence of raunchy comedy and other aspects of pop culture on Lollywood.

The present scenario of filmmaking in Pakistan can be characterized by the revived hunger for portraying well-conceived characters, plots and scripting new stories- conscious of their cultural heritage at the backdrop of which they are made to come alive is apparent.

This intense desire to come up with diverse stories appealing in International film festivals is put forward deftly in one line by actress Hajra Yamin who believes “There are no leading characters in any film. There are only strong characters.”

Shazia Ali Khan is one of the directors who has mastered the skill of nuanced storytelling through the medium of cinema that would bring back the erstwhile vigour of cinema that lasted in the days of Waheed Murad or Roohi Bano.

Pinky Memsaab with a power-packed cast of Hajra Yamin and Sunny Hinduja, is proud to announce its release worldwide on 7th December. It is quite a deliverance of Lollywood from authoritarian dictates- films were hardly allowed to come out of the womb without being truncated with heavy censorship. Shazia’s second venture, Pinky Memsaab is woman-centric and a queer juxtaposition of different cultures as Shazia pens it.

“We were just a bunch of people who love cinema and love to experiment with different genres, but that’s not something that really happens in Pakistani cinema, so it was really hard to attract investors.”- she stated in an interview with Arts & Culture.

The Sheer Brilliance That The Trailer Is!

The first thing that would mesmerize you when watching the rest of the trailer is the compact sequence of events, each scene followed by the next, powered by the charming vivacity of its actors. Wide-eyed, naïve, and young, Yamin is an altogether different avatar herself, a maid in the big city Dubai. As Sylvia Plath has put it, she wanted to be everything.

The shift from rural Pakistan to the cityscape of lean, towering skyscrapers of Dubai embellishing the background, the trailer would keep you engrossed for 2.16 minutes. Sunny Hinduja of Shaapit (2010) fame, the one who plays the bearded taxi driver, has this broad grin on his face- it at once exposes the seduction and subsequent perils of a big city on a character untarnished by gall.

My personal favourite is the aesthetic beauty of Pinky Memsaab which is conspicuous even to a layman’s eyes right from the start of its trailer. The soulful khwab Jaee composed by Zohaib Ali Pinkoo is the cherry on top.

Pinky Memsaab is the commingling of Urdu, English, and Hindi which ensures a degree of universality and in the process investigates the cultural impact of Dubai on a woman. Dubai catapults this small town maid into making important choices for herself. Yamin weaves magic into each and every scene, be it in pronouncing “do” as “dyoo” with curious kohl-lined eyes, milking the cow or taking strides in a long pink overcoat. At the heart of this story lurks another world, a dark mystery that will be unfurled in theatres after its release.

Shazia Ali had a low budget and unique story rich in aesthetics with minimum extravagances to offer her audiences. She debuted as a director in 2006 with ‘News from Heaven’ and since then has put a lot of hard work to improve herself as a director.

Through the trailer of Pinky Memsaab we see her thirst to incorporate an unconventional approach in the art of film-making, an approach hitherto unused in Lollywood. So proud to see a film pivoted on women’s characters, with a plot that promises to take a kaleidoscopic view of people’s lives trapped in the land of glamour and extravagance. Lollywood is coming out from the tattered garbs of overused formulas. An industry fragile and unformed, which once saw its actors fleeing to Bombay. “We were in a state of coma for the last 30 years, and we’ve just opened our eyes” -Jamshed Mahmood in an interview to Dawn.

As cinephiles, we want more of Pakistan to get her due share on screen- the unveiling of her practices, culture and lives that she nurtures on her soil; a colourful hue and exposure in celluloid that would shake the industry out of its comatose.