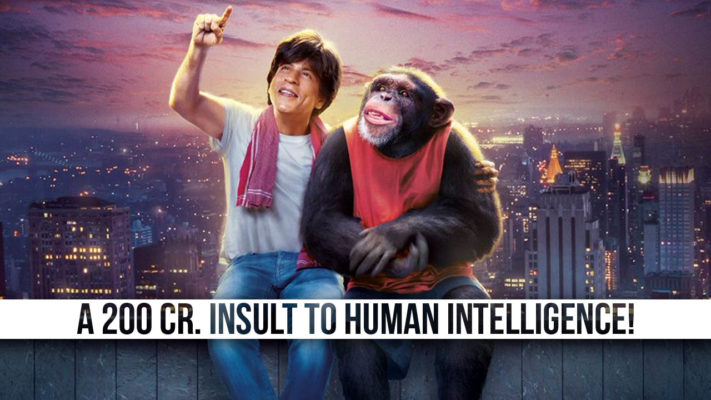 In a scene in Shah Rukh Khan’s Zero, a chimpanzee walks up to Shah Rukh Khan and gives him a tight hug. The poor creature must have read the script of the film!

The film assumes you have the intelligence of a primate and goes about its business in such a primitive manner, I wouldn’t be surprised if it makes its television debut on Animal Planet!

SRK plays Baua Singh – a vertically challenged man who lives his life in XXL size. In fact, the film begins spectacularly. Director Anand L. Rai captures the pulse of a small town charmingly. Baua henpecks his father – the spectacular Tigmanshu Dhulia – and has no patience for sympathy.

For a moment, you think you’re in safe hands. Shah Rukh Khan’s best roles feature him as an underdog, and yet he keeps playing the role of Charmer Chachu. Baua is charming, witty, street-smart – in short, every SRK character ever, but in a smaller size. The film charts his life from Meerut, all the way to the dopey fantasy-land of an underpaid screenwriter. It is when Baua Singh meets Anushka Sharma for the first time – that the film truly goes to shit.

The most common grudge against Hindi films is this – The first half was good, but the second disappoints’. You know why?

Because Hindi filmmakers are actually imaginative in the first half. It’s when their voice translates to the screen, their ticks and traits shine. But in the second half, they fall prey to tropes of pyar, mohabbat, shaadi, and bachhe. Zero suffers from the same problem. If you do watch the film, make sure you buy lots of comfort food in the interval – you’ll need it!

Zero was written after director Anand L. Rai had LSD for the first time – there can be no other reason. The script seems to be written by a teenager chilling at his grandparent’s farmhouse during summer vacations. The kind of script that mistakes an indulgence for an epiphany. You can see it in Abhay Deol’s cameo – his eyes twinkle, almost like he’s thinking – Iske dealer ne isse chutiya bana diya. LOL’.

A loud, manipulative background score, colours and tears popping out of nowhere – Zero makes Rajkumar Hirani seem like Stanley Kubrick in comparison. The director throws every single cliché smack at your face – the hometown best friend, getting drunk to confess love, the realisation of sachha pyar, break-up with the heroine’s third wheel. When R. Madhavan comes up on screen, the makeup guys could have as well painted ‘Iska shaadi nahi hone wala’ on his face!

It’s baffling why Shah Rukh Khan would choose to produce and act in a film like this.

Him being a dwarf has no real relevance to the plot; it’s just a cheap gimmick. Compare this to Kamal Hasan’s Appu Raja – where his dwarfism was the crux of the plot. In this film, Baua Singh woos a NASA scientist, kisses a Bollywood superstar, hangs out in parties, reaches America, and becomes the first man to go to Mars – are you fucking kidding me? Why make him a dwarf then? Why not make him Shaktimaan – bramhaand ka rakshak?

The film left me feeling sympathetic for Shah Rukh Khan – an outsider who made his way to the top, only to suffer a back injury and end up spineless. History will remember him as the most talented actor of his time, who did not have the balls to experiment in an industry when he was right at the top. At 52, how unsure do you have to be, to appear on the screen in every second of a 2-hour, 45minute movie?

In the heavy scenes, SRK unlocks his old, rusty suitcase of stock expressions – outstretched arms, dimpled smiles – there’s not a single fresh expression in the second half. And all the dialoguebaazi about pyar and mohabbat! I wanted to puke and take a dump at the same time!

It’s 2018 – we produce the most films in the world. Can’t we seriously think beyond pyar, mohabbat, shaadi, bachha? Is that the entire spectrum of our emotional range? Every year, the audience rejects these romantic shitfests; and every year, filmmakers continue to shove these films down our throats. Ki shayad yeh wala chal jaaye?!?

An Insult And A Surprise

I never thought I’d ever write these lines, but Katrina Kaif gives the best performance in the film. Her staccato-style dialogue delivery doesn’t take away from her role but adds a coat of realism. It’s the first time she’s given a meaty role…but the filmmakers quickly chuck her out, to focus on the sachha pyar with Anushka Sharma.

Anushka Sharma plays a NASA scientist with cerebral palsy – a Sheetal Hawking if you will. I cringe every time Bollywood writes the role of a disabled character. We always make them weepy, melodramatic, unidimensional. Through just one character, Anushka Sharma manages to insult women, disabled people, astronauts, and science in general. It’s a remarkable achievement.

In fact, that’s what the movie really is. A gigantic, 200-crore insult. An insult to dwarves, and disabled people, and screenwriters, and Katrina Kaif’s acting abilities, and women, and the general intelligence of mankind.

A film so dumb, NASA didn’t give them permission to use their name. A film where a man is sent to space because Madhavan says ‘Mujhe yeh aadmi pasand hai. I like him’. Where a high-school dropout gets to operate spaceships because – hold your breath – he’s the size of a monkey! A film that somehow manages to transform humanity’s first manned mission to Mars, into the seventh season of Kasauti Zindagi Ki.

If you haven’t watched Zero yet, I envy you. Use the 300 rupees to buy a bottle of Old Monk and raise a toast to the dumbness of Bollywood. To taking an intelligent, hardworking actor like Shah Rukh Khan and trapping him in a vortex of bullshit.

And then do acid over the weekend and try writing a script. It will be better than this one.

Related posts:
Here's The Biryani Anthem We're All Been Waiting For - A Shape Of You Parody With Double Masala..!
[VoxSpace Selects] Decoding The Genesis And Defining A 'True Telugu Fan'
Review Of El Camino [The Breaking Bad Movie] : A Fitting Epilogue To A True Epic