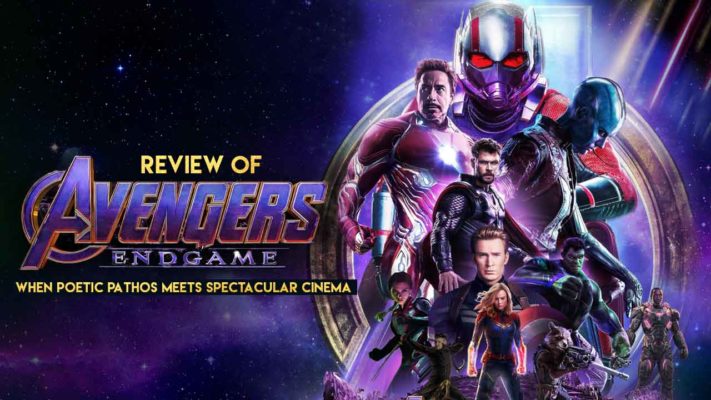 As a viewer of every single MCU movie ever made, I can today tell you that whatever you’ve seen till now in this gigantic franchise, is a pale afterthought when you compare it to – Avengers End Game. Yup, that’s it. The review is done. My job is done. I can now peacefully book tickets for the next available show, watch it again just to stand as a silent admirer of a creative ambition taking shape in the most exquisite manner. I can laugh again, gasp again, cry again and be left with a sense of closure, again. And yet after being through all that one more time, I would still be pondering over its magnificence, and would never find the academic acumen in me to dissect the movie and review it. All I can do is share my experience of watching it and perhaps give you a sense of what to expect out of the movie.

Of course, taking that line of experiential review serves me another purpose of saving you from any spoilers. And yes there are many moments within this film, which will take you by utter surprise. And I do not wish to spoil them for you, purely out of the concern of preserving the experience of watching this movie and following it with pulsating anticipation from the first frame to the last. And somewhere, I hope you connect with my experience when you watch the movie. And yes, take it from me, you need to watch this movie at least a couple of time, to truly grasp the magnitude of the brilliance of film making that’s on display. Avenger’s EndGame is by far the most satisfying Avengers movie till date, and I am not exaggerating when I say it is also the most overwhelming one.

Whatever It Takes -A Story Told Over A Decade

When you will watch this movie, which I highly recommend you do this weekend itself, so as to save yourself from any spillages in storylines online, you will experience an unforeseen urgency from the first frame itself. And that, being a storyteller myself, shook me up to sit straight and take notice. Anthony and Joe Russo, the director duo behind both Infinity War and EndGame, give you a sense of continuance which hits you like Thor’s Stormbreaker, thunderous and ravishing at the same time. They take the conventional way of storytelling, ie., the three-act structure, to establish the characters, establish their goal points, and establish a way of achieving them, and throw it out of the window. You will feel that the Russo brothers, don’t want you to waste your time or theirs.

In the initial thirty minutes of the movie, a story which can be told in maybe three hours is thrown at you, to seep in. Now here, Russo brothers utilize an advantage they’ve created for themselves. That of, establishing their characters and a sense of impending doom, in the earlier part (Infinity War), and so they don’t beat around the bush trying to call back to it. They treasure their screen time down to every single second. You need to be attentive all through to truly enjoy what they’ve created.

But why am I stressing so much on being attentive? Well for starters, Russo brothers are here essentially telling a story which has its metaphorical, literal and figurative seeds sown over the past decade of the Marvel Cinematic Universe, and easily over an estate of 10 to 12 movies of the franchise. Make no mistake, EndGame never runs dry off of story and substance. There’s something being told in every scene which has its own imperative or emotional value. In doing so, it carefully and admiringly pays back to the loyalists of the franchise. Their patience and perseverance are rewarded with countless Easter eggs and callbacks.

The Aftermath Of The Snap – Move On

Avengers: Endgame, starts with showing the aftermath of the universe-altering incident, ie, The Thanos Snap which happened in Avengers: Infinity War. As a writer, I could see that Russo brothers, along with writers Stephen McFeely and Christopher Markus, found this dystopian world premise incredibly promising. They show the superhero survivors, ie., Captain America, Thor, Tony Stark, Natasha Romanoff, Clint Barton, Rocket, Nebula among others, deal with their grief of loss and pain of guilt, in a way which is unique to them. Although not a spoiler, in this context, I truly liked how Captain America/Steve Rogers, takes up volunteer work at a group therapy to try to uplift and inspire people, albeit the remaining populace, even after everything. His giddy optimism and unshakeable hope are still persistent after everything he’s been through. In a similar fashion, everyone remaining have their own way of dealing with the moving on. Everyone does move on, but the sense that no one really has is a  fact which is beautifully established. The beauty lies in the humanness of their superhero existence till then.

As we progress through the movie, we see old friendships being rekindled, hope found in the smallest of chances, inventive situations which along with the characters involved in them, bring us to a sense of closure. On that note, it isn’t a spoiler that many unresolved character issues, which have been left dangling previously, are organically and smoothly tied up. And the genius of Russo brothers comes that in preparing this airtight screenplay, they never lose sight of spectacle cinema. As seen in the trailers, the sense of epic proportions is there, but allow me to say that the word epic is just a puny word.

Russo brothers, along with MCU head honcho Kevin Feige, understand their fanbase like no one else. And therefore, even though they have a solid story on hand, and the budget to make it a spectacle like no other, they never waste an opportunity to appeal to the fanboy dreams. And the movie is filled with fanboy moments. From iconic dialogues, joyous special appearances, to incidental references, and flourish of superhero powers, there’s everything in it. Specifically, a  fight sequence involving Thor, Captain America, Iron Man ( again a major ode to the first time they three meet in Avengers 2012), and Thanos is so fluidly choreographed and inventively thought out that even the mildest fan is left screaming at the top of his lungs.

The Trinity Of Superheroes

Make no mistake, this movie is fueled by the Trinity, the founding pillars of MCU, ie, Tony Stark/Iron Man, Thor, and Steve Rogers/Captain America. They shine through this movie with a spectacular flourish and captivating charisma, that it is hard to look away from them. Yes, other characters are given some great scenes as well (watch out for Captain Marvel’s fight sequences, or Hulk’s character arches, or Hawkeye’s anger), but this Trinity is the main engine driving this movie. They are given a free pass to delve deep into their characters and bring out their individualistic implications to everything happening around them. In doing so, they define their character arches, with finesse and grit that is sure to stay with you long after you’ve left the movie hall.

Other standout performances include Scott Lang/Ant-Man. For those who felt underwhelmed with Ant Man’s absence in Infinity War, have so much to celebrate here. Witty lines, extreme stakes and Paul Rudd’s inherent charm make you realize the wondrous nature of the character. It is hard not to tiptoe into spoiler territory here, but as is apparent from the trailer, Ant-Man is a key player in defeating Thanos in this movie. In that context, I truly admired the change in the philosophy of Thanos, which occurs during the last half an hour of the movie. It is so contextually logical that it makes absolute sense for him to do what he does.

One thing that made me watch ‘Infinity War’ almost seven times now, is the spectacular VFX loaded fight sequences. ‘Avengers’ has always taken pride in setting up multimillion-dollar action set pieces usually placed towards the end of the movie. While Avengers defined action set pieces, by bringing the Chittauri to New York, Avengers: Age Of Ultron brought an army of sentinel robots to destroy a city. Infinity War upped the ante by bringing Thanos’s army to fight on the open savannas of Wakanda. Here in EndGame, the climatic battle sequence will make all the aforementioned battles look pale. It is so poetically and dramatically choreographed that it will always be a class apart. I specifically liked the cinematography and framing that is pulled off in one of the scenes where the ‘Trinity’ walk into to fight Thanos. The whole scene is framed in such a poignant manner, that it seems like a renaissance painting.

And that brings me to a point where I feel the need to wrap up my thoughts, lest I start talking about the scenes, ala the twists and turns, and even the dramatic conclusions. One thing that I thought I’d never associate with MCU is the sense of poetry. Yes, the movie is as much poetic in its pathos, as much as it is brilliant in its spectacle. Avengers Endgame has out excelled its own franchise, in its manner of culminating a decade long promise of cinematic excellence. Of course, there will be online reviews coming towards you through this weekend. Some with spoilers. Some with analytical breakdowns. Some with bullet points of what worked and what didn’t. But allow me an opportunity to tell you that, it will be a futile effort on your part to even read reviews. Because EndGame is an experience which has something for everyone. It’s a fantastical achievement in blockbuster storytelling and a mammoth benchmark in visceral grandness.

I have perhaps only seen two or three movies in my life that have overwhelmed me with their sense of vision. Firstly, Steven Spielberg’s Jurassic Park. Second, James Cameroon’s Avatar. And I feel proud to say that EndGame completes a set of three for me. Someday I will again sit down and surgically understand what went through in making this movie. But for now, I hope you will experience the movie as rivetingly as I did. And I shall bring my feeling for this movie to a close. You go and book the best seats in the hall and watch this movie as soon as possible. Cause, I can do this all day…