[VoxSpace Selects] The Super Mess Of Super Deluxe Oozing Like Juice Out Of Plum: Not A Review 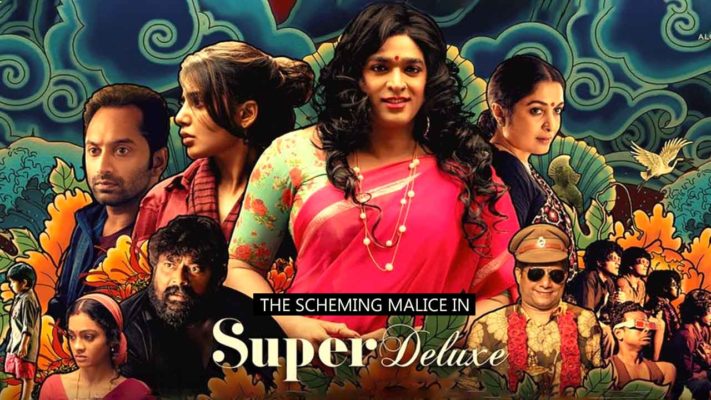 A Path-Breaking Mishmash Of Violence, Sexual Gratification, And Urban Depravity In Super Deluxe

Super Deluxe by Thiagarajan Kumararaja, exposes the panic bubbling under the apparently calm surface of our lives, waiting to flare-up into a massive, ugly commotion. It is almost like a chewing gum expanded beyond its capacity, and somebody is randomly pricking on its surface with a safety pin. Douglas Sirkian elements in the narrative are unmistakable and influential in giving us a drama on dark and brutal elements of life. As audiences, we are grateful for the crackpot philosophies infused within the plotline, and offered by the socially disdained lot; it is precisely where Super Deluxe shines with all its dark and murky underpinnings. Kumararaja stuns us into absolute awe by feeding meaningful jibber jabber from characters we thought would never carve a hollow into our souls.

At its best, Super Deluxe slam-bangs on us as if from a thin membrane of the speaker box, amplifying itself, and fitting into the gaps of our darkest fantasies, and foulest desires. The narrative fills into the cavities perfectly and remains a solid commentary on bureaucratic injustices, society, caste, jingoism, and emotional paroxysms all happening simultaneously in contemporary Chennai. The squalor presented in Super Deluxe is omnipresent, and till the end, the film offers us no poetic justice in our earthly existence. A criss-cross of mere coincidences in the end somehow turns out to be a coherent whole, and we marvel at our flawed and ambitious characters who so subtly enact the darker realities of Super Deluxe that are grossly unappreciated. Each of these flaws is shown to be so humane that they can be internalized within moments as the ball starts rolling.

Reading In Between The Lines

Albeit Super Deluxe tries to work on the fringes of extra-terrestrial realities, it primarily concerns itself with matters more trivial. In an act of austere elegance, Leela played by Ramya Krishnan, exerts her autonomy as a mother and pornstar in front of her son. But it soon gets diluted when his friend calls him thevidiya payale (son of a bitch) and both of them crack into a cheerful guffaw. In another instance, Jyothi who plays the wife of Shilpa, Jyothi’s former husband, and a trans woman, sighs as Shilpa tries to fit into the family and patriarchal duties. Super Deluxe offers no consolation for Jyothi and her social status as a married woman shackled by a middle-class household. While we offer our empathies to bereaved Shilpa and her son Rassu Kutty, we cannot help but feel remorse for Jyothi’s silence as the events unfurl. Rassu Kutty, a 7-year-old kid is constantly jibed by his teachers at school as “test-tube baby” for the inexplicable absence of his father.

Vembu and Mugil, Aunt Sallies of the film, bond in situations that would mostly leave you queasy in the stomach. Mugil comes across as a perturbed, and struggling actor with violence breaking off as beads of sweat on his temples. While offbeat romances are usually quirky and bittersweet, this one stinks of horrible dependency between the couple, one that might haunt them throughout their lives.

The Little Rebels Of Nowhere

The Garish Discontentment In Super Deluxe

Painted loud and bright, domestic life in Super Deluxe is far from being a comfort zone; rather a breeding ground for malaise and apathy. No relationship would have survived within its confinement had they not confronted/clashed with the greater apathy of the universe. Super Deluxe might not be a masterpiece at being eerily wicked, but it excels at connecting the frayed chords. The combination of high-voltage mystery, comic relief, wanton recklessness, and revolting images does the trick! Essentially a nightmare turned into an extravaganza, the drama reeks of both aimless and institutionalized violence. You can still distill the happy elements out of it as it ends on a different note with perhaps no possibility of redemption of the characters.

Although Super Deluxe fails to resonate in some moments of its running time, nonetheless they fit comfortably in the end. The narrative is interspersed with such dismal elements and it is not even some seedy underbelly of society, but an uptight community functioning right under your nose.  As Kumararaja flips aside any religious undertone or possibility of salvation, Chennai’s encroaching wasteland continues selling sex and philosophy like cheap hotcakes. Like a mathematical calculation, every revered social institution crumbles like a cookie in front of your eyes. You cannot help but applaud at Kumararaja’s skills as a storyteller in concocting, and creating a story out of it! Super Deluxe has deployed a number of tricks to question a cross-bearing savior to offer us deliverance, and the spiritual depravity of generations running after precious nothing. Herein betrayal is more layered, and violence solid as individuals easily gravitate towards it.