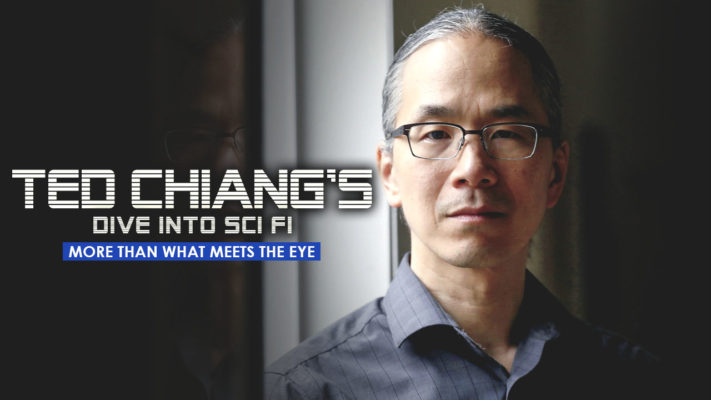 With Ted Chiang, Sci-Fi Is Not Necessarily Dystopian, And Can Be Elegiac Too

The vast repertoire of speculative literature beautifully revolves around the complexities of human life in close (dis)harmony with technocrats of society. Science Fiction of late has narrowed itself into monstrous cyborgs fueled with demoniac capabilities of darting the modern society towards infinite chaos. Popular adaptation of notoriously famous novels like Alien Outpost, The Umbrella Academy, Ex Machina, Leila,and talks on streaming The Three-Body Problem doing the rounds, Netflix generation has come to associate sci-fi with dystopia playing peekaboo in the corner. There is no denying that beauty of dystopian near futures fused with political gimmicks would continue resonating within the contemporary world.  Even Brave New World is not far from buzzing on streaming sites. However, more engineered sci-fi plots- idyllic and elegiac novellas are gleaming in the horizon too.

Ted Chiang, a lesser-known sci-fi author, has intertwined folklore, Biblical references, theology, bioethics, and A.I to produce dream sequences in his novels, almost inducing his readers into a calm repose. Chiang’s plots are strikingly reassuring, and have never for once lost momentum in exploring the enigma of sci-fi as a genre. His flavour of sci-fi might not have trumpeted into our bedrooms yet, but is already a hype among nerds. The amazing cooking pot of his works contains a proportionate mixture of science and humanism, something readers or audiences would struggle to find even from celebrated vendors.

Ted Chiang ignites the surreal dream of remedying our present calamities, with a scientific and rational consciousness that sky-high dystopian productions could not offer. For instance, ”Exhalation” enunciates on the reality of two functioning lungs in humans in unambiguous and forthright tone. One lung is disposable air at the nearby filling station whenever it will run low on. Chiang is passionate about expounding on his basic philosophy of life, visioning a different premise in his world of simulation and science –

“Contemplate the marvel that is existence, and rejoice that you are able to do so.”

Chiang’s deep interests in human beings demands a magnum opus from him; it should be preferably a cross between The Time Machine and Clockwork Orange. Typical Chiang’s sci-fi reads intrigue us with pertinent questions about the humiliating cacophony on earth brought down by the human existence. Refreshingly deviating, and all-encompassing, Chiang’s poetic justice includes non-human creatures from extra-terrestrial dimension, and even the animal kingdom on earth. When juxtaposed against the global scenario, Chiang could amass huge popularity by churning out storylines more experimental and circumventing recent crises- depletion of groundwater, loss of migratory birds, and plastic waste.

Chiang could fill the void left unaddressed by novelists with his fiction writing style that flows uninterrupted like an essay or Mozart’s solos, all concluding in a crescendo unmatched by anything unprecedented. My personal favourite remains “The Great Silence” that questions the possibility of salvation among interspecies- if one species can at all forgive the other for letting in inexplicable savagery into the order.

“But I and my fellow parrots are right here. Why aren’t they interested in listening to our voices?” – A line from The Great Silence by Ted Chiang, where a parrot introspects on the extinction of its species.

In present times, when we are trying to balance on the precipice of major climatic anomalies, Chiang’s symphony of scientific investigations rings in our ears. If only could Netflix and Hotstar would chill for a while, and transmute Chiang’s stories into a visual treat evoking the magic of Kubrick! Chiang’s elaborate and thought-provoking narratives often end up appearing too real to be discarded as mere fiction. Readers have been bowled over by Chiang’s airtight logic with which he elucidates on AI, divinity, salvation, interspecies communication, parallel universe, and free will. Deeper philosophical questions that have so far bordered on the fringes in contemporary dystopian literature, find their rightful place in Chiang’s imagination and his work shines in its minimalist elegance.

His plotlines have a symmetry usually riddled with puzzle-box stories, utopian, brainstorming with theories of multiple selves,and continuously threatening our harboured illusion of free will. Chiang has managed to create documents on personal relationships transcending the immediate surroundings with ease and transparency. It could be seen as a deliverance of sci-fi, a genre that has relegated to anticipated storylines, fables, and plot twists. We can build up a decent treasure trove for Gen Z; fiction blended with complex mysteries, high level of detailing, and timeless art instead of just piling up identical sci-fi dystopias for an altogether different horror.

A great complacency has settled within audiences who are comfortable with watching stalwart-directed near work dystopias on feminism, white supremacy, caste, capitalism, and nationalism. Dystopian motion pictures that once used to come as one-offs now look as if manufactured by candyfloss machines. Deviating a little from the conventional tropes, Chiang’s work interrogates a possible future wrought by technology, poses serious questions on ethical damnation of human beings in this dimension and whether salvation is at all negotiable outside our linear timeline.