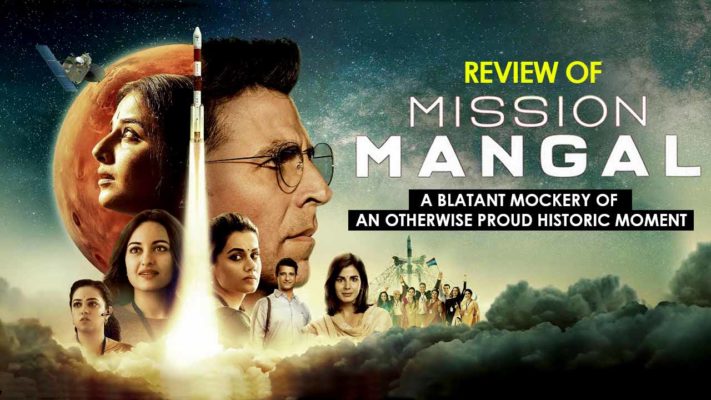 Mission Mangal – An Ancient Lesson Bestowed Upon Us

To all the genius and stupid people out there, I am going to enlighten you with a secret mantra, on how you can solve any issue related to any electronic appliance you use. Whenever your respective device is not working, just turn it off and switch it on. BOOM! There you go. I have to admit it’s not my idea though. Thanks to Mission Mangal, I have been bestowed with this ancient mantra. Let me elaborate. In Mission Mangal Movie, there is a scene (unfortunately), where Kritika Aggarwal (played by Taapsee Pannu), an esteemed ISRO scientist, turns off all the power of ISRO control room and turns it back again, as a solution learnt from her experience with her personal computer. ARE YOU FREAKING KIDDING ME! But don’t worry, there are enough scenes similar to the above one which will question your existence and make your mind numb.

So, Akshay Kumar is back with another ‘social/national’ movie and this time it’s about the Mars Orbiter Mission aka Mangalyaan mission that made India proud. And this movie is basically targeting the National Awards due next year (*Wink*). Let’s delve more into this movie and try to understand this masterpiece (sarcasm intended).

Story – What The Fuck Was That?

As we all know, Mission Mangal is based on the successful Mars Orbiter Mission (MOM) operated by Indian Space Research Organization (ISRO) launched on 5th November 2013. The mission had a very strong core team of female scientists and that is where the movie derives its inspiration from.

The movie begins with Tara Shinde (played by Vidya Balan) who is trying to balance the role of being a wife, a mother and a daughter in law, while being one of the chief scientists at ISRO. Due to a tiny error in her judgment, ISRO fails at a highly anticipated space mission. But the director of the mission, Rakesh Dhawan (played by Akshay Kumar), a generous, motivational, innovative and a kind human being takes the blame on himself. He is then sent to work on Mars Orbiter Mission. From here on, it’s the same old basic template story of a protagonist based on his/her failure, determined to redeem himself/herself, and who forms a team of individuals who are termed as losers by their respective friends, family and pioneers, sets on to achieve an impossible mission/task.

Now the problem with the movie is that its story has more fictional elements than the true events. I can understand the need of fictionalizing the true events, but making them ridiculously unbelievable and unreal is an utter sin. I mean, in the pursuit of making the movie ‘entertaining’, you can’t expect the audience to believe in any bull shit that you throw at them. The conflicts in the movie are plainly below average and not at all thought out. Ironically, one can see the solutions of these conflicts coming, from as far as Mars. Even the word convenient looks so ordinary when compared to the screenplay of this movie.

Characters – What The Fuck Was That!?

One of the protagonists, Rakesh Dhawan, has no character background, motivations or any other information. He is termed as one of the best scientists ISRO has ever had, but we are never given the reason as to why. And except shouting, mocking or coming up with random childish ideas to motivate everyone, he doesn’t do anything in particular. I cannot accept the fact that an esteemed  ISRO scientist (in this case he is the best) wants to take up a mission on the back of some pep talk about dreams and a painful sequence of fake calling Late APJ Abdul Kalam. It’s a huge insult to all the scientists for the sake of entertainment.

Sanjay Kapoor’s character is so badly written that you never understand the reason behind his behavior or actions. Same is the case with some more characters in the movie. Another example for stupidity is, Sharman Joshi’s character, who has trained himself all through his life to become a scientist doesn’t want to accept a mission based on some horoscope thingy he believes in. It is nuts!!

Visual Treatment – What The Fuck Was That!!

The treatment of the story and its characters is just bad. There are many scenes that are unnecessary yet are included for no good reason. For example, the whole team goes to a bar and get drunk and them being the good citizens of the country, decide to go back home in a metro. In the metro, a couple of people are trying to watch the news regarding the Mars Mission. But Rakesh Dhawan doesn’t like it and he forces them to not watch it. And when these men raise their voice against it, the whole women gang (who are ISRO Scientists by the way) start hitting them black and blue. Empowerment you see?

The Screenplay is all over the place. There are so many exposition scenes in the movie that you’ll start feeling a strong urge to stop watching it immediately. The movie throws a bad light on the process of a globally recognized and respected organization, ISRO.  The fictional part of the story takes over so much that the magic of real event is just lost. Of course you need entertainment to sell a movie, but having said that, you cannot make a mockery of something prestigious.

What Worked In The Movie?

Every actor in the movie right from the main cast to the junior ones, act very well. Vidya Balan in particular was a treat to watch and essayed the various emotions her character goes through, superbly. She adds these small nuances to her acting which makes her character real. Apart from this, there are couple of jokes which will make sure you giggle once in a while.

What The Fuck Was Everything!!

On a macro and philosophical scale, the movie tries to send a strong message about women power and their support towards feminism. But, the ideology on the basic level is not right and hence it comes out otherwise.

The movie had some amazing actors in the lineup, some of whom are even national award winners. But apart from Akshay Kumar and Vidya Balan, rest of the actors are not used well and it’s heart wrenching to see that. Most of their roles were not meaty at all and looks like they were used to just fill the cast.

I didn’t learn anything new about the whole Mars Orbiter Mission by watching this movie. It’s sad that despite this being one of the most iconic and historic moments in Indian history, the makers of the movie felt that it didn’t have enough conflicts and hence decided to create the fictional ones.

Finally, I was highly disappointed after watching the movie and felt bad that the scientists were shown as dumb and stupid. I would not recommend anyone to watch this movie, but you are all welcome to experience the adventure on your own risk. Have a good weekend (or weekday, if you are not reading it on a weekend).