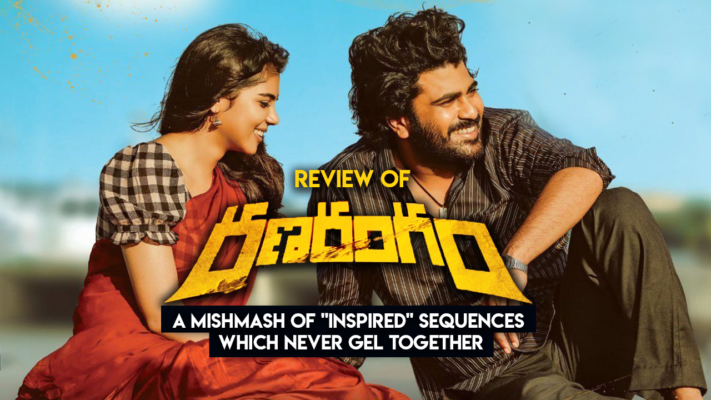 I was not very well-versed with the director Sudheer Varma before walking into the film. I had only watched his first ever film Swamy Ra Ra, which was an interesting crime caper. I hindsight, I can see that this film suffers from the same problems former the suffered from. The only difference being that, it does not even have the novelty of his first film. So, getting back to Ranarangam, I had loved the trailer and I have always liked Sharwanand’s screen presence. I was not expecting a masterpiece, but I was expecting an entertaining story of a larger than life gangster, inspired or in the same vain as The Godfather Saga. What I got was a pastiche of otherwise great scenes haphazardly put together with no thought put into the cohesion or pacing.

The plot mainly revolves around Deva (Sharwanand), a brash gangster with a heart of gold over two significant periods of his life. In the 1990’s where he is building his empire, due to the opportunities created by prohibition of liquor and the present where is fighting to hold on to his power with new known and unknown enemies coming after him. The film borrows the structure from Godfather 2, in the words of the director himself. At an idea level, it is very cool. In fact, that was one of the reasons I was so excited. There hasn’t been a really cool gangster film in Telugu in as long as I can remember. The what was the problem you say? The problem is that, ideas and scenes don’t make a movie, they need to cohesively make sense as a story. Then the scenes give it a structure.

“Inspiration” Isn’t A Bad Thing But When Done Properly

I am saying this upfront – taking inspiration from anywhere is not a bad trait, I love it actually. I am not averse post-modernism.  I like finding Easter eggs and re-interpretations of my favorite moments in new ways. The key word being new. Most of my favorite film-maker from Paul Thomas Anderson to Quentin Tarantino to Anurag Kashyap to Damien Chazelle, talk about taking things from their favourite films. They even use the words steal. The main difference being that they cohesively fit as one piece and tell a story. The problem here is that these moments feel random shuffle of the film-makers favourite scenes, then a carefully curated and put together mixed-tape you give someone you care about.

The Performances Save The Day For Ranarangam

The performances are pretty good all around. Sharwanand, plays the stoic gangster part perfectly and so do all the actors for their part. The only problem would be that they are not given a lot to do. Most of these characters appear and disappear at the convenience of the plot progression. The casting for the rest smaller characters is good, especially for the friend’s gang that they have in the flashback.

Now for the good parts. The technical aspects for the film were all top-notch. The cinematography was pleasing to the eye with very cool high-contrast imagery. The two time lines looked and felt different form the cold blue and black palette of the present to the bright orange and red of the past. The editing could be tight, but the transitions kind of pump life into the otherwise dull film. The music is soothing when it needs to be, sombre when it needs to and enticing when needs to. The sound-design and dubbing work was pretty good.

All in all, it is a well-constructed film at a technical level, but lacks the conviction at a script level. You can bring in the best talent from all over the world to put together a film, but without the proper foundation of a good script, a film is going to falter and fall fletton its face. I would still suggest to watch the film, if you have watched the films referenced here. But if you marginally well-versed with 90’s and early 2000’s European and American films, skip it.