VoxTalks With Maya Nelluri : An Eloquent Artist Both On-Screen And Off-Screen 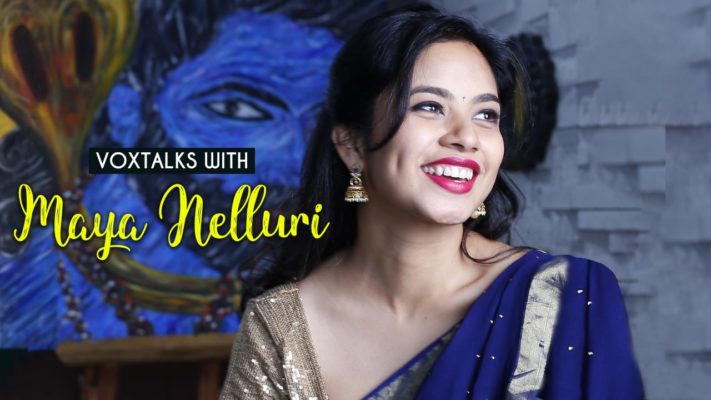 We all have passions in our life and things we want to achieve. The difference between people who achieve them and the people who don’t is just courage to take the leap. Today we met one such person, Maya Nelluri. She is actor, painter, writer, coordinator and much more. She wants to try anything related to arts and excels at most of them. She recently finished a very well received art exhibition and debuted in her first feature film. Here are some excerpts from our conversation.

So, let’s first begin with your origins. You being from New Zealand, how did you end up in the entertainment scene in Hyderabad?

I was always in love with Telugu cinema. Even though I grew up in NZ my family would always get DVDs or download the latest Telugu films so I grew up watching them. It was also my anchor to India because most of my extended family had also migrated to NZ or Australia. Once when a cousin of mine was getting married in Hyderabad I came to the wedding. Then I met Vanaja Banagiri who gave me a job at a magazine; I got into the film industry thanks to her. While in Hyderabad I got to have three art exhibitions, illustrated for an app and was able to do some other freelance art work. I also got to debut as an actor in Ranarangam that’s just released so I’m excited about that journey as well.

You seem to be interested in various forms of art from painting to acting. Where does this urge for self-expression come from?

I’ve always been a creative soul and I’m happiest when I’m able to express myself through any art form. A lot of it comes naturally to me but I have trained in painting and acting while I was in NZ and Australia (after that). It’s helped me gain confidence to do them professionally.

Let’s try to understand your artistic process. How does one of your pieces come alive from the inspiration phase to execution?

I used to paint since I was a child; earlier it was mostly what I saw. As the years passed different ideas would just come to me randomly. I write them down or just do a rough sketch at the time. Afterwards I paint them onto canvas, chalk or glass bottles. I mostly paint Shiva, Shakti and abstract forms.

You seem to gravitate a lot to minimalism and mythological imagery. Where does that come from?

That’s what attracts me. Even the colours I use are simple and bold – black, white, reds and blues. Is it just the imagery that informs your art or do the stories behind these figures find their way into the work? If so, in what way? Could you give our readers an example?

Recently a group art exhibition was conducted by Octopus Group at Siddeshwari. It was an all women group with incredible variety. My collection from that show had a portrait of Shiva in a very modern form, a close up of Maa Kaali’s eyes, and two abstract representations of life as I see it. There is a red circle which symbolizes life placed between black and white because according to me everything in life is grey. All my paintings are also deeply inspired by my childhood spent in NZ and Australia. I’ve used the aboriginal patterns from those parts of the world and also have different inscriptions from our holy books etched into the paintings.

This is a very eventful month for you. Your debut film is also out. Can you tell us how that came to be?

I used to work as a journalist in the industry for a couple of years. During that time I was asked to act but at the time I had other issues. But two years ago I decided to focus on acting. I studied it in Sydney and then moved back to Hyderabad. I had done a couple of short film/skits for YouTube initially. After that thankfully Director Sudheer Varma decided to cast me in Ranarangam. I’m quite grateful to him for giving me a noticeable role. The film was very stylish and gripping; and a lot of people liked me in the film so I’m very happy that I got to be a part of it.

How was your experience working on Ranarangam?

Studying acting and actually acting on location are totally different. From my classes I gained confidence but when I actually got onto the set I learnt about the practical aspects of shoot. It was a major learning curve. I loved being on set as well because the team was amazing and I was happy being around them and soaking up the knowledge.

Can you tell us a little about how you prep for your scenes?

I was told about the characterisation of Manga so we decided on the outfits to fit a girl from a low socio-economic background in a village in the 90s. As for the acting, the director would explain to us the scene and what he wanted out of us. Sudheer sir has the amazing ability to explain in a way that allows you freedom while getting what he wants out of you as an actor.

So, what can we expect from you next?

Right now, I’m shooting for a Telugu film directed by Goutham EVS as a lead. I’m also shooting for a Zee5 Original web-series directed by Hussain Shah Kiran, as a lead. There are a couple of other projects under discussion. I’m hoping the rest of the year takes off and you will get to see a lot more of me in the coming days!

Thank you, Maya. It was a real pleasure talking to you. Keep doing more great stuff.