VoxTalks With Swaroop RSJ : A Visionary Director Who Is Here To Change The Game 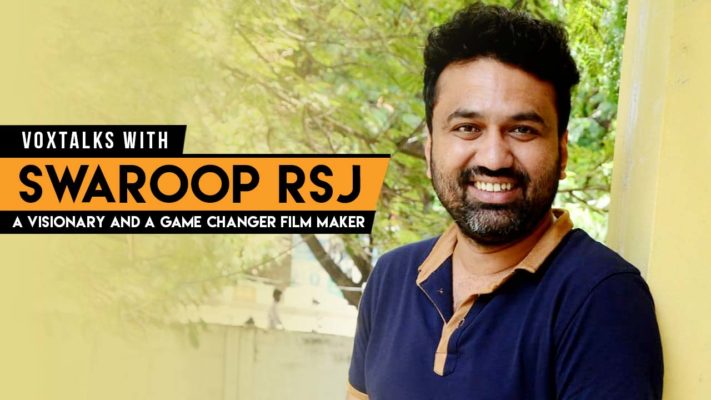 Swaroop RSJ: The Director Who Is Here To Express His Love For Cinema

Swaroop RSJ, the latest entrant in Telugu Film Industry, is here to change the way movies are made. He had an amazing debut with his movie Agent Sai Srinivas Athreya, which he wrote and directed. The movie released a couple of months back and was termed successful immediately by the audience and critics. By mixing two different genres, that is comedy and thriller, Swaroop experimented in his first movie itself and it paid off well. We were fascinated with the treatment of the movie and were curious to know the process behind it. Fortunately, we got to talk to him and pick his brain about his debut movie, the process behind making the movie, the difference about making a short film and a feature film and much more.

First of all, many congratulations on the success of Agent Sai Srinivas Athreya. What a debut! Has the positive buzz and response for the movie synced down for you, or does it still feel like a dream?

Thanks a lot!! It is a delightful dream and I don’t wish to wake up from the sleep. I feel like an audience watching inception movie climax. Not sure if it is a dream or real (ha ha).

Let’s rewind a little bit and go back to the time when you were not into filmmaking. What vision did you have back then for your life? And what was the moment that triggered the filmmaker inside you?

I was born in Nellore, brought up in Tirupathi. I did my engineering in Electronics and Communication engineering and always wanted to become an Electronic Engineer. After working in the semiconductor field for 5+ years, I joined a film club called DMT. It was a group of passionate aspiring filmmakers. We used to discuss about films after office hours and make a few short films during the weekends. Though I always had an inclination towards films, it was during that time I developed love towards film making. I used to enjoy making Short videos and demo ads and I used to love myself when I made those. That is when I realized I should seriously consider filmmaking.

Prior to Agent Sai Srinivas Athreya, you have written and directed a couple of short films. What are the major differences you feel between making a short film and a feature film?

Short films are the best platform to test yourself. It showcases your style and builds your portfolio. You can explore and you can fail too. Feature films are more about man management, you need to deal with 80 odd people every day whom you never met. You can explore in feature films too, but you are not supposed to fail. But remember, short stories may not be perfect warm-ups to write feature film scripts, instead they help you write interesting moments, scenes and sequences in a feature film. More importantly, short films are about gaining confidence to make feature films.

Agent Sai Srinivas Athreya is one of the most successful Telugu movies this year. We are curious to know how it all begin? Can you take us through your journey of making this movie, right from the stage of ideation to the theatrical release?

It was a dream to bring back Detective movies to Telugu. I started writing the script in 2016 and I took close to 1 month to finish one line order of the film. Once completed, I took a month break to watch movies of similar genre. I watched close to 50 best movies in that genre and started to analyze the flow of these kinds of movies. I mean how they begin, how a conflict is created and how do they end. Those movies helped alot to understand how to write the screenplay for my movie.

I took around 3 to 4 months to finish the entire script. After that, I wanted a debutant to play the main lead and at the same time, I wanted the lead to be extremely talented. I contacted Naveen, he agreed to be a part of the script. We both worked on the script close to eight months so that I could understand his mannerisms and body language to incorporate them into the character. Once we were confident about the script, we started searching for a producer. At the same time, Rahul Yadav’s Malli Raava was released. I approached him on Facebook and sent him the entire script. He liked it and we started pre-production a month after we met Rahul. Pre-production lasted 4 months with 45 days of the acting workshop for Naveen. We started Shoot in July and shot for close to 50 days.

Once we were ready with the final product, we had several distributor shows and none believed in the movie. We delayed the films’ release by almost 2 months as we couldn’t get a distributor. That was the toughest phase. Our trailer did the trick and gave us the much-needed exposure then. The first day morning shows brought us to the limelight and there was no looking back.

This movie in a way worked as a launching pad for Naveen Polishetty. Naveen has also written the screenplay along with you. How did you guys connect initially and how was it working with him firstly on the script and then on sets?

As I said earlier, I approached him through Facebook. I shared the script and he loved it. We decided to work on it taking into consideration each of our inputs and make it better. He is an incredible guy to work with. Naveen as an actor is an addiction :). I wouldn’t miss a chance to work with him again.

Usually, it’s quite challenging to pull off a feature especially the kind of genre you chose in a shoestring budget. How difficult was it for you to make the movie in a restricted budget and also what mindset did you have in regards to financial limitations before the shoot began?

We initially wanted to finish in a much lesser budget than what we spent now. But Rahul never wanted to compromise and gave us all liberty in terms of budget to get the expected output. Nevertheless, we wanted to be responsible towards our debut film and so spent extra 2 months on pre-production to make sure we shoot the film in a restricted budget. We led location recce for 25 days to make sure we find affordable locations.

Whenever we hear and talk about a Detective, the first name which pops in mind is the great Sherlock Holmes. How challenging was it for you as the writer to offer a new character and have someone whom people would fall in love with?

According to me, Chantabbai is one of the brilliantly written characters in Telugu cinema and a golden standard for detective movies. So my closest reference character was Chantabbai.

Once I picturized my detective as someone who imitates prominent detective movie characters, the only toughest part was to ensure that this character doesn’t end up seeming like a caricature.

With the kind of success you got with your debut movie, does it put any sort of pressure on you in regards to high expectations of quality work? If yes, how do you handle it?

I am not sure of the pressure, but I certainly feel more responsible now, all I owe the audience is a good film.

What all are the genres that we can expect from you going forward? And when can we see you back with another project?

I personally love Thriller, Drama, and Comedy. So If I write something it will be one of these genres or a mix of them.

Currently, I am working on the script of my second project. This particular script demands a lot of time to be invested in it. If things fall in place, it might start early next year.

Who are your favourite filmmakers who inspire you?

What kind of genre in films do you personally like?

Can you recommend five movies to watch and why?

1. Anukokunda Oka Roju: For its brilliantly written screenplay and characters

2. C/O Kancharapalem: For its organic writing

3. Shutter Island: I loved the way the film questions your sanity

4. Invisible Guest: For its unpredictable screenplay

5. All Raj Kumar Hirani Movies: For the way he treats the film and amazingly written characters

All the movies stated above not only starts well but ends fantastically.

Who can solve a case quicker – Agent Sai Srinivas Athreya or Sherlock Holmes?

Any advice you want to give to the aspiring filmmakers?

Just introspect two things – What makes YOU special as a filmmaker and what is it YOU bring to the table better than anyone else? Good luck.

Thus, Swaroop gives us a sneak peek of his colourful world and inspires the filmmakers out there to work hard and do good work. We wish him all the best and until next time.!