VoxTalks With Coliseum Productions : ‘No Other Art Form Offers What Theatre Does’ 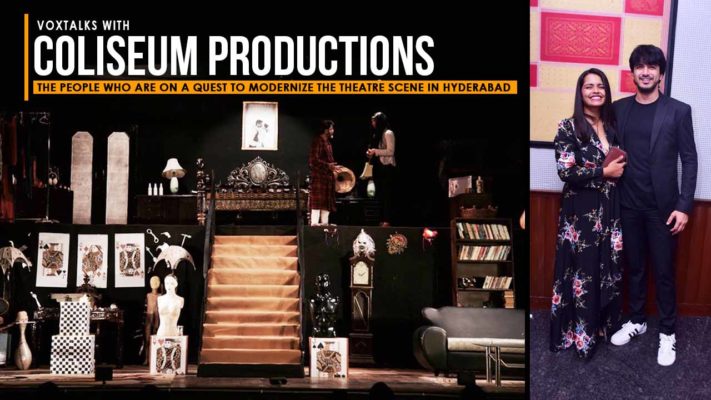 Coliseum productions is an innovative and forward-thinking production house that wants to revive the theatre scene in Hyderabad. Preksha Trivedi and Dwij Vasavada co-own this company. Purists in thought and very practical in their action, they buy rights for some very interesting acclaimed work from all over the world to perform here. One of the USP’s of their productions has always been their ambitious set design and amazing casting. They are all set come out with their next production, Night of 16th January. We had a chat with them about the philosophy behind the company and their process. Here are some excerpts from that conversation:

Where does the idea come from for Coliseum productions and how has your journey been till now?

So, this was an idea at various stages, Preksha and I had from quite some time.  We had the opportunity to work with various interesting productions throughout our career. We wanted to make theatre a cultural mainstay. We saw an opportunity in Hyderabad. There has been a constant rise in diversity here, which increases the market for new forms of art. We realized that there are a lot of internationally acclaimed plays that can be performed here, with the people from here, for the people from Hyderabad. One of the first plays we wanted to do was William Shakespeare’s Macbeth. We were keen on doing something like that.

A classic that is globally famous and bringing something like that to Hyderabad. That is where it all came from. The inception of the idea came from there.  I brought the idea to Preksha, she was also very keen on doing something like that. So, that became the start of our journey. We wanted to stage this play at Phoenix Arena. We needed a name for the production at the time, but we didn’t even have a group by then, we just wanted to do a play. So, we sort of just came up with the name coliseum productions. That is kind of how our journey began, HAHA.

Your company mainly concentrates on theatre productions, if I can say that. What is it that interests you in theatre?

There are many things that we do at our company. We grew up doing theatre and it is something close to our heart. But we are also interested in other forms of expression. We are actually coming out with a short film; we also conduct a lot of workshops. We are open to anything related to art; we do not want to constrict ourselves.

So, I take care of the whole production and the set. As the executive producer, making things fall into place and moving them along smoothly is my job. The rest of the things Dwij can explain to you.

As she said, she takes care of the Production and execution side of things. Like, stage setup, lighting, etc. I take care of the directorial side of things. Managing actors, directing the play and setting a vision, you know, that kind of thing. That’s how our responsibilities are shared normally.

You guys normally buy the rights for the plays that you perform. How does that whole process work behind the scenes?

We are very keen on buying the rights for anything we produce. All the plays we selected are also copyrighted. They are not really public domain. We had done ‘Sleuth’, right? That was copyrighted content. Now we are doing “The Night Of 16th January”, which is again copyrighted content. So, for any of these plays, there are different agencies involved are involved in the sale of the rights. We write to them regarding our intentions, they write back. There is a lot of paperwork that is involved and a lot of back and forth. Sleuth belonged to Samuel French and Night Of 16th January belongs to Penguin. There are productions all over the world who do these plays. We just kind of borrow that content from them, and perform it with our cast. There is also an adaptation model we follow pretty strictly.

In your work, there is going be a lot of casting decisions you would have to take. Can you talk a little bit about your casting process? Is there any advice you would give to new aspirants?

It varies from play to play, to be honest. Be it Macbeth or Sleuth, we cast as per the project’s demands. Macbeth had around 37 actors for the next production we only had two actors. So, what we generally do is, we call for a general audition. We have an audition model where we invite people to come prepared with an English monologue, anything that they want to try. We look for the differentiating aspect of each actor, it could be their language or certain ticks or quirks, you know. One more thing that has helped us a lot is the theatre workshops. There we can find people who are showing real talent or passion.

There are certain things you start observing after some time in the job. Maybe, how they are in real life, how they behave in auditions, etc. We don’t only find our actors through this process. We find people to work behind the scenes with us too. The audition is nothing but an interview. We put out a call, talk to them and hire people who align with our vision. We repeat this process for every play. We follow a very strict intern model. They are mostly project-based interns.

Due to the rise of online content and the number of places to go to in Hyderabad. The attention span of most people is so small. In this market and this time. How do you get the audience’s attention and how do you retain it?

What we focussed on a lot when we started off. Our key objective, you can say was to break the barrier of just the regular theatre watching audience. We wanted newer people to watch theatre. Previously, we used to market mostly on BookMyShow or a generic Facebook announcement. But we are trying newer strategies to attract the audience. For example, we started cutting trailers for our plays similar to movie trailers. We thought that we should invest some money and thought in to actually packaging the whole play in a more palatable way. That is something that is helping lately. We do a lot of offline work too. We have a lot of partnerships with like cafes, and restaurants, who would associate and align with our vision. They also help promote the plays for us.

To add to that, there is always a huge set of the audience looking for quality. We compromise on a lot of things personally, but we can’t compromise on the quality of the play. We do the marketing and all these to maximize the viewership, but our main goal is still to give the best quality product to the people who are there who come to watch us.

Once they step into the venue, everything is planned out. They are greeted, they are shown their seats, etc. It is a personal preference that we have. We like to put up huge sets and productions. Even that becomes a huge selling point. Even if they are not interested in the play as they walk in, the actors are so committed and good, that people normally are captivated. We even greet them as they leave and give them small souvenirs to keep. All these things make it a complete experience.

For one of our plays, we did a special show for students. We invited a bunch of students from different schools and teachers to come watch the show. This allowed us to open a new market for ourselves and also doubled as an educative experience. We want to build an audience from our future generations.

It also allows them to really understand what they want to do if they are exposed to new opportunities. When I was growing up, I didn’t know that this was something I could pursue. We just want to fill that gap; we can create opportunity. What they do with that opportunity is their decision, we just want that door slightly open.

Aayan- The Journey |Making of the Short Film | Coliseum Productions

What does theatre offer that you cannot get from any other art form?

Happiness. HAHA. That is a generic answer but, yeah.

I also believe it gives you structure and a little bit of fearlessness. It allows you to fight things like stage fear at a very young age, which allows you to prepare for the real world. It allows you to develop the inner self and really nurture into a healthy adult. Unlike film, there is no filter between you and the audience which gives you scope for improvisation. It is always scary to get on stage, but you still get on. Despite doing this for so long, I still get butterflies sometimes. That is something that is valuable, I think. No other art form offers that kind of opportunity. It takes a lot of discipline to do it every day.

For me, I would still say happiness. HAHA.

I agree with what Dwij says. But, that moment when you are called on stage, and you are just standing there. I cannot replace that. So, for me, its happiness. Lastly, what can we expect from you next?

Night of 16th January is happening on the 21st of November.

We have a short film coming out soon called, Aayaan, which was a crowd-funded project. We shot the entire thing in collaboration with the Himachal Pradesh Tourism Department. We are doing promotions for the film at this point.