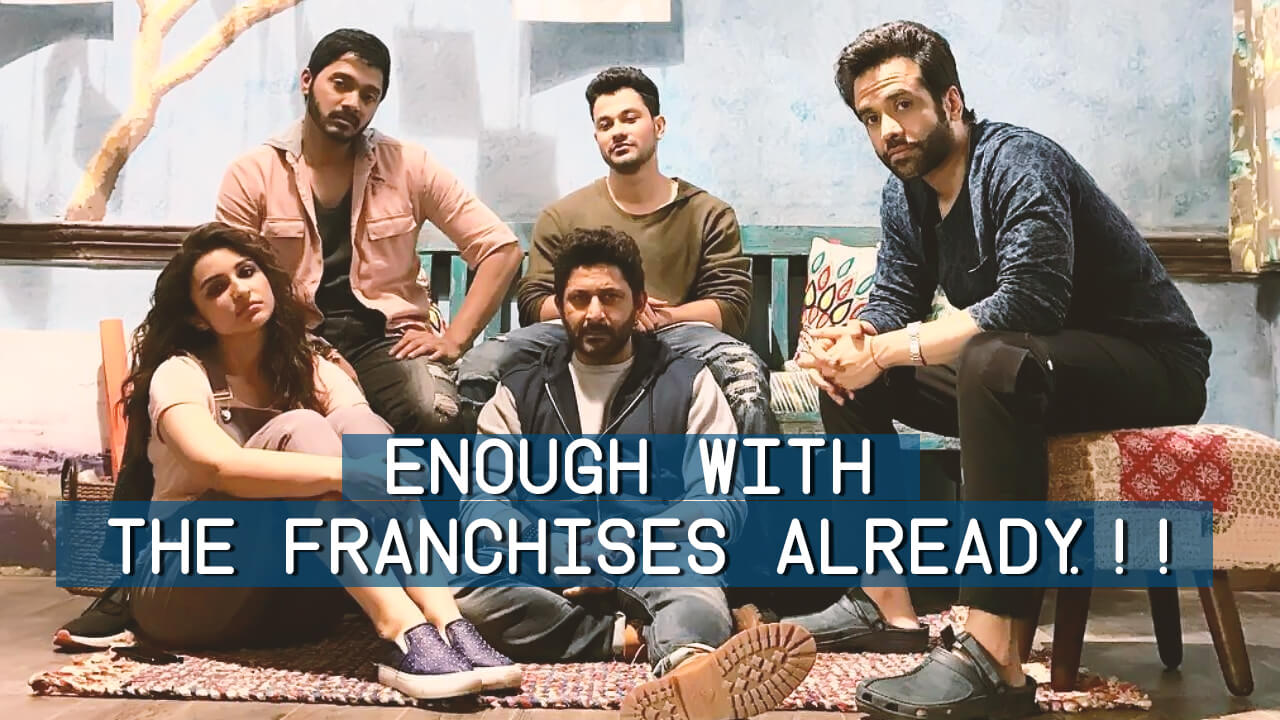 Sequels And More Sequels Everywhere, Not One To Enjoy

If you are a designated Bollywood devotee there is no way that you have missed one of the most overriding trends that have appeared in Bollywood in the last decade. I am talking about the deluge of movies that has a ‘2’ in their titles or as we prefer to call them ‘sequels’. Chances are you have also not missed the fact that almost all of them, with the exceptions of a handful, are quite frankly atrocious and completely ruins the fond memories you have of the original movie and a large majority of them even tank at the box office.

A sensible mind would question then – Why Keep Churning Out Such Films? but hey! Its Bollywood we are talking about.

Formulas are sacrosanct when it comes to our good old Hindi films and the assumption that if something has worked once it would work again is sacred for filmmakers,  especially for their marketing and extremely zealous publicity teams.

While it is not entirely a rubbish idea to bank upon the success of one film and take it further by banking on the loved characters and recall value, the number of disastrous films that this mindset has yielded goes to show, that when it comes to part 2s, Bollywood is yet to figure out how to tackle it.

So Where Does The Problem Lie?

Firstly, we are yet to figure out the differences between sequels, franchises, remake, reboot, and spin-offs. All these concepts are different fro each other and thus, require different treatments. Putting a ‘2’ in the title of an already successful film serves no purpose other than confusing the audience, who by now understand the differences, courtesy of increased exposure to global cinema.

One cannot just simply call it a sequel if the story of the first film is not being continued from where it was left and picking it up from there. Consider Kahaani 2 which was broadly understood by audiences as the sequel to the blockbuster hit Kahaani, although shared the backdrop, the female lead and a faint essence of the first movie had nothing to do with it when it came to the narrative or the story. The merit of the film is not being debated here but the misleading nature of the title that at the end of the day, disappointed the audience as they went to the theatre not to see a story of the same genre but the tale of Vidya Bagchi that they were gripped by in the first movie.

The Housefull and the Golmaal series, if we can call them that, are also a good example of this confusion. Apart from the director, a few actors and a genre of brainless slapstick comedy, the movies had nothing in common to share the same title and ride on the popularity of the first film.

This is exactly what Gangs of Wasseypur 1 and 2 got right and thus made an unparalleled success story when it comes to sensible and interesting sequels.

When Sequels Start To Haunt The Memories Of The Originals

Apart from this common confusion, the content of these supposed sequels are also, without fail, weak and tarnish the fond memories of the first film. A major reason for this sad trend is the widespread insecurity of directors. Hindi films have a tendency to crowd the film with every creative idea that one can come up with and cram them as densely as possible in the time span of 2-2.30 hours. In the process, there is little left to be said in the second instalment which then sail as far from the central idea of the first film as possible like a directionless boat in the eye of a sea storm.

Take the example of Dabaang and Dabaang 2. Not that the first one had much of a story but it successfully told a tale of the heroism of a Robin Hood-ish police officers and his antics. The ending of the movie left nothing unsaid and left no room for a second instalment. As a result, Dabaang 2 felt like an unnecessary stretch, much like your old uncle who does not stop with his tales of yore of his heroism. It was entertaining when you heard the first story, but now it is just a chewing gum that has lost its flavour but he still refuses to spit it out.

The Rare Chance Of Truly Making A Sequel Stand Out

To give credit where its due, this is exactly why Tanu Weds Manu Returns was a successful sequel, surpassing even the first one in its popularity and content. It had a story that could be continued and was interesting enough to be continued. Baahubali and Baahubali 2 should also be credited here for not trying to say everything it wanted to say in the first part itself and risking a major cliffhanger, that kept the interests of the audience alive.

Another issue with sequels is our inability to treat subplots carefully and giving them enough attention. Films generally tend to bank so much upon the central idea that subplots, which actually has a possibility to stretch the narrative, is treated as an afterthought which makes the possibilities of a worthy sequel extremely feeble.

For example it would have actually been interesting to see what Jagdish Tyagi from Jolly LLB would do with his newfound fame and respect while keeping his Meerut attitude intact, rather than bringing a story that toys with the same idea and adds some star power to it by casting Akshay Kumar and coming up with a Jolly LLB 2.

To Give The Tale Something That Was Missing Before…

There is also a growing tendency of sequels becoming preachy and moralistic. Due to the success, the makers feel that they are obligated to propagate a message through the already popular character. For example, Munna from Munnabhai MBBS was a lovable goon that everyone adored, but the second instalment pushed him from ‘Dadagiri’ to ‘Gandhigiri’ which was in no way what the first film set out to be.

Talking about sequels it is also noteworthy how comedy is one genre that has the highest number of sequels and most of them are an eyesore. Comedy as a genre is any way tricky and Bollywood is still trying to find a solid ground when it comes to out and out comedy films. As a result, all the Golmaals, Housefulls, Kya Kool Hai Hums, Mastis and Dhaamals feel like stale and uninspired copies of each other. It is also interesting how most of these franchises work with certain actors who are basically playing the bland and blander versions of their seemingly funny acts in the first instalment. Also, instead of writing a new film and re-cycling old jokes, makers need to focus on coming up with fresh content that is sensible and funny.

Sequels Vs Remakes – Where Does The Line Come In?

Another subcategory of sequels is the remake genre. The rule is simple, what works in one era has little chances of working in another. Of course, there are successful remakes such as Don, which stylized the old classic and played it out in a modern setting, but then there is also Judwaa 2, which tried to emulate the success of the 90’s blockbuster. What it failed to take into consideration is that the taste of the audiences have evolved over the years and the Hindi film industry has come a long way from the loud pot-boilers, that were a rage in the 90s. At this point, films like Judwaa 2 offends a sizeable chunk of cine-goers, who demand sensible entertainment and prefer 90s throwbacks to be confined to old pictures on social media and subtle fashion trends.

It is not that sequels or franchises are a bad idea, it is just that, for making a sequel that is worthy of the first film one needs stronger writing, solid characters with equally solid character graphs and most importantly it cannot be an afterthought because your marketing team wants to cash on the original one, but rather a clear idea and intent of making a sequel or franchise right when the first film is conceived.