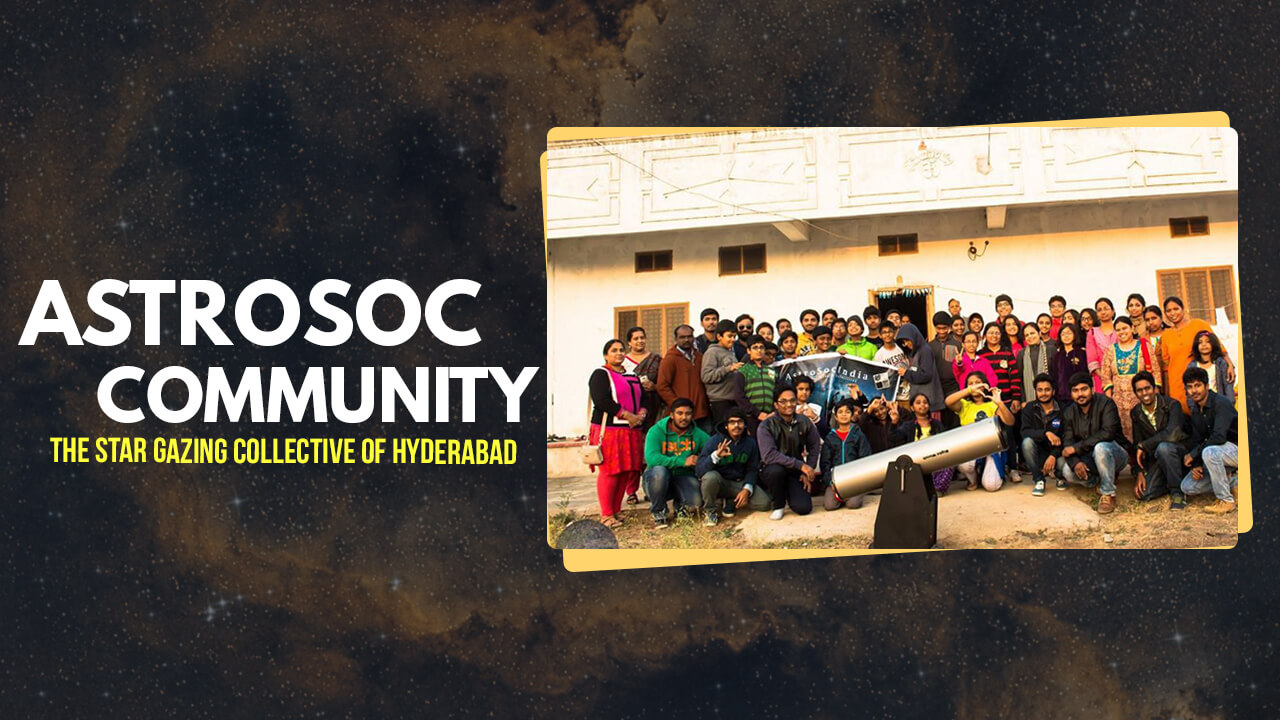 They twinkle, they sparkle, they inspire awe and make nights romantic. Whether it is nursery rhymes or some of the most popular romantic poetries and songs, humans have been engulfed by the mysterious beauty of stars forever. From snuggling under a blanket on your terrace to buying fancy pieces of equipment, star gazing has developed from a romantic leisurely activity to a full-fledged special interest. The fun is definitely doubled when you have somebody who shares your love for star gazing and to guide you through the celestial mystery. The city-based special interest group, AstroSoc is doing exactly that. Run by the passionate Harsha Pandula, AstroSoc is a community for people who love star gazing and are serious about it.

Talking about how Astrosoc came into being Harsha says, “I’ve always been fascinated by night skies, ever since childhood. I’ve been reading extensively about astronomy, space research and much more. However, I couldn’t pursue the same for obvious reasons such as education, work. Back in 2013 when I was working for Amazon I found some free time and decided to join an astronomy society in Hyderabad and began looking. However, to my, disappointment there wasn’t a single group that was active. Hence I decided to go on field-tours all alone and started posting pictures of the same. Soon I started getting a good response from people who wanted to join me. This is when I decided to start a society (currently Outreach Department) and thus we began.” But is star-gazing basically amateur Astronomy? The pro has the answer for you. He says, “In my opinion, there is a thin line between Star-gazing and Amateur Astronomy. Stargazing generally refers to Unaided observations of the sky and particular celestial events such as meteor showers. Star Gazing doesn’t need any special skills or knowledge and fancy equipment.” Amateur Astronomy involves being able to track the night sky, locate celestial objects, point your scope to the object in reference, study various phases of the object and know various concepts related to astronomy and much more. Compared to other Indian cities such as Pune, Delhi or Mumbai, star gazing scene in Hyderabad was clearly lagging behind. But Harsha is positive that the trend is picking up the pace and AstroSoc has been a major catalyst to this trend.

“Star-gazing is popular with corporate audience wherein they love to attend field trips, camp under the stars and refresh over the weekend. While it may not exactly be a hobby to them they enjoy the experience nevertheless. Hobbyists come from schools, colleges, and educational institutions. Audience from these categories come to our field trips to understand and study concepts related to astronomy and learn more on operating telescopes, Photograph night skies, deep sky objects and study them. From 5 years to 60 years, we have people from every walk of life at AstroSoc” he informs. To make stargazing into a legit special interest activity, AstroSoc is leaving no stones unturned. The AstroSoc Outreach Department organizes field trips that are a subtle blend of star gazing, observation sessions, advanced discussions, seminars on astronomy related concepts, celestial bodies, nature camping, eco-tourism and weekend getaways. During the period of Monsoons when field trips are not possible they host various workshops like telescope making and nano-satellite design. They also host seminars during this period.

The most remarkable thing about AstroSoc’s ventures is their commitment and far-reaching approach to what most people consider just another ‘time-pass’. “We boast of state of the art equipment in both our departments from telescopes, tents, portable projectors, trackers, astrophotography equipment for Outreach Department related activities. We are also currently working on a Radio Telescope which will differentiate us from all astronomy clubs in India. Radio telescope allows deep field research and will be a part of our activity soon. This Radio telescope is being built in association with ASD by AstroSoc,” he proudly shares. Apart from this AstroSoc is also involved in several other projects related to astronomical equipment and is competing on a global scale. “We are just getting started and are hoping to scale up our products and services and funds for research and development is the only factor that is slowing us down considerably,” he adds. Making It More Inclusive And Accessible

However, one drawback for pursuing stargazing as a hobby is probably the expense it incurs. AstroSoc is thus trying to make sure to make it more pocket-friendly and thus more accessible and inclusive. “It sure is an expensive hobby as equipment required doesn’t come cheap. This is the main reason why the Applied Sciences Department was formed. We are working on precision astronomical equipment which can be low cost and affordable. We have a dedicated team in ASD working on Astronomical Precision Devices,” Harsha assures. Cosmic Memories That Lasts A Lifetime

In a fast-paced world like ours, star-gazing might seem like a leisure that only few can afford. After all, after a busy week why not a party till you drop with your friends or snuggle up with a coffee and a book or Netflix? What special thing does AstroSoc offer? Harsha answers, “An event with meteors streaking across the skies which compels people to stop doing everything else and stare at the skies in unison or kids running to their parents, excited on seeing Saturn or some other celestial object from the telescope. Nothing beats the sight of awestruck faces, no matter how old or young they are. One experience with AstroSoc and they take with them memories worth a lifetime.” Related posts:
VoxTalks With Dhruv Sehgal Who Has Got Some Truly Incredible Things To Share
[VoxSpace Selects] Review of Strangerssss : National Pride Comes With A Responsibility To Uphold It
[VoxSpace Life] Mizo Peace Accord : The Story Behind India’s Most Intriguing Peace Initiative