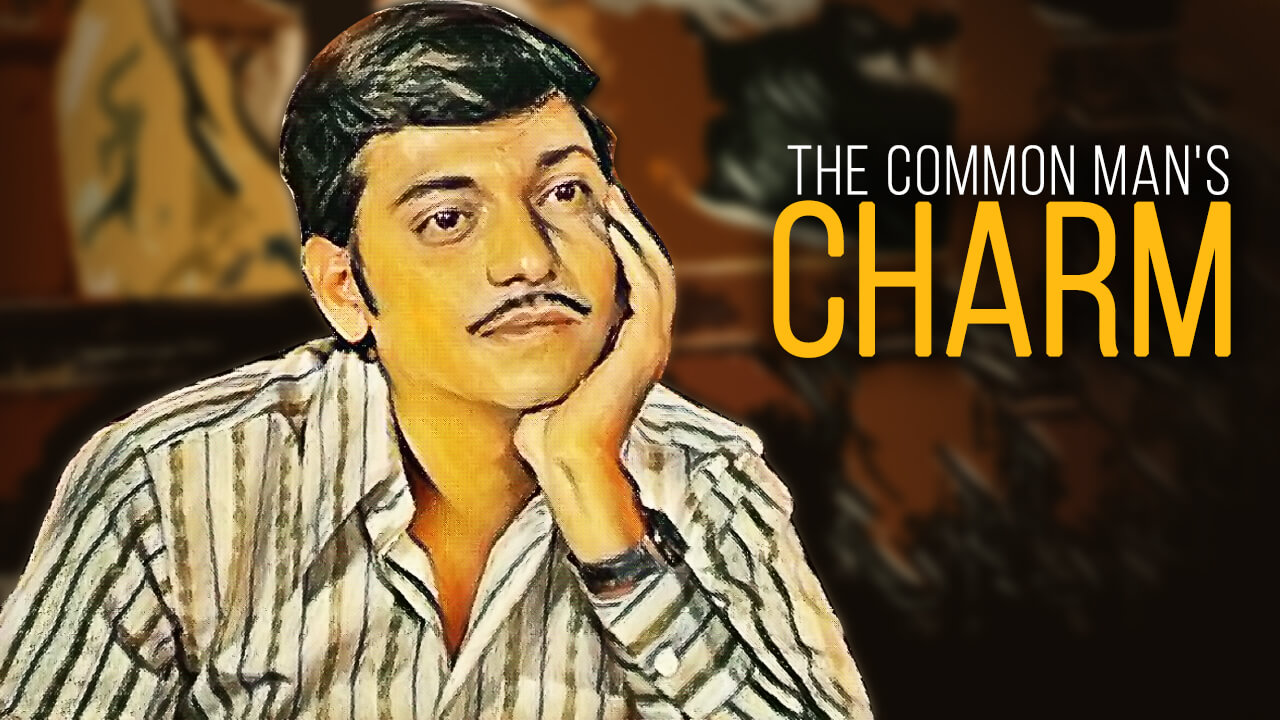 Before Arvind Kejriwal made the Aam Aadmi Party and vehemently portrayed himself as the pallbearer of the “Aam Aadmi” or common man in the nation’s capital, the sobriquet of “aam aadmi” was associated with an actor who emerged as the more or less true portrayal of any common man on the silver screen during the 1970s-80s. Amol Palekar brought the common life to a celebration.

A mild-mannered bumbling man, who resides in a huge metropolitan city, goes in search of jobs and love, in that particular order. Amol Palekar’s characters were the ones with whom you could relate to, instead of the angry young man who bashes 10 goons. I have no qualms on the latter but very honestly, even on a good day when you are feeling all spruced up; you wouldn’t stand much of a chance against 10 people ganging up on you. Therefore, Amol Palekar was more relatable in a subdued way, where emotions flowed in mild-mannered advances and the boss in the office made you curse under your breath, but you ended up putting up a big smile. After all, this is the job that pays the bills and brings food to the table.

Palekar, who had a successful theatre career, made his debut in 1971 with a Marathi film titled “Shantata! Court Chalu Aahe.” It was the movie adaptation of the play “Silence! The Court Is in Session,” which had been written by the thespian Vijay Tendulkar. However, he made a bigger splash in his Hindi debut in Basu Chatterjee’s  “Rajnigandha” based on “Yehi Sach Hai,” written by noted writer Manu Bhandari.

The Face Of A New Story Movement

Amol Palekar with this movie emerged as the face of the new story movement in movies that was taking place during that time. Making a sharp exit from mindless potboilers, filmmakers were drawing inspiration from novels that were based on urban settings and had a middle-class protagonist, who is not a rebel, but a survivor of the rapidly changing urban jungle. They were the reminders that India was slowly transitioning from its colonial past and taking its baby steps of emerging as an independent economy. It was a time of finding jobs and exploring the subject of love in a realistic way, rather than via typical song and dance routines. Therefore, the plot brought forward a Deepa, who has done her M.A and is looking to finish her PhD, who is prepping up to marry Sanjay played by Palekar, who is going through his own hiccups to get a promotion in the bank he works.

The antagonist in the movie is Navin, who is Deepa’s former flame and how a chance encounter with him gets the ball rolling. Now, if this was a typical pot-boiler you would expect high octane drama and overtly dramatic scenes but that’s the beauty of “Rajnigandha” – its feet are planted firmly in reality and the plot proceeds accordingly. This also made Palekar, the face of the common man, stuck in his own web of thoughts and trials.

The movie was a hit and if there were any doubts if this formula would work, it was quashed by Basu Chatterjee’s “Chhoti Si Baat.” The movie is significant for several reasons. After a long period of time, Bombay was simply getting to be Bombay and not a place that needs salvation and has a continuous clash with the upper class and the rest. The crowded city made an excellent backdrop for the middle-class man Arun Pradeep, played by Palekar, who is extremely shy and doesn’t have the inflated machismo, a staple of silver screen stars. He’s continuously pushed around, overworked and is a mere shadow of a man. However, things start picking up the pace when he meets Prabha on the bus stand and falls in love. The antagonist comes in the form of Nagesh, who is modern and knows how to charm people, in contrast, Arun appears as a lacklustre bumbling simpleton, who’s always falling behind.

Help comes in the form of Colonel Julius Nagendranath Wilfred Singh, a man who teaches him the ropes of how to woo Prabha. It’s a story with a lot of heart and is based on the 1960 British comedy “School for Scoundrels” with the “Secret Life of Walter Mitty” thrown in for good measure.

The Man Who Felt Like One Of Our Own

In “Gharaonda“, the struggle is for a “makaan,” a place to call one’s own in the overcrowded city, where Palekar and his lady love, in the movie, can make their own world. The song in the movie reverberates the pathos of the city and those stuck in it –

A common man’s hero with common problems is a trope that gets repeated by Palekar time and again in his movie choices and it suits him perfectly.

Another gem is the movie “Baaton Baaton Mein” that revolves around the Christian neighbourhood in Bombay and has Amol Palekar and Tina Munim taking the story forward with a well-paced narrative. It involves salaries and a family’s search for a suitable husband for their daughter, who’s recovering from a heartbreak. Tony Braganza aka Palekar again backs it up as a man, who hesitates with love and marriage but eventually emerges as a content person with Munim confessing her love for him.

The final piece of the puzzle that completes this discussion is “Gol Maal,” the movie directed by Hrishikesh Mukherjee and not the popular no-brainer franchise, which spews sequels. The movie has Ramprasad Dashrathprasad Sharma growing through hoops to retain his job by appealing to Bhavani Shankar, played by Utpal Dutt. What follows is a laugh riot ensued by the interactions of Palekar and Dutt. The circle becomes complete with the inclusion of this movie, the goal of ‘Roti, Kapda and Makaan‘.

Palekar rides on a movement at a time where the breathing space for alternative cinema or parallel cinema was much wider and they had more wiggle room than they have now. After all, it was the highest grossing movie of the year it was released in. So, when you walk in a movie that challenges your perception of reality, come back home and put on a Palekar movie, so that, you have something relatable on your plate.