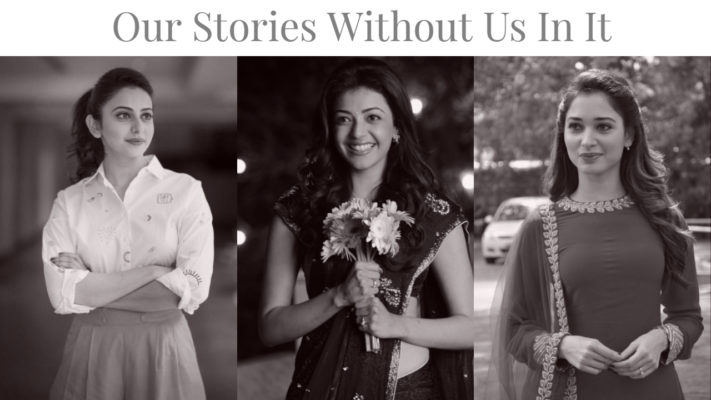 Stories With Ladies I Can’t Relate To

Movies are fantastic. They are a part of life. Although there’s a large scope of igniting our creative fantasies and creating fictional worlds through cinema, most of the movies comprise our stories, of ‘normal’ human beings. These stories are intended to make us feel involved and see ourselves in the stories and so, are presented with utmost conviction on the large screen. The actors are impeccable almost all the time.

But, I have a problem. Even though the story is aimed at being relatable to a normal layman, most of the movies fail. One of the biggest reasons for it is unrelatable characters. Particularly those characters which are supposed to be playing the lead role in conveying the story- the leading ladies. Here is why I can’t relate to most of the leading ladies of Indian Cinema.

First of all, the characters itself are written in such a linear form. There are very few movies in which the lead actress has something to do, other than falling for the hero. From the few famous Bollywood films and a lot of South Indian films that I watched, the ‘heroine’ of the film is either too bubbly, cute, childish and makes silly jokes. This is adorable/too difficult/weird to handle, thus making the noble act of wooing her the only goal of the hero.

Other character tropes comprise the actors with the noble trait of making the hero realize the value and beauty of his life, parents, goal. Or a helpless lover who needs to be rescued from the evil brother-in-law or a villain. It’s become so rare to find female characters that have a problem and are trying to resolve it without waiting for the ‘hero’ to magically appear and help them or have conflicts and layered personalities. Therefore, there are so many dimensions of the character that are unexplored, making it repetitive and unrelatable after a point.

When was last time you watched an actress with frizzy hair and without kajal? Can’t remember right! Me neither. I have a huge problem with almost anyone in the film who looks like they are going to a party. I don’t understand why just because it’s a film the people in it need to look presentable always and stand apart. If it’s a story of a middle-class family, how is the character’s hair done perfectly almost every time she appears on the screen?

One of the most important things in a film is its believability factor. If the characters look exceptionally beautiful or unreal, how does the director expect the audience to believe in the characters? Even the eyelashes are fake. No middle class or even upper-class person put fake eyelashes on every day. Not all the women get their arms and legs shaved every day. I have not seen a single actress with hair on their arms or legs, which by the way is absolutely normal. Everything and everyone is perfectly groomed, fair and unrealistic.

A Few That Stand Apart

Amidst this pool of uncomprehensive relatability of leading ladies, there are a few films that stand apart. One of the best examples of such films is C/o Kancharapalem. The characters are so true to their age. There’s no unrealistic flawlessness attached to them. Radhika and Lakshmi’s characters from the film Jeans are also a couple of the finest examples of relatable and goal-driven characters. Aishwarya Rajesh from Kaka Muttai looks just the way she’s supposed to, owing to the film’s story and nature of the characters.

Vidya Balan from Kahaani is another beautiful example of having a realistic appearance on screen. In Sammohanam by Mohanakrishna Indraganti, the character of one of the leads is so well written that despite it being the role of an actress, it seems so relatable. Films like Bhagmathi, Awe, Raazi etc are a few more films that are feeding my hope to see more story-driven films with incredible ladies in them.

In conclusion, we are seeing films which are if not completely, at least a little relatable with sensible character arcs. But there are so many more films that still glorify unrealistic characters. Hence, though I am glad that the change has begun, we all know there’s a long way to go.

Related posts:
[VoxSpace Life] 7 Cultural Spaces In Hyderabad You Need To Check Out Right Now
Review Of Ranj (Slow Burn) : A Keenly Observed Tale Of Simmering Despair Of An Urban Immigrant
Indigo Airlines Staff Manhandle A Passenger And Literally Throw Him On The Road In This Disgusting V...