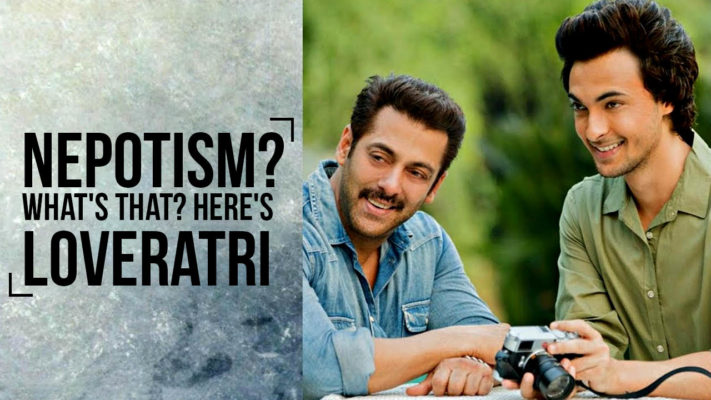 What do you need to be an actor? Well, the obvious and boring answer is that you need to learn acting skills, go through gruelling rejections, have a brush with the casting couch, get your ass whooped in theatre etc. etc – all this the tinsel town people will have you believe, when they are making speeches while receiving some honorary degree from a university, where real people spend years to earn a proper one. There is, however, a shorter way aka nepotism.

Wait! Is this going to another nepotism rant? I have heard enough. Every year, this pops up, when some star-kid, star-nephew, star-servant, star-maid, star-arm rest, star-candy, star-chocolate gets a movie for themselves. Geez! Original content, please! Well, this is as well, and this didn’t rise out of Dhadak. Rather, it rose after watching the trailer for Loveratri. Now, I am a practical guy; I understand that in the world we live in, star-kids will get their first big movie and then everything will fall under box-office collections. However, there is this one man, who doesn’t give a rat’s behind. He doesn’t care about critics; he doesn’t care about the audience. At 52-years-old, he is still giving blockbusters and launching people with the same ease that the autowallah refuses you with when you ask him to go by the meter.

Salman Khan has a history of pulling up actors out of nowhere and as the law of nature grabs the weaklings by their high-heels and pulls them down after box-office bombs, he, without being phased out, repeats the same course action. He runs, what you can call, the “deluxe version” of “Being Human” foundation along with the regular one; made solely for retired stars, star-kids that the industry doesn’t want to touch with a five-feet pole, random strangers walking down Bandra and yes, those, who marry in his family. I am not saying Aayush Sharma may not be the next big thing! But right now his credentials are “I married Salman Khan’s sister” and “My grandfather is the man who was in the first telecom scam in India.” Yes, if you didn’t know that already, a little bit of trivia for you – his father is Anil Sharma, who is the son of Sukh Ram, who was the Telecom Minister in P V Narasimha Rao’s Cabinet and is one of the main accused in the famous 1996 telecom scam (This was the country’s 1st telecom scam).

We will mull on that when the time comes. Loveratri makes its way to the theatres to show nepotism in full display. However, this is a look back on an emotional journey of nepotism, misadventures, meaningless cinema, and cardboard cut-outs that Salman Khan has graciously mentored, promoted, gifted movies and along with that enriched the trash bin of the Indian film industry.

When you can’t afford Prada, you try to get brands that are cheaper; you don’t go out in the knock-off market and come home with fake Prada and boast about it, that’s just wrong. However, Salman Khan, like his movies’ defied logic, “discovered” Sneha Ullal, someone whose resemblance was so uncanny with Aishwarya Rai Bachchan, you would wonder if she was made in a Chinese sweatshop with her picture as reference. Salman Khan paired up with her in Lucky: No Time for Love. (Subtext: “Because I was busy killing deer and driving cars recklessly”) This was way back in 2005 and like the movie, she just vanished in the thin wind. We get to hear from her sporadically, like the common cold, going through personal ailments, making appearances here and there. Nobody misses her, because she shouldn’t have been there in the first place.

Amitabh Bachchan has been through a lot; he understands that there are certain mistakes in his career that he just has to sweep under the rug and keep moving on to good films; so that, they are never mentioned; for example, RGV’s AAG and Boom. Incidentally, this was also Katrina Kaif’s debut film. The scene was a cinematic genius. Gulshan Grover gets seduced by Katrina, Amitabh by Padma Lakshmi and both the ladies are banking on their bosom to get the point across. If it was anyone else, this would be a nail in the coffin; however, Kaif was picked up by Salman for “Maine Pyaar Kyun Kiya?”  and the rest, as they say, is tinsel town history. The mentor and the mentee are often at logger’s heads, but let me tell you, as long as Tiger Zinda Hai, they’ll all be fine.

Once you take a snort of drugs, you get confidence – as per the philosophy preached in Sanju. So, Salman Khan went into overdrive with his Aishwariya obsession with Sneha Ullal and then sobered up. But the hangover persisted and with that came Zarine Khan, who was going to be a part of Salman Khan’s magnum opus Veer. If Sneha Ullal was inspired by Aishwariya, Zarine was a Katrina look-alike. Veer was a sheer disappointment and although Bhai survived it like he survives everything under the sun, Zarine went spiralling down to movies that were the dregs of the industry and all major flops, barring one or two exceptions. She’s still around, and the rumour mills say she is looking for another jumpstart from Bhai.

While we are talking about franchises, filmy connections and Salman Khan, credit should be given where credit is due. Salman Khan is one, who never shies away from doing favours to old family connections. So when “Khamosh!!” Sinha was looking for someone to launch his daughter; there was no better door to knock than Salman Khan’s. Dabbang and Dabbang 2 are the highest grossing movies in her list and that works for her completely. Now, I hear, Dabbang 3 is already scheduled in the future.

Giving them separate paragraphs here would be an insult to Salman Khan, because only he knows how to up the ante. So, when two old friends, who have kids that are old enough to have their own movies come to someone who is not even married yet, magic happens and you get a dual debut in a remake of a Jaggu Dada’s movie with Salman Khan crooning “ke main hoon hero teraaaaaaaaaaa” all in a day’s work. The emotional support given to Sooraj Pancholi, accused of Jiah Khan’s death, was just a by-product. All in the family, all in the name of love and friendship and all things that make no sense, when you try to find a reason in the entire hot mess of affairs.

When he is not discovering people or gifting star kids to the industry that no one wanted, Salman Khan, similar to Oprah, throws himself in changing the lives of people that are going through less privileged times. Govinda needs a comeback, after which he will terrorise us with a movie, where he will play a young hero? Let’s make Partner.

Do we need to size up an obese individual, so he can fulfil his destiny of acting in Chetan Bhagat novels when they are made into movies? Let’s work on Arjun Kapoor.

Do we need a music director with a broken nose and harbouring dreams to become an actor? Ladies and gentlemen, I give you Himesh Reshammiya. Bring back Bobby Deol from the land of the death and give him the role of a zombie in a movie? Here’s Race 3. And the list goes on. Also the philanthropy inside his house – with an umpteenth attempt to revive the careers of his brothers and giving an expensive wedding gift, an entire frigging movie to his brother-in-law – never stops.

Salman Khan is a misunderstood genius. While people, nowadays, get bothered by nepotism and the blah blah of mere individuals like film critics, indie movie makers, movie makers that win awards but don’t get releases or even if they get releases and are running successfully, get uprooted by Ek Tha Tiger from the theatres (Backstory:  Anurag Kashyap and the movie was Gangs of Wasseypur, yes holy moly GANGS OF WASSEYPUR), he just keeps on hamming it. He is the one, who laughs his ass away when Nawaaz, after years of grinding in the industry, gets to say in a web series, “Kabhi Kabhi lagta hai apun hi bhagwan hai” because he’s been doing this god business before Nawaaz even landed in Mumbai.