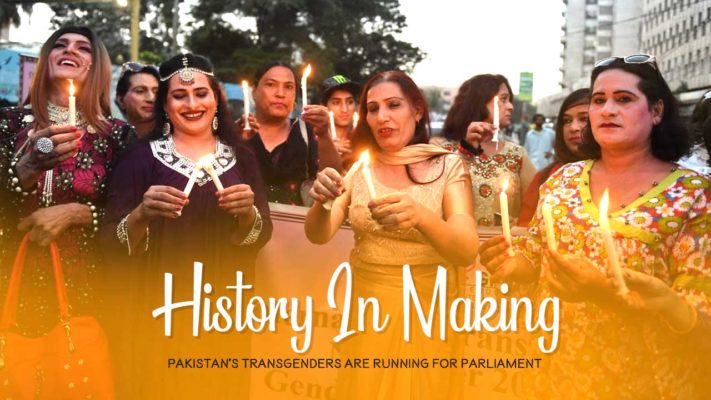 A few months back, Pakistan passed a bill that made liberal human activists all around the world honor the decision with gaiety, the historic Transgender Rights Bill that recognized transgender as rightful citizens. The bill subsequently conferred upon them the freedom to choose their own gender, which would be therein be imprinted on every official document like ID or driver’s licenses. All over the nation, thousands of people belonging to the transgender community toasted to their newly attained rights and power to oppose discrimination and public slander. Pakistan saw the burgeoning of Marvia Malik, the first transgender news anchor in the land of the spirituals and chaste, as its name Pakistan signifies. I am sure many prodigies rose above their surrounding of degeneracy, belonging to a community that is historically as old as the Indian subcontinent in itself. Writing about their stance is of tremendous significance since following the demise of Muhammad Ali Jinnah, his successor to the position, General Muhammad Zia-ul-Haq gave rise to a severe crackdown on human rights, and consequently, the condition of women fared the worst during the period.

The Story Of Willpower And Noncompliance

Amidst the prevalent belief that transgender and their existence is nothing short of a contagion, an immediate threat to mainstream society and culture, the news of 4 transgender candidates raged an unprecedented storm. The general atmosphere in Pakistan prior to the election is charged with political tension and preconceived brutal attacks leaving blood running through the streets, mixing with dust and gunpowder. You have to bow in front of the courage and determination demonstrated by the remaining four people who have braved backlashes, stigma, and other sorts of inadequacy in their way like acute shortage of funds.

Among the candidates Nayyab Ali and Nadeem Kashish have previously appeared in a number of magazines, newspaper tabloids like and broadcasting channel FM Power 99. Ali had run a literacy programme spanning over four months for the transgender community, she has the deep political knowledge and the importance of the same within her community, which will grant them authority over the political institution, a basic fundamental right of any human being. Ali will contest from Okara, a shy and humble human being have kick-started her campaign on social media channels and by partaking in a number of social works. The student of Botany dreams of establishing proper sanitation, healthcare facilities, and water reservoirs on coming to power.

Nadeem Kashish had taken her campaign to the streets long back, throngs of people gathering and cheering for her victory is her personal victory amidst the odds and discrimination from which she is contesting. The immense amount of liberty that this 43-year-old make-up artist is enjoying is comprehensible from her mannerisms and forthright manner. The freedom from socially constructed sexual norms of transgender people is perhaps best reflected in these campaigns, with the bold marches of candidates demanding to gain political power and authority.

Kashish has been actively involved in the election, and has busied herself with activities like pamphlet distributing, engaging in conversation, and winning general support in a land where a common man receives limited freedom in society and social participation; a land torn by extremism, religious and educational backwardness amongst the masses. Pakistan has seen the periodic eruption of violence and certainly, the election stands for the remaining shreds of the democratic parliamentary republic that Pakistan was meant to be. Creating dialogues and conferring political powers on people belonging from marginalized, third gender community is an act of bringing them into the general discourse and is a moment of pride for the country which has seen a different kind of malevolent misogynist patriarch for years.

Pen Over Sword To End Anarchy

Transgender people in the land of extremists are in a state of constant dread and anxiety, they are not spared of stigma and brutalities and a lifelong burden of dishonor. The problems of untouchability, superstitions, and religious sentiments persist in every sphere and many of them are deprived of the basic rights of being a human being. The sheer discrepancy between their biological sex and gender perceptions push them even further to the margins of society, which aggravates due to other social factors and most importantly lack of government initiatives to tackle their ordeal.

In South Asia the problem is severe and reportedly, the community faces neglect in medical healthcare, education,  government identification cards, lack of affirmative employment policies-the few created are however insufficient for the majority and of course accommodation problems. During the British regime, the persistent effort to eradicate their community or gender unconformities is chronicled in Millata and Jang, the Criminal Tribes Act which came into from 1871 split the community into two absurd categories- “respectable” and “suspicious”. The law immediately threatened the quintessential identity of the eunuchs, their liberty of choosing gender identity and norms by exterminating emasculation. The panic surrounding gender and sexual identity during the colonial era contributed to the agonizing existence of the transgender community.

The story of 13 candidates who originally stood for contesting in the election and their gradual elimination is yet to see light. However, Ali and Kashish along with two other electorates will definitely remind the world of Pakistani women’s rights activist Nighat Saeed Khan, who challenged the brutalities that the land had inflicted on its women in the name of law and authority.

Habib Jalib writes, as a gesture of solidarity for these women reflecting the socio-political scenario of his times “American aid gave us wheat, as also their deceit/. . .we’ve suffered their conceit.” He would have been beaming with pride today.