16 Captivating Things About Libra Man That Make Him Dangerously Addictive..!! 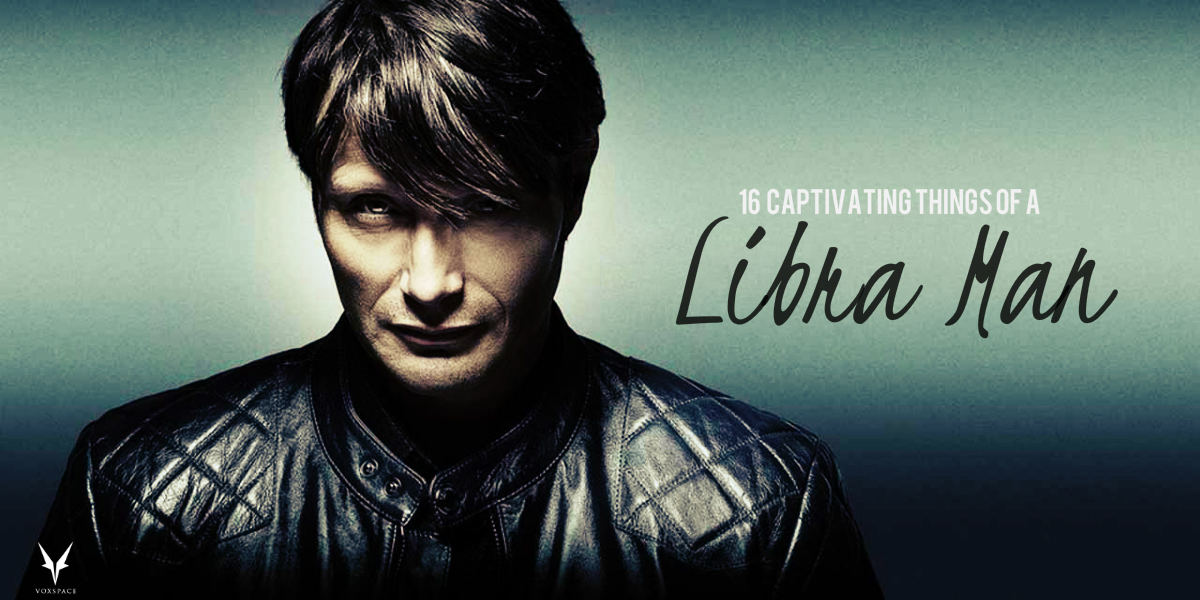 The Roman writer Mahilius once said that Libra was the sign “in which the seasons are balanced”. Both the hours of the day and the hours of the night match each other. Thus why the Romans put so much trust in the “balanced sign”. Going back to ancient Greek times, Libra the constellation between Virgo and Scorpio used to be over ruled by the constellation of Scorpio. They called the area the Latin word “chelae”, which translated to “the claws” which can help identify the individual stars that make up the full constellation of Libra, since it was so closely identified with the Scorpion constellation in the sky.

Now having said that, what exactly sets them apart is still a mystery. Let’s have a look shall we :

1. They can be a Shameless flirt and they are blessed with an Irresistible Lazy Charm : Once a Libra has his eyes set on someone he’ll attempt to swoon her until he finally wins her over. Even if he’s dating someone he might have a hard time controlling his flirtatious nature. In fact, the typical Libra face reminds you of nothing so much as a box of bonbons. Or a sugar cookie. Some of them look like human lollipops, or a caramel sundae topped with rich, whipped cream. Even though they love the act of flirting and engaging with the opposite sex once they win a girl over and commit to her it’s very rare for them to stray. They’re very loyal and dedicated partners.

3. They love Socializing and have a knack for making People feel comfortable. Libra men love hosting social events and they’re great at bringing people together. They’re positive, friendly, and make it a point to connect with everyone in the room.

4. They’re both Sensitive and Masculine at the same time. While Libra men love indulging in their masculine side they also can be incredibly sensitive and responsive when the situation calls for it. The Libra character is made up of just about equal parts of kindness, gentleness, fairness, plain cussed argumenta-tiveness, stubborn refusal to capitulate, philosophical logic and indecision.

5. They rarely lose their Temper. It takes a lot to make a Libra man mad. Notoriously cool and collected, a Libra guy takes a laidback approach to life and rarely lets anything really bother him. Libras like to stand back and watch situations play out before getting involved. Sometimes this can be very frustrating for someone who wants Libra to take action and Libra remains seemingly detached.

6. It can be super hard to actually Break Up with them. Trying to escape from a bear trap is a cinch, compared to liberating yourself from a Libran man. If you try to run, he’ll persuade you to stay with such logical, intelligent arguments you couldn’t hope to top them unless you graduated from Harvard Law School. In addition to using his unmatched reasoning powers on you, he’ll turn so sweet and gentle you’ll forget the frustrating inconsistencies of his nature that upset you before.

7. They are Just and Reasonable without being boring anywhere. Libras are all about fairplay and justice. They’re great diplomats. Any sense of dishonesty or unfairness from a potential significant other is the easiest way to lose his interest.

8. They always weighs both sides before making any decisions. The symbol of the scales Libra’s greatest attribute lies in being able to mentally weigh both sides of any situation before coming to a final decision. The Libran general, with his qualities of balanced, harmonious judgment, makes an excellent strategist, and thoughtful planning can win a battle before it’s fought.

9. They have a deep appreciation for creativity, natural beauty, and the arts. The great thing about Libra men is that they can tend to be extremely romantic and creative. You might find out that during highschool or college he played in a band or took classes in sculpture or you might discover he has a knack for writing hilarious short stories. They typically have artistic or creative talent somewhere and they’ll always be able to find the subtle beauty in life’s smallest moments.

10. They seek out balance and Elegance of form. Libras truly dislike anything that is too overwhelming or smothering. They are the opposite of an all or nothing personality – they never go to extremes. Libras can’t ever have too much of something or they’ll pull away. They like to be surrounded by beauty, especially in their homes, and have a refined, modern, and expensive taste. Most Librans have a fantastic ability to concentrate and to ponder deep subjects. They are born with an affection for books, and such a respect for the printed word that many of them scorn paperbacks. They feel it’s not a book unless it’s a hardcover, and smells and feels like a book. You’re almost sure to find an extensive library in every Libran home.

12. They have an unparalleled Eloquent taste in everything artsy

They love the harmony of sounds, colors, poetry and the proper use of words, both written and spoken. Rarely do they escape the influence of the arts. A Libran is a gentle, tender lover of all that’s good and clean and lovely underneath whatever image he may project when that fairy godmother raps one side of his scales. He’s an artistic soul at heart, who enjoys spreading the soft blue and pastel shades of Venus at parties and cultural occasions. Soft light, mellow music, interesting conversation, good food and fine wines turn him on. His mind has both the brilliance of the diamond and the smoothness of the opal.

13. More often than not, you are dealing with a Perfectionist here To truly understand Libra, you must understand the riddle of the scales; one side heaped high with October’s vivid, golden leaves, suggesting brisk, autumn weather- the other side holding sky blue bunches of shy violets, drenched in the fresh scent of April rain. When the scales dip, bright optimism turns into silent panic, weighed down with lonely depression. When they balance, they produce a perfect harmony between his rich, crackling intellect and his affectionate, sympathetic heart. The seasons hold Libra’s secret. Winter is too cold for him. Summer is too hot. He must blend them both into a perfect fall and spring.

14. Lastly Ofcourse – There’s that one thing he will trap you with – The Libran Smile Then he’ll smile at you and something will happen inside. Your heart will turn over. From that moment on, the battle will be lost. His dreams will be your dreams, and nothing will matter so much as making him happy. You’ll seek that smile and need it to survive the way a thirsty traveler needs water. Only a really hard-hearted Hannah could resist a Libran smile, and she’d have to summon all her determination to avoid being magnetized by its purity. The Libran charm is not like the hypnotic persuasion of the Scorpio. The attraction of Libra is logical and real, not supernatural in any sense. There’s no black magic about it, just common sense submission to his heavenly aura.

15. The Romance Ladies Start here..And He’s already won you over. The word love and the word Libra are practically synonymous. Libra invented romance, and refined it to an art with even more finesse than Leo, Scorpio and Taurus, which is saying a lot. The delicate strategies of Cupid are inbred Libran talents. He’ll use every trick with casual ease and seldom fail to get the girl. However, once he gets her, he isn’t always sure what to do with her. And Then he ends up doing what he wills.

16. If you aren’t yet convinced – He is basically a master of love making out there. Since the art of love-making comes so easily-and shockingly early-to the Libra male, and since he almost always wears the crown of success on his romantic excursions into love’s jungle, he gets tangled up with a lot of clinging vines. His love for sex is not driven by physical aspects but psychological. He is the kind of man who is very open to challenges due to the fact that all women are different and they will each have their own preferences.

And well there you have it. Go find your Libran as soon as possible. Of course do have a look at the compatibility charts cause there’s no turning once you get to him. And yes all of the above 16 are Libra men. Now you know right.

108 thoughts on “16 Captivating Things About Libra Man That Make Him Dangerously Addictive..!!”