The Most Accidentally Famous People On Earth And Their Stories 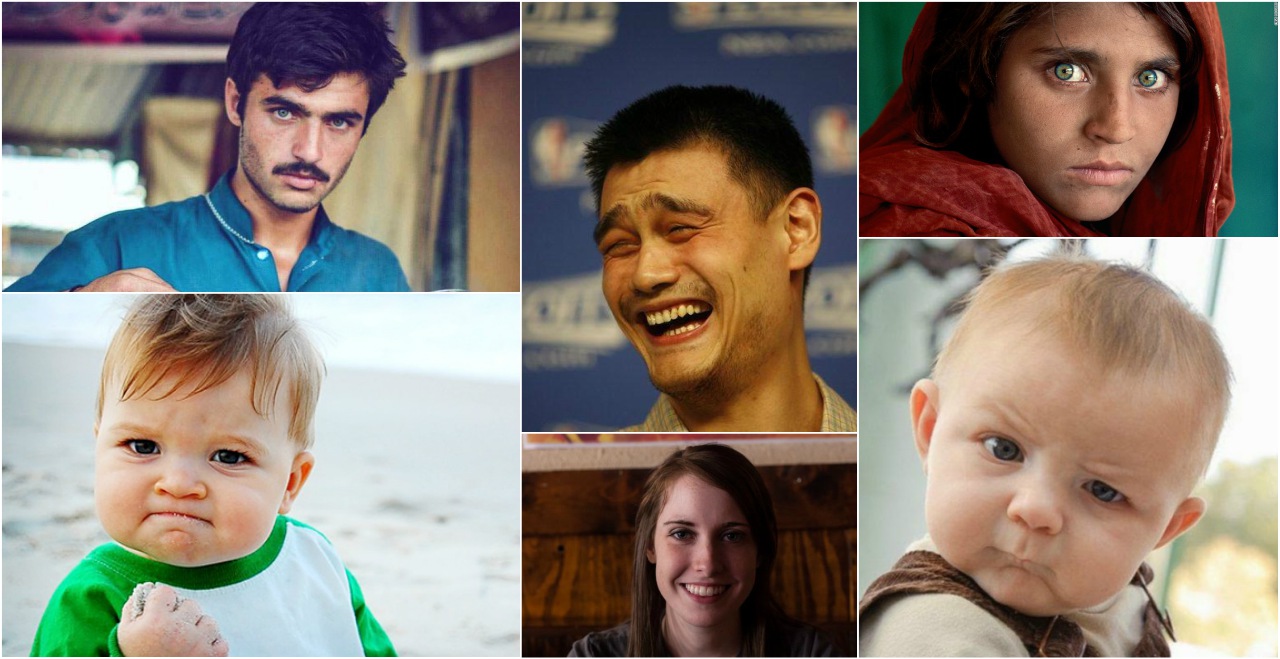 They say that fortune and luck, is just around the corner, puffing the stub, waiting for you to come along. Most of the times we fail to take that road, assuming it’s there to mug us. But some of us fortunately do. And then the world just stops and takes notice. The below list is of People who’ve accidentally become overnight sensations, thanks to the social media explosion, and have went onto define humorous outtakes ( through memes ) and cultural epitomes. So without further ado, let’s dive into the list of People, who we all know : Spencer is the kid on the cover of Nirvana’s groundbreaking album Nevermind, one of the highest selling albums of all time. The album had sold 2 million copies by the time he turned 1, and has sold about 25 million more since. Most of us have seen this toddler, trying to reach to the hook of the dollar bill. He inspired many retro posters as well, much like those below. Of course, Simpsons had to do something no?

Sevelyn Gat : The Girl Who Is Practically Everywhere :

She became an overnight sensation on Facebook after some of her “So bad that it’s good” photoshopped photos surfaced online. She edited the holiday photos of other people and replaced them with herself. She posted these photos on her Facebook which eventually became viral. As it were, she eventually landed an Internship with KuHustle, as a project manager, owing to the fame. Drawn to her famously haunting eyes, photographer Steve McCurry quickly made two shots of a 12-year-old girl, Sharbat Gula in a refugee camp near Peshawar, Pakistan, for “Along Afghanistan’s War-torn Frontier,” the cover story of the June 1985 issue. After her image appeared on the cover, she became known at the magazine as “the Afghan girl.” Recently, she made it to the news, as the Pakistan government undertook her deportation. However, Afghanistan embassy welcomed her back stating that she has been the face of the nation for long. Gula had been living in Pakistan’s northwestern city of Peshawar for years with her children and husband, who died five years ago. This is how she looks at present , Ever? Doubtful. But if you have been on the receiving end of Internet memes (on second thoughts, who has not?), chances are you have come across Sam Griner. This image of an 11-month-old Sam trying to eat sand was clicked by his mother, who then posted it on her Flickr page. Eventually, the fist-pumping pose of Griner earned him the moniker ‘Success Kid’. Here’s him all grown up : Bad Luck Brian is an image macro series featuring a photo of a blonde teenage boy wearing a plaid sweater vest and braces, accompanied by captions that describe a variety of embarrassing and tragic occurrences. On January 23rd, 2012, the original instance of the meme was submitted to Reddit by Ian Davies, a long-time friend of Kyle since elementary school, using a yearbook photograph of Kyle with the caption “Takes driving test . . . gets first DUI.”  This is how he rolls now, The story goes like this, A famous Nigerian photographer Ty Bello was doing a photo shoot for pop star Tinie Tempah at Yaba Lagos in Nigeria, when Jumoke, a bread seller at the time, accidentally walked into the shot. And the rest is history. Jumoke is now an international model, and apart from that, she was given a house in Lagos and a scholarship to learn taught Etiquette, Social Graces and grooming. This is where she’s reached now : Laina Morris is YouTuber and a part of one of the widely used image-macro. She rose to fame because of her spoof video cover of Justin Bieber’s song – “Boyfriend”. The video went viral after it was noticed by Reddit. It racked up more than 170,000 views on the first day. Morris initiated her own Internet fame, and she has embraced every bit of it. In 2012, she rode the initial wave to raise over $22,000 for charity, and has since established an entertainment career for herself. She has amassed more than 1.2 million subscribers on YouTube and puts out new content every week. Tardar Sauce Aka The Grumpy Cat : The cat rose to fame after the owner’s brother posted pictures of the cat on Reddit on September 22, 2012.
The Most used image-macro of all time, the grumpy-looking face of the cat is due to an underbite and feline dwarfismwikipedia.org. And yeah Cat’s are people too. The 29-year old Tabatha Bundesen (the owner of the cat) was a waitress before the cat became an overnight sensation. She left the job and in just a span of two years, she has earned over $100 million from the Grumpy cat’s paid appearance, book deals and modeling career and other endorsements. That is how famous the cat is – 16 million views on YouTube, 7 million followers on Facebook, 500,000 followers on Instagram, Multiple licensed product lines (including one for plush toys, one for iced coffee beverages and one for merchandise including T-shirts, phone cases and wallpaper), 2 books (Grumpy Cat: A Grumpy Book and The Grumpy Guide to Life: Observations from Grumpy Catamazon.com), 1 endorsement deal with Friskies cat food and 1 Lifetime TV Movie Grumpy Cat’s Worst Christmas Ever. Rita Gabiola, also known as The Badjao Girl, was discovered by photographer Topher Quinto Burgos in the southern province of Lucena in the Philippines. She was a beggar at that time. She’s now a model. Besides modelling, she wanted to finish her school and become a teacher. Korina Sanchez (Filipina television host) granted her with a scholarship to pursue education. While not necessarily a human that became famous by accident, when your face becomes stamped on a coin because of an Internet meme, you belong on this list. Known as Doge, Kabosu is an eight-year-old Shiba Inu rescue dog living in Japan. The dog’s owner is teacher Atsuko Sato who writes a widely read blog about her pets. Unbeknownst to her, one of her photos of Kabosu was lifted from the site and turned into a meme. The meme was simple, and in reality, kind of absurd, superimposing grammatically incorrect, broken English over top of pictures of the dog. The extraordinary life story of a Chinese homeless man who shot to fame after his photo was posted on the internet is to be made into a movie. Cheng Guorong became an unlikely sex symbol after he was forced on to the streets when he was fired from his job and robbed of his savings. The 34-year-old was snapped by an amateur photographer as he wandered the streets, begging for food and rummaging in bins for cigarette butts.  With his long unkempt hair, scraggly beard and prominent cheekbones, Mr Cheng was dubbed ‘China’s sexiest tramp’ and ‘Brother Sharp’ when the images of him were posted online in January. His distinctive look caught the eye of the photographer as Mr Cheng walked the streets of Ningbo, east China. The rest is history. This is what he is upto now : This chaiwala has stormed the internet, with his peircing eyes and handsome facecuts. He has become world famous now. Thanks to the keen eyes and photographic skills of Jiah Ali and the internet’s fetish for beauty, the simple is an astounding model these days. It is a sketch of Yao Mingwikipedia.org. Retired NBA player from China. He was the tallest active player in the NBA, at 2.29 m (7 ft 6 in). He played for the Houston Rockets. This sketch is famous as “Fuck That Guy”, “Dumb Bitch” or “Bitch Please”. It is a rage comic-style contour drawing of the professional basketball player Yao Ming wearing a hearty smile. The image is typically used as a reaction face to convey a dismissive attitude towards someone else’s input in online discussions, then usually following something that one ups their input. The drawing is based on a stillshot photograph of Yao Ming captured from a post-game press conference in May 2009. At 1:29 in the video, the athlete is seen making the face after his teammate Ron Artest leaves the site of interview. The kid in the meme is popularly known as “Skeptical kid” by the internet world. His real name is Mason. Mason’s original photo was taken at the Museum of Natural Sciences in Raleigh, North Carolina, by Jarod Knoten, in which he was pictured with his father Dave.The photo was then submitted to Reddit where it spread like wildfire.

Noah Ritter – The Know All Kid :

When WNEP reporter Sofia Ojeda attended the Wayne County fair in Eastern Pennsylvania she would not have not realized that she is going to make a kid a celebrity. She decides to interview the precocious 5-year-old NOAH RITTER about the fair. Ojeda asks him about the ride he went on, and then he starts, and hasn’t stopped till now. Ellen Degenres loves him, and is one of the most famous stars of this show. And he been invited to a lot of talk shows and news channels. That’s all folks…Hope we can extend this list of Amaing People over the coming months.